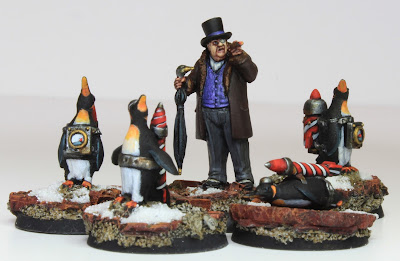 Finally, I have this mildly amusing diversion completed and photographed for your delectation.  I think that I underestimated just how much Tim Burton's magical imagery affected the young Awdry as, from the outset, the idea of recreating the Rocket Penguins from 'Batman Returns' became almost obsessive as my 'Penguin Crew' developed. 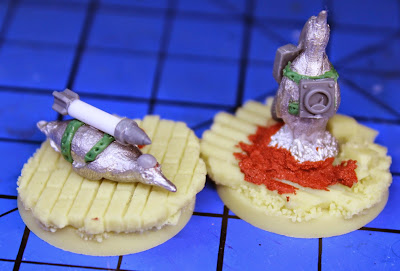 The project got off to a flying start* with Mark Complestone's 'Frisky Penguins' proving to be the perfect base for my machinations.  Once pinned to 25mm 'Old Factory' bases, again from 'Element Games',  I was left scratching my head and thinking, "now what?"  I knew what I wanted to achieve, but how to get there?  Old biro pens were dismantled and discarded, a thorough rummage through the spares box failed to yield exactly what I was after, but finally inspiration struck!  Yes the 'Google Fu' was strong with me as I stumbled across 'Bitz Box', a site specialising in Warhammer and Warhammer 40K parts.  I rushed around the virtual aisles loading up the trolley with various ordnance, the Burnas, Lootas and Flash Gitz sections yielding a particularly fine array of projectiles!

*Perhaps an unfortunate turn of phrase given that these are flightless birds! 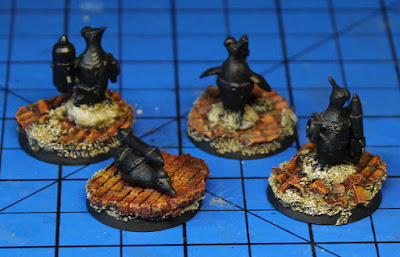 The postman, oblivious to his complicity, delivered my plastic arsenal and the fun began.   'Awdry Towers' was alive with a frenzied snipping, sawing and filling and finally I emerged from my build with the a hearty 'Eureka' and the Rocket Penguins were born!

I have to confess that once paint was applied I was delighted with how they came to life,  although I had absolutely no idea as to any reasonable use for them.  Subsequently, Kieron of 'Cheaphammer!' fame has suggested that they might make good ammunition objectives for the Batman Miniatures game, justifying my flight of fancy by giving my waddling weapons a purpose! 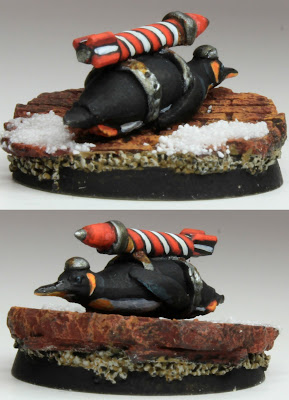 "Some birds fly South for winter, whilst others tough it out!" 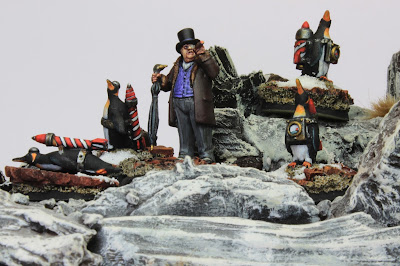