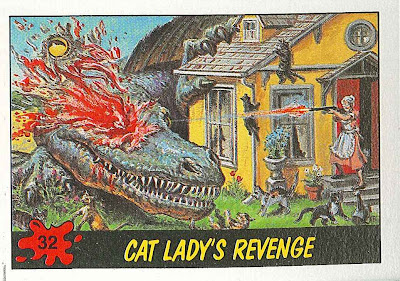 With the 'Mars Attacks!' Kickstarter now successfully funded* and the self indulgent frippery that is Dinovember gathering pace, I thought I would share another of my collections of Topps Trading Cards.  So this, then, is the briefest of posts to launch the new 'Dinosaurs Attack!' page; the tab is located just below the title banner, but be warned!


*My goodness that turned out to be an expensive introduction to the world's largest funding platform!

'Dinosaurs Attack!' is a trading card series by Topps, released in 1988, and containing 55 cards and 11 sticker cards.  From the offset it needs to made clear that these cards contain images of graphic, comic violence and gore akin to the 1960s 'Mars Attacks!' cards and even the 'Civil War News' collection.  While 'Mars Attacks!' was a parody of alien invasion movies, 'Dinosaurs Attack!' was supposedly inspired by monster movies such as The Beast from 20,000 Fathoms and Godzilla. 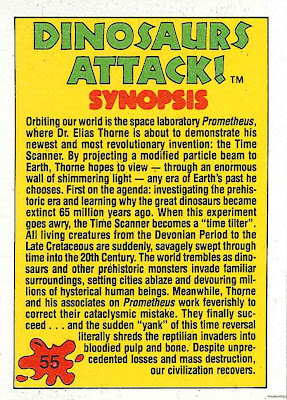 The story, such as it is, tells of dinosaurs transported through time as a scientific experiment goes horribly wrong.  The imagery is very much of its time, intended to be shocking, but now looking decidedly dated.  Whilst many of our favourite dinosaurs are featured, they are often portrayed with glaring inaccuracies in a bid to sensationalise the series.  Laughably ridiculous in their design, the cards still hold a nostalgic quality of a time when all seemed lurid and vulgar beyond the pale - after all, do you remember fluorescent socks?