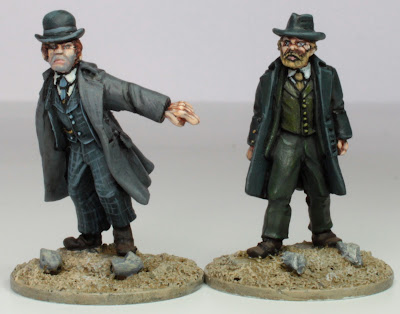 It was no good they kept calling to me and so were rapidly promoted through the ranks of discarded lead to the point were I just had to paint them!  These then are my first efforts with the miniatures designed to accompany 'In Her Majesty's Name' and available through 'North Star Military Figures'.

So why a Chief Inspector and Sergeant from the Scotland Yard Company?  Simply put 'Ripper Street', the BBC's crime drama set in Whitechapel in London's East End in 1889, six months after the infamous Jack the Ripper murders and a breath of fresh air to the scheduling.  Certainly a favourite here at 'Awdry Towers' and clearly the inspiration behind these two fine sculpts. 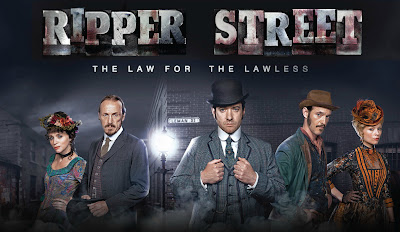 Although pleased with the sculpts I have to report that there was a fair bit of flash and one or two prominent mould lines that needed to be dispensed with before painting could begin in earnest.  As for the palette, I was predictably drawn to the characters from the series, Inspector Edmund Reid and Sergeant Bennett Drake.  The costumes in the series were particularly good and there was plenty of reference available, but in the end it was greys and blues for the Inspector and more earthy hues for his trusty Sergeant.

Great fun to do, but I'm afraid the rest will have to wait their turn for a little while longer, but an encouraging start nonetheless.