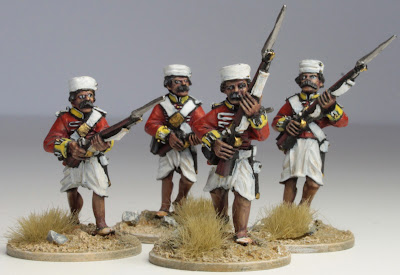 I suppose it was inevitable really!  Having recently completely the 'Badmash Militia' I put them along side my other, somewhat dusty, mutineers only to groan at the discrepancy in their bases.  The original chaps, again from 'Mutineer Miniatures' had been done when I was even less focussed as I am now, if that were possible, and when I had no real idea about what I would do with them when completed, they were simply a cathartic diversion.
(the original post can be found here) 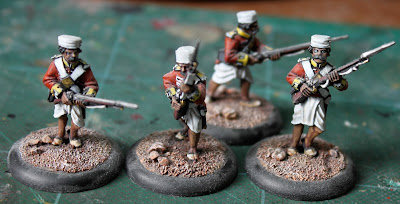 As a result, I treated each individual miniature as a little treasure or victory and felt that the lipped bases rather added to this; now perhaps a little wiser, and with the knowledge that there are some rather splendid skirmish rules out there, it seemed appropriate to have a more uniformed appearance.

Although it has proved to have been a busy week at work and that I didn't feel suitably alert enough to do any painting in the evening, I've managed to get this little job off the table and jolly pleased I am too.  Reunited with the Militia, below, and safley housed in a 'Warbases' movement try. 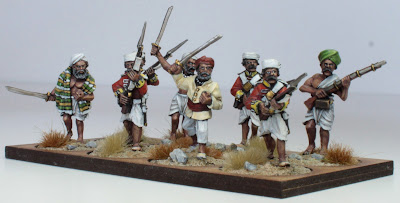