...the return of the 'secret project'! 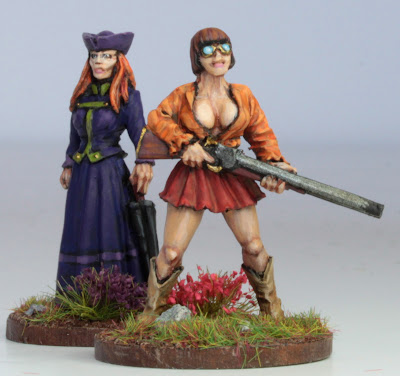 Miss Daphne Hudson, the spirited niece of Holmes' former housekeeper was privately educated  at Roedean  thanks, in no small measure, to the generous stipend that the consulting detective had set aside for her.  Always meticulous in her appearance, Daphne was due to take the social scene by storm, but tragedy struck when a ferocious bout Dengue fever claimed the lives of her parents whilst travelling abroad.   Grief stricken, Daphne missed her Debutantes' ball  and her opportunity to shine on the glittering social circuit.  With few options left open to her she has reluctantly chosen to follow her  'adopted'  uncle on his lecture tour of the United States armed only with her late father's umbrella.

'By Jinkies!'  Velma, Dr Watson's wayward ward, has a reputation for being a hellion.  Although awarded a place to read the relatively new social science of  anthropology at St. Hilda's College, Oxford, Velma quickly became frustrated by the inequality between the sexes at British educational establishments at the time.  As a result this wildcat has shunned academia for a chance to explore the grand old U.S. of A. enjoying the relative freedom from the restrains of polite society and the stifling dress code that goes with it.  A veteran of her father's grouse moor, Velma is an expert shot!

Now as departures go this one is a little left field, even by my standards.  The self indulgent folly that is the 'secret project' is simply an excuse that allows yours truly to meld together all manner of unholy combinations from mythology, folklore, popular culture and of course earlier episodes of 'Scooby-Doo, Where Are You!' 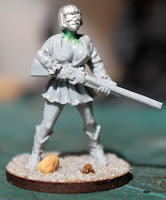 This ridiculous construct allows me to collect pretty much anything that grabs my fancy without ever having to worry about gaming it and today I'm proud to reveal the latest characters, Daphne and Velma erstwhile travelling companies of our heroes, S. Holmes Esq., Shaggy Watson and Baskerville.  This ludicrous piece of frippery has been sitting on the back burning for a while now, whilst suitable characters were tracked down, but it wasn't until 'Salute 2013' that inspiration struck.  My curiosity was piqued by the swarm of customers around the 'Black Scorpion' stand.  The release of their new cowgirls set was certainly causing quite a stir; nothing at all to do with the delightful young lady that was serving behind the counter!  It was from this new cowgirl set that Velma was born, the resin of the 'Black Scorpion' piece allowing for a simple head swop from a 'Hasslefree Miniatures', 'Louise' (what will I do with that body!) I did try to file the angular glasses frames to something more rounded, but conscious that one slip would result in an unplanned nose job, I bottled the job!  As for Daphne, she came from 'Black Scorpion's' Civilians 1 group, with both ladies adopting a colour palette inspired from the original Scooby Doo cartoon. 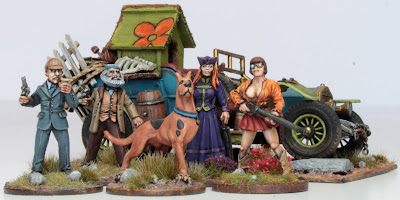 So there we have it, the travelling companions finally reunited and ready for more adventures, but sadly these will have to wait for the moment as the St. Trinians zombie hunters are calling! 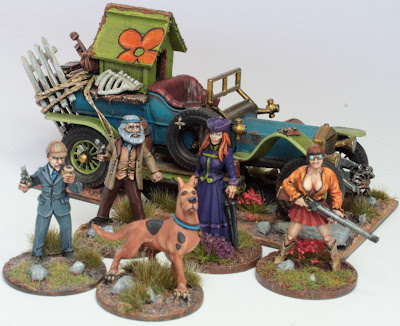