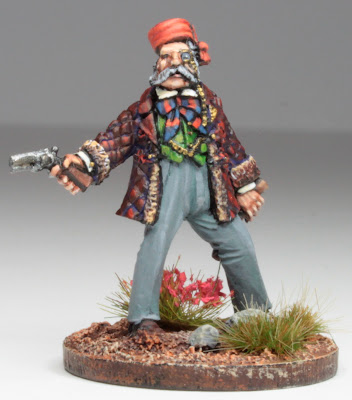 With the day job demanding much of my time and the prospect of very little 'let up' for the foreseeable future, many of the great plans have been scaled back at present. That said it is important to have an outlet and this chap proved to be just the tonic! Originally sculpted as part of the ‘Gentlemen’s Club Faction’ for the very tempting ‘Empire of the Dead’ rule set this characterful chap made his way to ‘Awdry Towers’ via Dave Docherty of ‘One Man and his brushes’ fame. Clearly destined for the annals of the ‘secret project’, it has taken until know to flesh out his character in both words and paint.

It was said that Mycroft Holmes’ deductive powers were even greater than those of his younger brother and although it was never clear as to what role he held in the Government of the day, Sherlock once spoke of his brother thus,

“Occasionally he is the British government... the most indispensable man in the country.” *

It would appear that Mycroft’s ability to take the merest sinew of an idea or the whisper of a secret from the far flung corners of the Empire and bind them together to form a clear narrative forged what we now take for granted as the work of the Intelligence Community.

“The conclusions of every department are passed to him, and he is the central exchange, the clearinghouse, which makes out the balance. All other men are specialists, but his specialism is omniscience.”*

The relationship between the two brothers was not always as harmonious as it is now with Mycroft spending most of his time at the Diogenes Club, which he co-founded and was perceived by many as been apathetic at best. In Sherlock’s own words,

“...he has no ambition and no energy. He will not even go out of his way to verify his own solutions, and would rather be considered wrong than take the trouble to prove himself right. Again and again I have taken a problem to him, and have received an explanation which has afterwards proved to be the correct one. And yet he was absolutely incapable of working out the practical points...”**

However with retirement from the higher echelons of Public Office, Mycroft was left with an unquenchable desire to combat those forces of evil that were beyond explanation. Shunned by many as an unbalanced eccentric, Mycroft has become the world’s foremost expert of all things paranormal and supernatural; not surprising then that the term ‘Spook’ is now used to describe the very person that Mycroft helped to establish. When Sherlock was faced with a problem beyond all reasonable explanation then there was only one person he was going to call – Mycroft Holmes.

My first thoughts, when I started this miniature, were that it was a little on the slender side and overly intricate and ‘fussy’, but how wrong I was! This was a joy to paint and just what I wanted after working with the larger, more robust miniatures of ‘Redoubt Enterprises’. If the others in the series are the same then this might become a temptation too far! Regardless of whether or not I capitulate to ‘Empire of the Dead’ I must once again thank Dave for his generosity and encourage all to visit his rather splendid blog, ‘One Man and his brushes’.

** "The Adventure of the Greek Interpreter" – Sir Arthur Conan Doyle 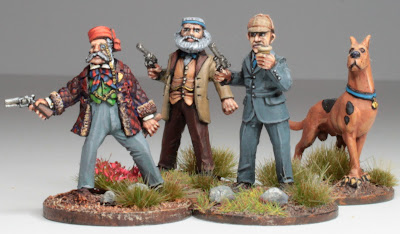