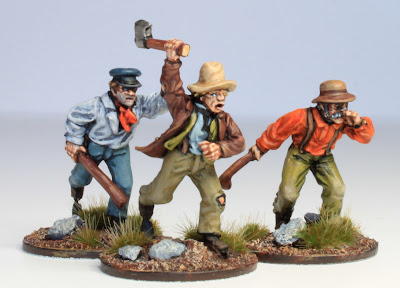 More 'good ol’ boys' for the ‘secret project’!  Once again a selection from the wonderful ‘Perry Miniatures’ American Civil War rioters pack, this time with hand weapons as opposed to firearms.  I have selected those that I thought could pass for woodsmen, farmers or local businessmen from late 19th to the early 20th century.  Half the fun has been coming up with colour palettes that have a bit of individuality to them whilst still holding the chaps together as a unit. 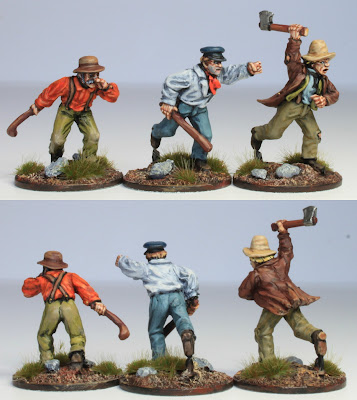 As with the Dinosaurs, the ‘secret project’ continues to be a huge distraction, but at least I’m starting to write some of the ideas down now.  Broadly speaking it all happens somewhere that is not that dissimilar to what is now known as the Pacific Northwest of America, sometime in the final throes of the 19th century and early 20th century.   A series of seemingly unrelated and bizarre incidents plague the area and its inhabitants; at present these gentlemen.


But what are they running from?  Wolves, bears and large-footed beasties aside there would appear to be an even more mysterious and potentially dangerous creature hiding in the woods.  All will, hopefully, be revealed soon!