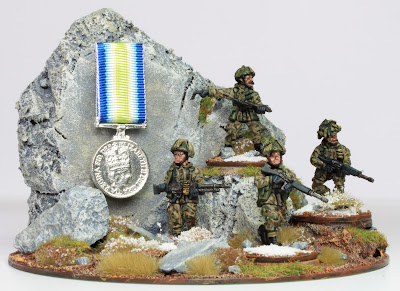 As hoped I've managed to finish off the vignette to accompany the modern British infantry that were completed to commemorate the cessation of hostilities over the Falkland Islands thirty years ago.  A simple blank CD base and a few off cuts of foam and other bits and pieces that I had lying around, have all been thrown together to recreate the tough and unforgiving terrain found in the South Atlantic.

I did treat myself to a replica, miniature South Atlantic Medal bought from the National Army Museum's online store.   The Campaign medal was awarded to all personnel who took part in operations.  To qualify the recipient had to have at least one full day's service in the Falklands or South Georgia, or thirty days in the operational zone.  A rosette was added to the ribbon for those who served in the combat zone. 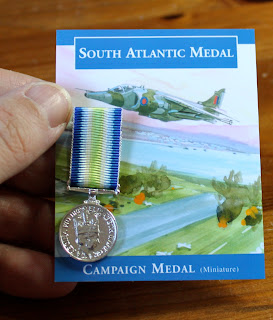 Coincidentally as I was finishing the miniatures, Curt posted a rather thoughtful piece entitled, ‘A Question of Historical Wargaming: 'Ok, Who Wants to be The Bad Guys?’ on his marvellous ‘Analogue Hobbies’ blog.   The post was a reflection on the appropriateness of wargamers playing more modern conflicts or conflicts that included scenarios that were perhaps a little troublesome to square away.  I didn’t comment at the time, the post demanding a bit more in the way of a response than the customary winking smiley!  That said I found myself concurring with many of the issues raised by Curt and indeed many of the considered responses from fellow bloggers. Why mention it here?  As a young boy, I too, was excited about the prospect of our boys going to take back the Falklands from the Argentinians – once we found exactly where they were on a map that is!  As the reports of the conflict started to filter home it became apparent that this bravado was going to have a real human cost for both sides.  Warfare suddenly leapt from the history books and was propelled to the domain of the headline news; I know that I found the whole experience very confusing.

Now somewhat older, if not wiser, I find myself painting 28mm miniatures representing a variety of different periods from history.  Ultimately, I am doing little more that painting pieces of lead and plastic that represent the past, I’m certainly not looking to make any form of political statement or show any disrespect to those that fought and died in any of the conflicts.  I do not condone war or any of the political ideologies that bring about conflicts, but I am happy to commemorate the bravery and sacrifice of individuals. 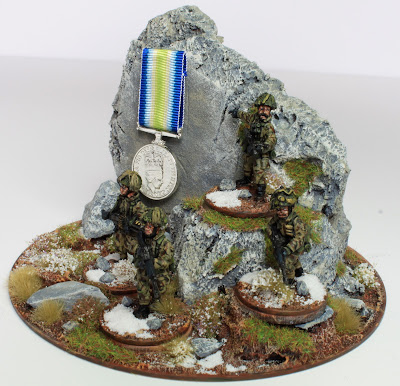 Many of the comments that followed Curt's post displayed a thoughtful and balanced consideration to just such matters.  One that seemed to resonate more than others was by Sidney Roundwood, who said;

Perhaps (at least for me) the hobby has a great deal to do with commemoration. I'm comfortable playing a game when one of the aspects is commemorating and respecting what happened in history.


Certainly a sentiment that I'm happy to side with.