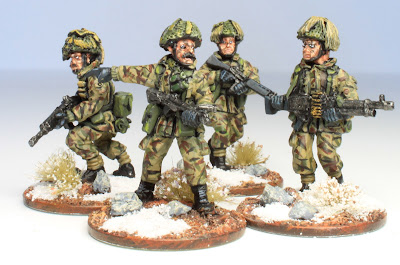 The Falklands War ended thirty years ago today with the surrender of the Argentine forces to Major General Jeremy Moore.  It seems incredulous that time has passed so quickly and when perusing the various trade stands at ‘Salute’ in April, I came across these ‘Mongrel Miniatures’ on the ‘Newline Designs’ stand.  They are diplomatically labelled as NATO forces, but are wearing suitable attire to represent the British forces at the time of the conflict. 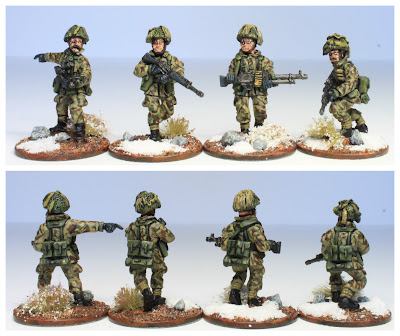 I had hoped to produce a little vignette for the occasion but simply ran out of time, but I'm hopeful to complete the project over the weekend.  These are my first attempt at a camouflaged uniform and I have to admit to being a little apprehensive at the start.  In the end I had to dig out my old cadet force smock from the loft of ‘Awdry Towers’ in a bid to try and fathom out in which order the colours went down to create the  DPM look.

When I first started to clean up and prepare the miniatures I didn’t think they were particularly well sculpted - the barrels of the SLRs seemed a little stunted, that sort of thing, but I soon changed my mind when the undercoat went on!  As with so many things, they are what you make of them and these proved to be no exception to the rule.  There were some lowly little touches like the binoculars tucked into the officer's smock and the first field dressing taped to the '58 webbing of one of the riflemen. They really were tremendous little miniatures and I’ve thoroughly enjoyed what I assume will be a very brief jaunt into the modern era; but then again!