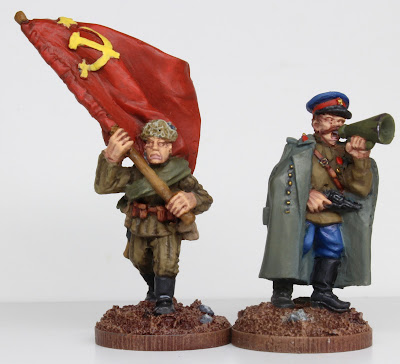 All a bit of a rush to get this post in before returning to work tomorrow, but these represent the command element of my Soviet Army.  I haven't decided on the final make up of the command structure and so have options for most eventualities including a standard bearer and Commissar... 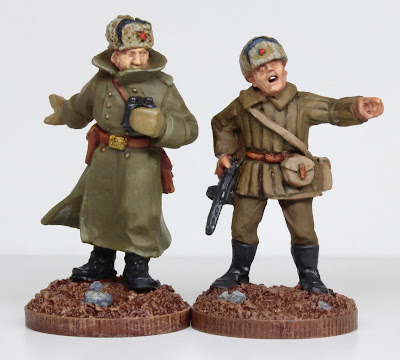 With a senior Lieutenant and NCO.  The Senior NCO is a bonus figure as I wanted to have a look at the compatibility of other ranges and this one is from 'Crusader Miniatures' purchased through 'North Star Miniatures' and I think fits in pretty well.  The Crusader sculpts are a little simpler, especially the weapons, but certainly close enough to bolster the troops if required. 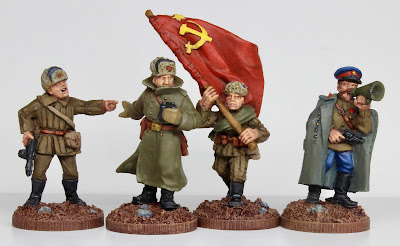 So what next?  Well this has completed the rank and file, so to speak, and has been a genuinely rewarding experience, selecting miniatures, preparing them and then completing the painting - not something I am renowned for.  Obviously the Army list contains other elements including an anti-tank detachment, artillery, trucks and of course a tank, but none of these are ready to paint and so I have reached a bit of a natural hiatus. 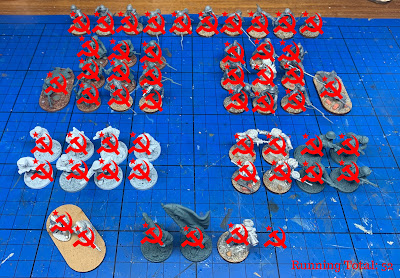 It has been so lovely to reconnect with a good many like minded folk and I can't thank you enough for your continued support throughout the summer.  I certainly have plenty of 'fun' things to pootle around with and it may be that as the new academic year gets underway that hobby time becomes a priceless commodity again.  Hopefully, though, I can continue to make the odd post to record progress and keep the momentum going.