As the new academic year lurches into sight, there is a palpable sense of urgency here at 'Awdry Towers'.  Early morning alarms are being set to steal an hour or so of precious painting time before the day begins proper, but I am pleased to report that progress has been made. 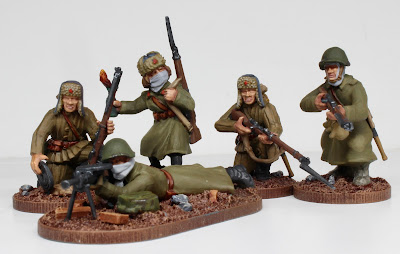 More of the same, I'm afraid, but there are one or two slight variations on the theme.  That said producing a core force of over fifty miniatures that actually hangs together, stylistically, is a bit of a first for me.  This then, the second of my wintery Soviet Army rifle sections with Light Machine Gun support.  The young lady about to launch the Molotov cocktail has already been counted in the tally, having been showcased recently, but this is where she will be based for any games.

Time to move on to the command section and the sniper team, but waiting in the wings are no end of extras including anti-tank dog units, artillery support and other vehicles; starting to think that I need another holiday! 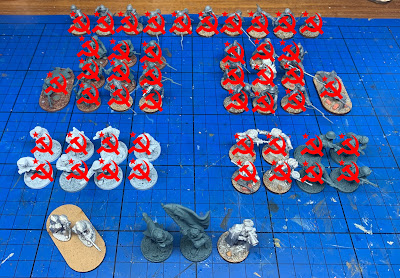