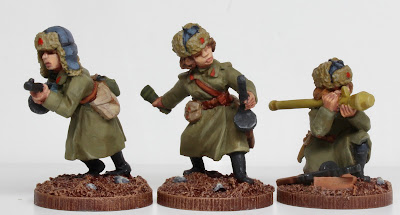 Despite the stifling heat down here on the South Coast, not that I am complaining you understand, I have managed to paint up 'most' of the second veteran unit for my wintery Soviet Army. I had hoped that the 'Warlord Games' Siberian Veterans box was going to account for most of its number, but I just wasn't happy with what were effectively the same sculpts that I was using for my other two rifle sections; fortunately a solution was found when serendipity played her hand. 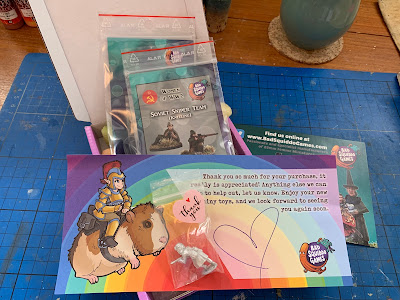 When gathering the initial troops for the list, I knew that I wanted a sniper team, but felt that the 'Warlord Games' team was wintery enough for my liking.  In searching for a suitable substitute, I stumbled across 'Bad Squiddo Games' whom I have used before for all manner of wonderful scenic items.  Having spied a couple of likely candidates, I duly ordered them up and in her customary timely manner, Annie had them dispatched and winging their way to 'Awdry Towers' before you could say 'hosepipe ban'. 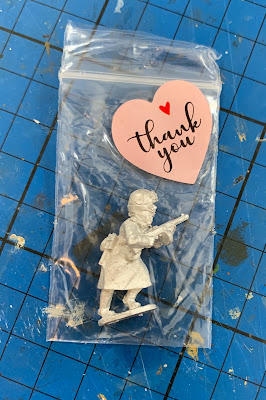 What I wasn't expecting was a delightful little thank you for my custom, another female Soviet combatant, this time toting a PPSh-41 sub maching gun with drum magazine and in winter uniform; an idea was forming!  Closer scrutiny of the Bad Squiddo webstore unearthed another couple of packs that I felt I could use and before long an order was placed, although this time through 'North Star Miniatures' as I was curious about some of their Crusader Miniatures Soviets. 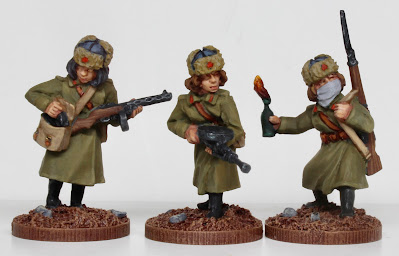 With regards to the quality of the bad squiddo miniatures, I am happy to report that they are excellent, nicely cast with very few lines and no extraneous flash.  Characterful poses that scale-wise fit in well with the other miniatures that I have used, they are uncomplicated making them an absolute joy to paint.  The ladies have collar tabs and I have picked these out in red, mostly for aesthetic reasons as opposed to any thought for historical accuracy, but I have to say that I am really rather chuffed with them. 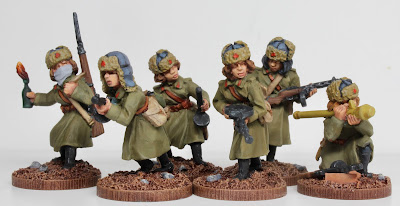 As my veteran units are all going to be armed with sub machine guns, if not carrying a light machine gun, I added an extra weapon carefully placed on some bricks, for the soldier kneeling and firing the captured Panzerfaust.  Meanwhile the fearsome lady about to hurl the Molotov cocktail will find herself in the final rifle section when it is finished.
What of the sniper team, I hear you ask?  Well they are primed, but I am still deciding how to base them and so remain firmly stuck to their lollipop stick for the time being.  If you look carefully you can see the final members of the the ragtag veteran unit lurking in the background, waiting to be painted so that they can joy their sisters. 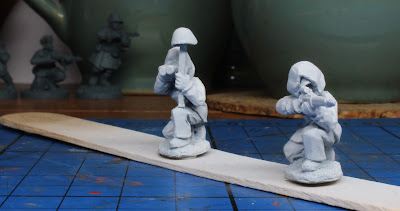 Thank you then, Annie, of 'Bad Squiddo Games', whose generosity of spirit and quality of service resulted in me adding more of her fine miniatures to the army and which have, in turn, help give the existing troops a truly unique feel. 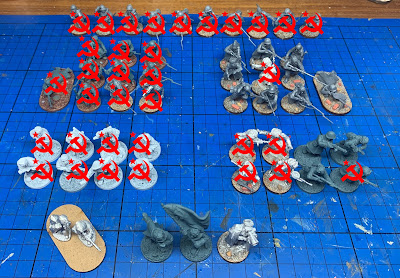