On the turn of a card. 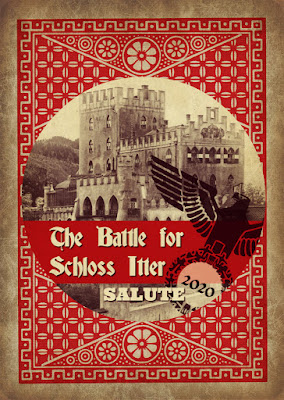 I thought I would just share some of the concept work that has been done for what we are calling the 'Chance' cards.  Various loot markers will be situated throughout the terrain; these can be investigated by using the 'Oh, Shiny!' action.  The player will draw a chance card to see what they have found, but be warned some cards have negative effects!

I had an idea that I wanted the deck to resemble an old and worn pack of playing cards, adding the logo that I had created at the centre.  Looking at it again, I can see some faults with alignment and have probably overdone the wear and tear, but got close to where I wanted to be. 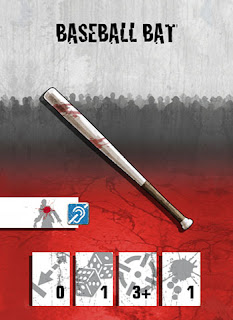 Concept wise the cards in our game owe much to the 'Zombicide' game and so it seemed fitting to start there when it came to design.  For the benefit of those who are unfamiliar with Guillotine Games' Kickstarter breaking phenomenon, Zombicide is a collaborative board game where the players 'search' for equipment by drawing cards.  These can give a survivor's chances a boost with the addition weapons or artefacts, sometimes having to be combined to increase the value or strength of the item.  The cards might also have an impact on game play, sometimes for the worse!  Above is a typical example of an equipment card and as I was reviewing them, I was suddenly struck by the black, red & white colour scheme, which echoes the German Imperial war flag design and had been a consideration when thinking about palette for this adventure.  As a result, I shamelessly stole payed homage to the card design and added our theme to their existing background. 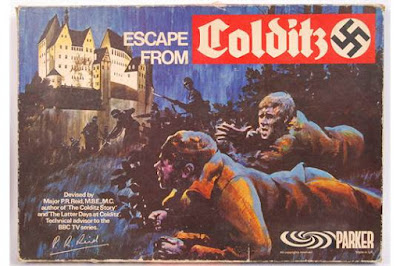 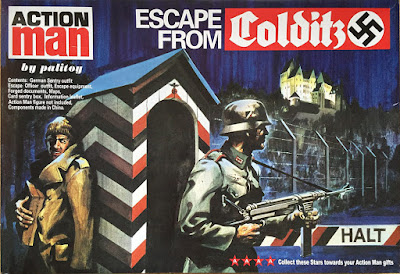 I was aware of the box art for 'Escape from Colditz' board game and Action Man set and was channeling these themes, along with the Commando comics of my youth.  I was interested to discover that the 'Escape from Colditz' game also came with equipment cards and that theirs had historical information relating to the various escape attempts.  Again this was something we had considered and so will be looking to add facts about the battle to ours; after all our core goal is education. 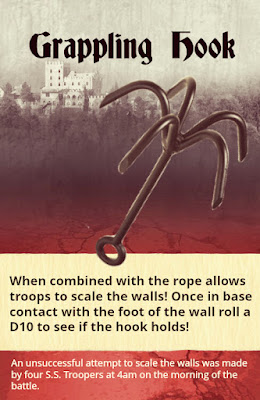 With a design concept in place, I thought it only right to try out a few ideas for actual cards.  I have had to learn a few new skills along the way, but quite excited at the results.  Obviously there is a need for consistency, particularly when applying fonts and filters, but these examples are done to show a variety of ideas for discussion rather than a finished article.   I imagined any historical information at the base of the card and the light colour on red, seems to work well, making us realise that this is relevant, but separate information from the game itself. 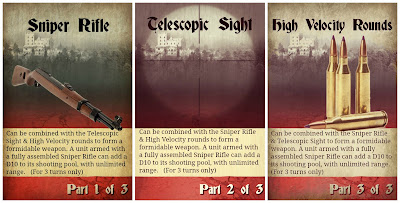 Another concern was how do we show that some elements can be combined?  A simple numerical solution perhaps?  There is a lot of information on this set of cards and I wonder if all is necessary?  As always, these are just my thoughts and any additional considerations about them or their development can only be helpful so please don't hold back. 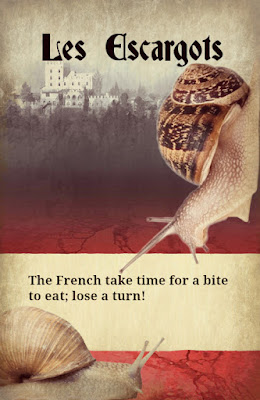 I have been considering the possibility of two separate decks, one for the attackers and one for the defenders, but it might be easier just to have the one that can be recycled when exhausted.  If that were to be the case then some of the cards may well be duplicates for example Ammunition, but at the same time it would be nice to have a good variety of items.

The 'Chance' cards  could seriously change the outcome of the game for the individual player.  This uncertainty hopefully adds some fun to the proceedings and a random element to the game play that echoes the fog of war.  We already have a good number of cards worked up, but we could do with some more suggestions.  Below is a list of ideas that have not yet been completed, please feel free to add any suggestions as to how they might be used, or better still come up with some new ones for us.

In addition if anyone knows of a good source for having cards printed up, do please let us know, thank you.