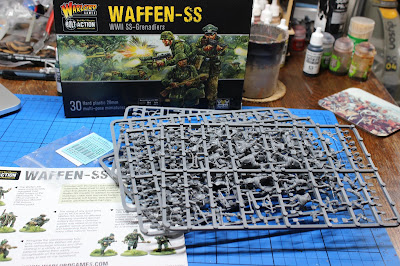 I have taken a liking to the 'Warlord Games' plastic miniatures as a quick, and relatively cheap way to build up the units required.  So to represent members of the SS 17th Panzer Grenadier Div. that attacked the Castle on that fateful day in 1945, I have gone for the late war Waffen-SS Grenadier miniatures.  By way of a test, I assembled a couple of frames and found myself spoilt for choice with a myriad of options.  In the end I decided to keep things relatively simple for this first run out and based them on 20mm MDF discs from 'Warbases'. 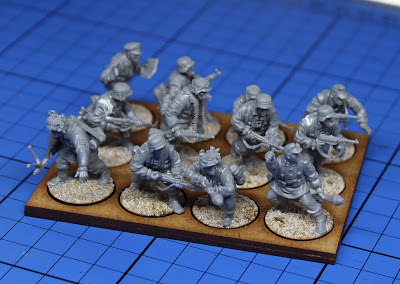 The quality of the sculpts is just amazing, so many fine details and expressive faces, but when it came to painting, I was a little apprehensive.  This is area that I have very little knowledge of, and although I have tried camouflage patterns before there seemed so many to choose from!  Armed with a clutch of new Osprey titles and some rather good painting guides, I started to make some decisions as to which uniforms these chaps would have. 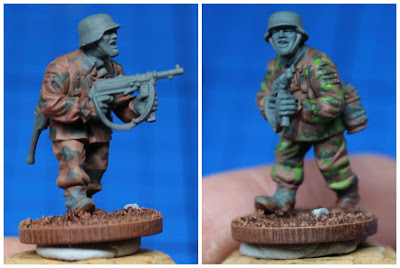 My rather rudimentary research suggested that the Oak Leaf pattern was the way to go and given that the battle took place in May, I would focus primarily on painting the spring side of the reversible smock.  That said, I understand that veterans would often mix and match items of uniform so there was a fair bit of leeway. 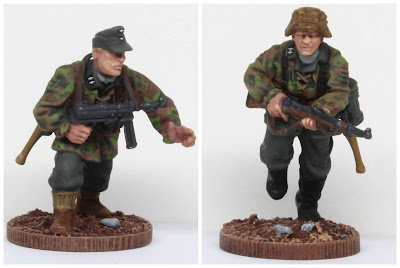 Once primed, I gathered together the requisite colours and set about try to replicate the camouflage pattern.  Given the scale of the miniatures, I wasn't unduly worried about the finer details, just happy to 'sell' the illusion.  The initial green chosen seemed a little bright to begin with, but a heavy wash did the trick and by the end I was achieving a pleasing result. 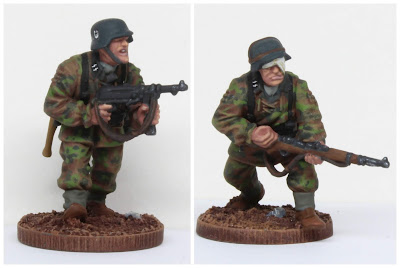 As these were, in effect, test pieces I was happy to try out a few different ideas and evening had a stab at the autumn pattern on one of the helmet covers.  I wasn't sure that I wanted to do include the runic insignia SS, but the miniatures come with some waterslide transfers.  These are insanely small and their application was accompanied by a fair amount of colourful language, but the result is rather effective. 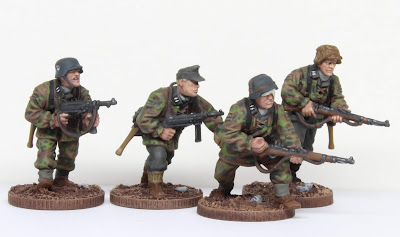 Four done another twenty one to go!  Hopefully the next batch will be a little quicker now that I have an idea of the colours to use.