Flight of the Storch 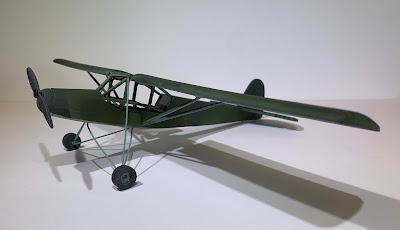 Those regular readers of this most humble of weblogs will be only too aware of my butterfly like approach to projects.  Seemingly unable to focus on anything for any given period of time, projects have been known to stutter and stall just when they were coming to fruition.  Now in my defence, I would suggest that this is just a mechanism that allows me to keep my imagination and creativity ticking over, but it would appear that even before the Castle build is complete, I seem to have sauntered off to consider other elements!

There is no doubt that that this project is all about the Castle; the fact that we are building a game around it a secondary thought.  That said we are, at some point, going to need to consider what else is going to be on the table?  We know that the forests surrounding the Castle will have loot markers strategically positioned, along with some artillery pieces, but what else? 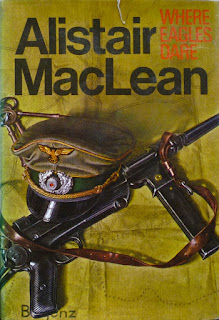 It is no secret that I like a popular culture cross over.  Movie related miniatures, a nod to a piece of literature or poetry are all fair game in my hobbying world.  So when I was imagining what might make an interesting feature for the dense forest, I couldn't help but consider the likes of Alistair MacLean's oeuvre or the adventures of a certain Dr. Jones.  One of MacLean's most successful tales, Where Eagles Dare, went on to be made into a splendid film, staring the likes of Richard Burton and Clint Eastwood.  The opening scene tracks the flight of a Junkers Ju 52 through the Austrian mountains as the drum beat intensifies, all very stirring stuff and another personal favourite of Young Master Awdry. 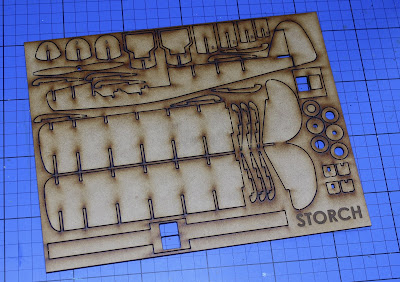 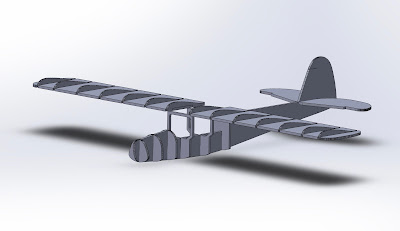 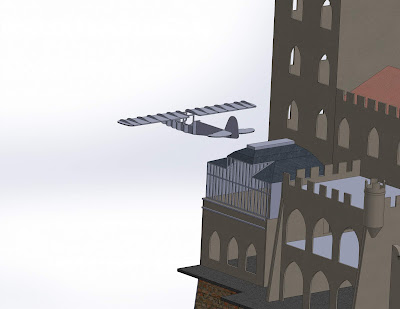 I started to wonder if we could have our own plane?  A crashed Fiesler Storch perhaps, its cargo of lost Nazi gold spilling out everywhere, possibly the last resting place of the Ark of the Covenant?  Now clearly such a fabrication has no place in the original story of Schloss Itter, but who would begrudge me a spot of artistic licence?  This posed the nest question, where does one find a 1/56 scale Fiesler Storch?  Well the answer is you design and build your own, of course.  I have made mention of James' skill in using the computer to draw out his ideas, all the time considering the construction of any given piece.  When the muse grips him, James is unstoppable and appears happiest when his is designing and building, it matters not what.  Within a day of a throwaway conversation a Mark I prototype was drawn and cut, with modifications starting as soon as the construction process began. 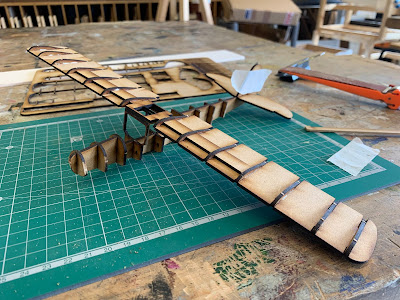 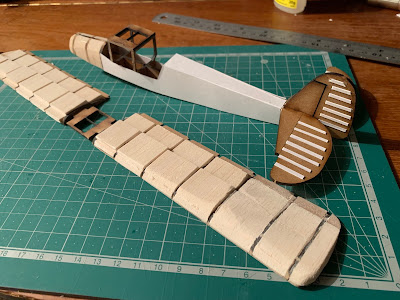 I watched, giddy as a schoolboy, as James tinkered around, adding balsa wood to create a more substantial shape to the angular frame, lifting it beyond your average MDF kit to something much more special.  Cocktail sticks and tissue paper were applied and the kit was starting to take shape, just the small matter of painting it remained. 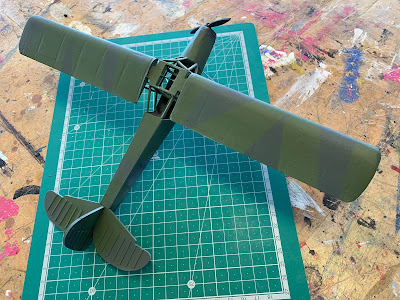 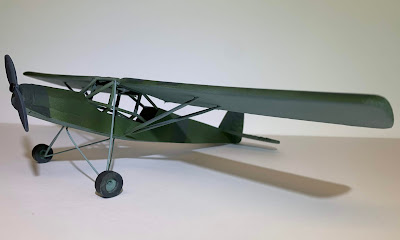 I should point out at this juncture that the images you see here are all of James' progress.  This is a side project that has really caught his imagination and he has continued to re-visit the original drawing adding seats, propeller and addressing other construction issues as they arise.  Painting saw him fire up the trusty airbrush and even give the plane some camouflage patterns, before turning his attention to the smaller details. 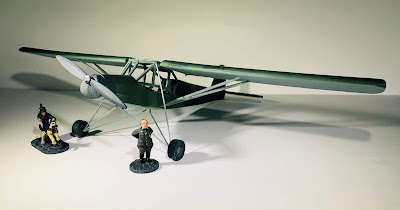 All was progressing well and as my thoughts started to turn to 'crashing' one of James' kits we inadvertently stumbled across a small problem.  It would appear that not remaining on task is contagious and that my affliction had been passed on to James!  As I popped into the the studios earlier this week, I was greeted with a cheery, "Watcha, look what I've done."  There before me was the caracas of a 1/56 scale Hurricane!  James, clearly unable to sleep, had completed the drawing overnight and had already started to assemble his latest construction.  What was staggering was the size of the Hurricane next to the Storch, it just appeared too small.  James, convinced that the drawing of the Hurricane was correct reached for a steel rule to check the measurements.  Sure enough, the fighter was spot on and that was when the penny dropped, it must be the Storch.  Sure enough the scale was slightly out, not a huge disaster, but would now require some rescaling to bring it back in line.

This has been a wonderful diversion and I can't wait to get my hands on one of these kits, just need to persuade James not to reenact the 'Battle of Britain' in 1/56 scale!