What a load of Bullocks!

This post originally formed my entry to the second of the bonus rounds for the 'VIII Analogue Hobbies Painting Challenge'.  Rather amusingly titled, Big Freakin' Gun, this was one of those wonderful opportunities where the theme fell perfectly for the miniatures that I already had – well mostly!  I have always loved artillery on the table top, it just looks impressive and the Challenge has given me plenty of opportunities to indulge in this over the years, whether that be Russian Field Guns in the Crimea, the Naval Brigade seeing off the Mutiny or Māori Warriors with a captured Carronade.

Returning to the theme of BFG and I was instantly reminded of a piece of antiquated artillery from ‘Redoubt Miniatures’ Wellington in India range.  I had picked it up a couple of years ago with an idea that it could have been pressed into service during the Mutiny by a particularly brave, but desperate group of mutineers; I mean, just look at it!  I loved the chunky, solid wooden wheels of the bullock cart and the sheer improbability of the piece and decided that this was perfect for the round.  The difficulties started when it came to crewing the beastie.  I had some ‘Mutineer Miniatures’ Irregular Indian artillery crew that looked suitable and based them on card whilst I scratched around for an idea as to how to bring everything together.

I believe it was at this point in the project that I fell afoul of what they call mission creep!  You see, I also remembered that I had picked up an ‘Indus Miniatures’ (available through Wargames Emporium) Indian artillery piece, resplendent with its lion’s head muzzle ornamentation and what could be better than a BFG?  Well two BFGs of course!  The Indus piece was bought for exactly the same purpose as the Redoubt one, it just looked so cool!  I now had two guns and one crew, what to do?  In the end I decided that the Indus piece looked ready for firing and so would have the crew whilst the Redoubt piece needed some form of assistance in transportation. 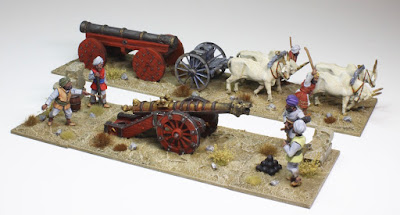 A bullock cart needs bullocks and lo and behold the new ‘Iron Duke Miniatures’ range (available through Empress Miniatures) have a set of bullocks along with a couple of nicely sculpted Indian drivers.  So with bullocks in hand* and a bit of careful matching on the base widths, I was able to create a series of units that could, in theory, be interchanged.
*not an expression to say out loud in polite company. 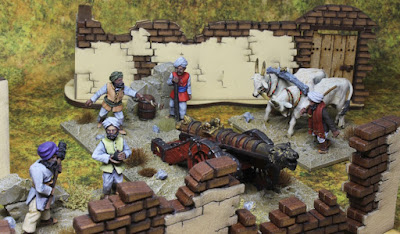 Although pleased with my efforts. something wasn’t quite right, I needed a limber!  Back on to ‘Empress Miniatures’ and the missing item was ordered up, and what a fabulous piece of casting it was too.  The only down side was that I had already positioned the yoke spars on the original bullocks and didn’t have the heart to remove them so, for the time being, it will have to suffice until I am brave enough to do it properly. 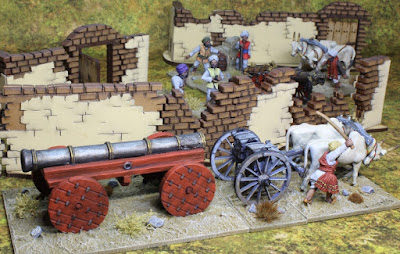 Purely as an aside the ruined walls and doors are from ‘4Ground’ and purchased as a set in one of the ‘North Star Military Figures’ clearance sales.  They are very cleverly done as for what appears like random damaged brickwork can actually be slotted together in a number of different ways giving variety to your terrain building.  (16 pieces in total)