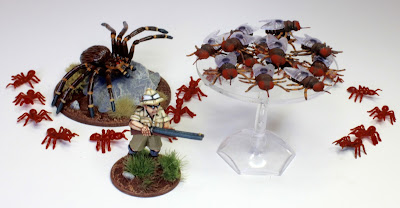 I had enjoyed the humour that had crept into the creation of the ‘totems and tokens and traps’ and very much wanted to continue in this vein when looking for suitable models to represent the creepy crawlies that inhabit the jungles of the Congo. A visit to the local Poundland unearthed a wonderful pack of joke bugs for, well a £ naturally, and the first to be used was the large plastic spider. It was given a quick paint job and added to a themed base, but on reflection, I wonder if I should have used some sort of web effect! 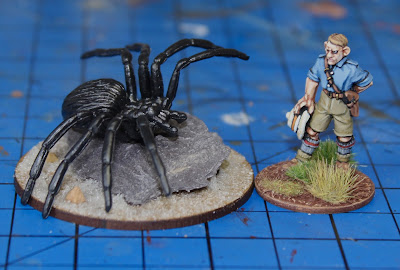 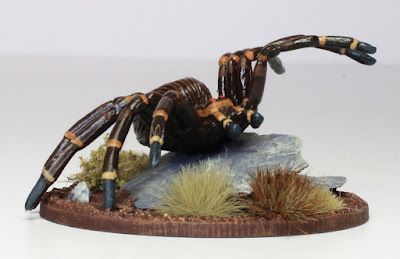 The ants came in variety of colours, but I wanted mine to be fiery red and set about spraying them with the airbrush before adding a little sepia wash to bring out the different segments of the body.  Of course every self respecting ant needs a hill to protect and before long I was ordering up some of the ‘Warlord Games’ termite mounds that were originally created as part of the Sci-Fi game, Beyond the Gates of Antares. 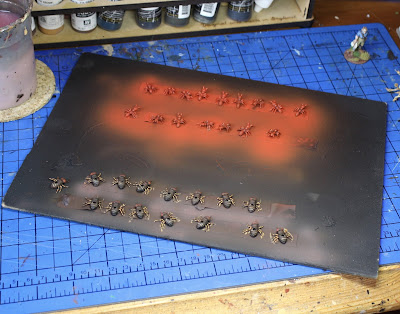 I had seen these on Lee Brady’s splendid weblog, ‘Harold’s Revenge’ and they proved just too tempting to resist.  Although perfect for the job and very easy to paint, I have to say I was a little disappointed when I finally got them in my hand; they felt a little rushed with the sculptor’s fingerprints still actually visible.  They certainly saved me some time, but again, I wonder if the same effect could have been achieved with some Milliput and a couple of MDF disks? 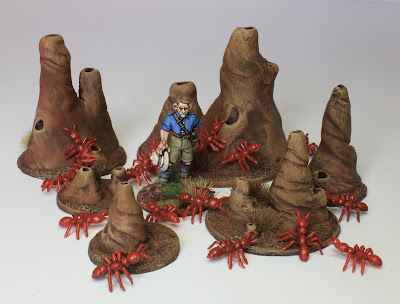 Finally, then the infamous Tsetse fly.  Young Master Awdry would often be found with his nose in an encyclopaedia greedily absorbing facts and figures and marvelling at pictures of animals from the far flung corners of the world.   Strangely the blood sucking carrier of sleeping sickness*, the Tsetse fly would always send a shiver down my spine, the thought of something so small having such a devastating effect clearly upset me. 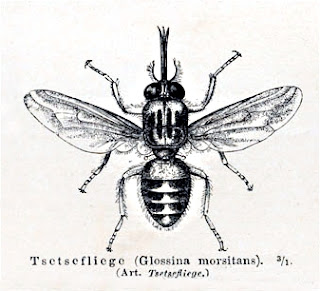 *African trypanosomiasis
Looking at the remnants of my Poundland buy, I felt that the handful of houseflies that remained just didn’t look menacing enough, a drastic plan was called for!  In a feverish bout of madness, akin to a Victorian Lepidopterist or brattish schoolboy, I started to remove the clear plastic wings from the flies.  In a bid to represent the forward projecting, piercing, proboscis on the head, I drilled each one and inserted a small length of fuse wire. 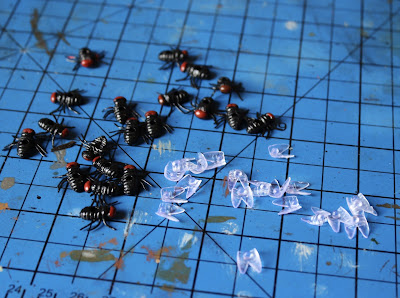 Now attached by double sided tape, I sprayed them a base colour before adding a few details, here and there.  The wings were then carefully replaced and a dollop of fresh ‘blood’ added. 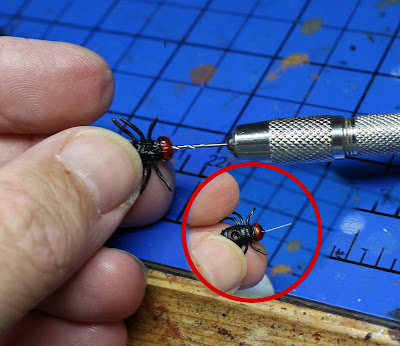 In a bid to try and create a swarm effect, I stuck the individual beasties to a clear Perspex disk and attached a flight stand so they could swarm, annoyingly, at head height.  I always enjoy projects like this, where you just let your imagination run riot.  A hugely entertaining and rewarding process. 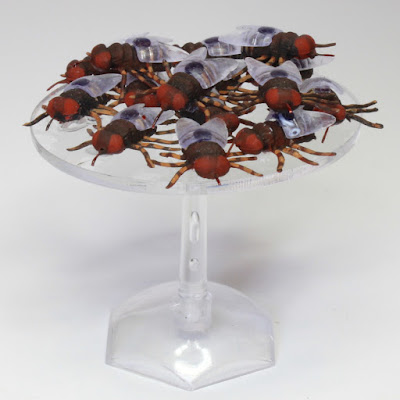