There can be only one! 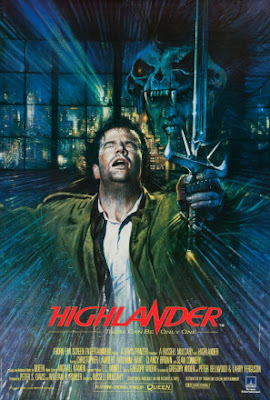 From the dawn of time we came; moving silently down through the centuries, living many secret lives, struggling to reach the time of the Gathering; when the few who remain will battle to the last. No one has ever known we were among you... until now.

Much maligned and often derided the 1980s have been enjoying something of a revival of late, as only the other day the 'Saintly Mrs. Awdry' took in a concert performed by her teen idol, Nik Kershaw Esq.  Certainly, from my point of view, they were a decade of scintillating highs and desperate lows as witnessed through the eyes of an adolescent schoolboy.  That said solace was often found through the escapism of the cinema or the renting of videos* and one particular title that has endeared a place in my heart, and dare I say earned cult status on a global scale, was Russell Mulcahy's 1986, Highlander.

*Even this was a potential minefield of disappointment given the myriad of truly appalling 'straight to video' releases of the time. 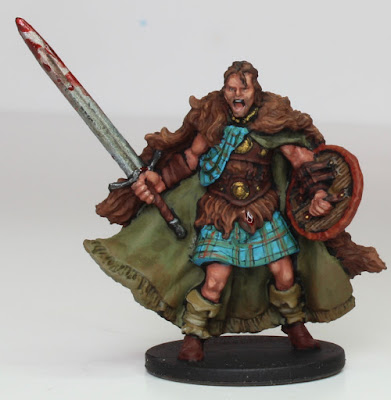 From Sean Connery's opening narration as Ramirez, I was hooked.  Add to this a heady mix of battle scenes, time travel, a love story and a thumping soundtrack from Queen and, as far as this sixteen year old was concerned, you have cinematic gold!  Now I am happy to concede that it is floored, but Christopher Lambert's dire Scottish accent not withstanding I still very much enjoy it, probably in a similar way that a toddler still craves a baby blanket, yes Highlander has become a 'thumb sucker' of a film, you know you should let it go, but something won't let you. 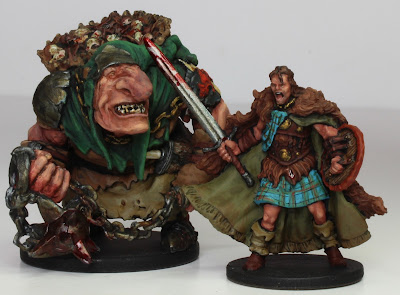 Anyway, I digress, but there is a relevance buried here, I promise.  In preparation for Saturday's 'Gathering' I felt the need to paint a couple of Zombicicde Black Plague Survivors to bring to the table.  Having already completed the plastic mountain of an Ogre that is 'Klom', I was looking for something a bit different.  'Bullcher Feb' has already identified a couple of candidates that he would like to add to the mix, namely 'Redcap Rodney' and 'Nelly the Barmaid' and so I went in search of inspiration of my own.  I have been quite taken of late by my good friend, Stefan's** work, particularly his 'Bother James' and 'Xuxa'.  Now of course any resemblance to cinematic characters is purely coincidental, but I think we all love the 'not' characters best and I was delighted when my eyes fell upon a potential Connor MacLeod. 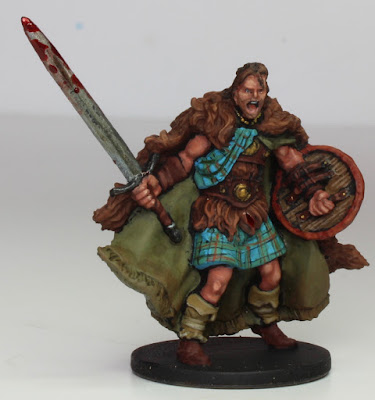 Having selected Gowan, to give him his official name, I quickly checked the official blurb, which read as follows.  Gowan was born in a filthy hut, lived in a filthy hut, and nearly died there when the zombies attacked. He was the only man of his village to survive their vicious, mindless attack, and, when the dust had settled, he took a sword off of a dead soldier and went about killing his former friends and kin a second time as they rose as zombies. He has been wandering the land ever since, looking for a place to call home. But everywhere he goes, death seems to follow behind. 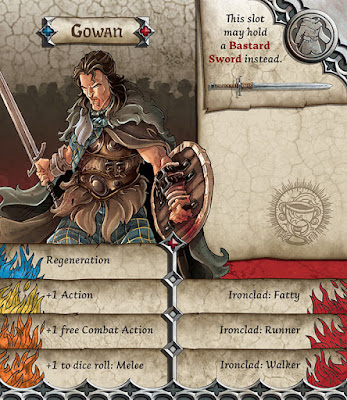 With a nod to his cinematic lineage, Gowan is gifted Regeneration as a starting skill, meaning that at the end of each game round, all wounds that he received are removed.   In my eyes this would make him a good character to take on that risky search at the end of his go or a character that could buy the rest of the group some time at the start of the game as they look to 'tool up' for the battles ahead.  Of course there are limits and Gowan will need to be careful not to be bitten three times in one turn as Regeneration doesn’t work if the Survivor has been eliminated. 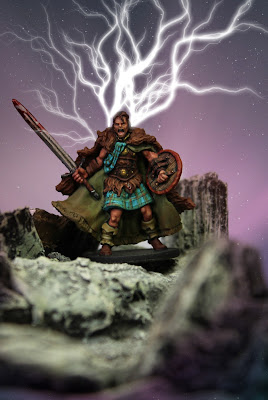 Painting was relatively straight forward until it came to the tartan.  Now I can tell you that there is, of course, a MacLeod tartan, but it doesn't look anything like this!  I had meticulously planned my approach trying out paints and intended on using inks mixed with my chosen colours to make the lines easier to control.  This had all worked splendidly on paper, but when I tried it on the miniature it all went wrong.  The consistency of the paint just wouldn't adhere to the plastic and I had to resort to plan 'B'.  Although far too bright, with a couple of washes I have rather come to accept my new colour scheme as it adds some much needed vibrancy to the piece and I feel impact is important, after all in the words of the Kurgan himself,

"It's better to burn out than to fade away!'