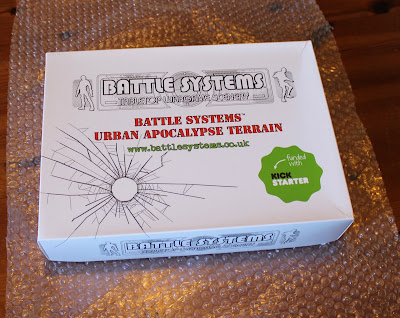 It is perhaps not surprising that at this time of year the day job demands much of my attention.  The publication of the A-Level results last week meant that hobby time, and Blogging, had to take a bit of a back seat of late, but I haven't been completely idle.  Earlier in the week my pledge for the 'Battle Systems' Urban Apocalypse Terrain Kickstarter arrived; I had heard whisper that it was landing on doormats across Europe and now I had my hands on mine. 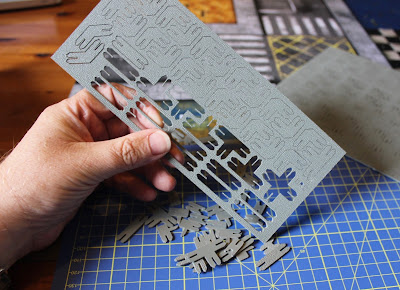 I had already seen a couple of unpacking videos and watched some of the assembly tutorials on the company's website, but when I had the actual product in front of me I was so excited that I just didn't know where to start.  I think the hesitancy was initially caused by being too precious about the individual parts and if I could offer some words of advice, don't be.  Of course care is required as the card stock, whilst of a fabulous quality, does have delicate parts and sometimes the interlocking grooves or tabs might be too small or thin,* just cut them to fit and move on.  The thing I had to remind myself was that I had bought this as playable terrain for games like 'The Walking Dead, Mars Attacks, ZombieTV and the Batman Miniatures Game, it was not going to be for display purposes.  It was backed for the very reason that it could be assembled, played with and packed away again without incurring the wrath of the 'Saintly Mrs. Awdry'.
*although it has to be said that this is rarely the case. 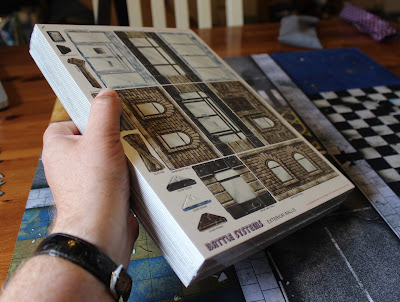 Resolute in my determination to actually assemble something before the Lady of the house returned, I ploughed on regardless and started pressing out the plastic clips that are instrumental in the construction of the various levels.  This was followed by some sheets of the card stock, and again I need to point out the sheer quality of the printing.  Those familiar with the quality of the Zombicide boards will not be disappointed at the design and printing of the different textures that 'Battle Systems' have employed.  Exterior and internal walls aside there is a plethora of different furniture pieces and scatter terrain squeezed on to each sheet and because of this hours seemed to slip by before I had achieved very much at all. 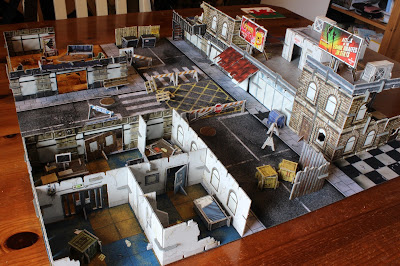 Having assembled a couple of things and placed them on the superb, rubber backed neoprene mat, again beautifully printed, She, who must be obeyed returned and all had to packed away so I could lay the table for supper.  Given the lightweight nature of the terrain, I simply picked up two opposite corners of the mat and took the whole street off the table, resigned to the fact that I could have another go at town planning the following day.  I am happy to report that the second attempt was much quicker as not requiring to push out the individual items I was able to give more thought to what I wanted to construct and in no time at all things were coming together. 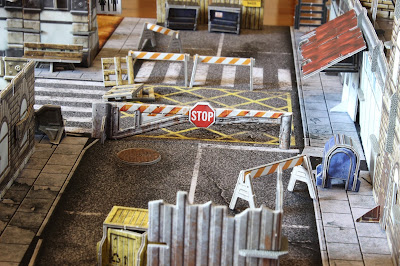 Whilst some of the individual pieces of furniture have just one purpose and can therefore remain assembled the bulk of the terrain is completely interchangeable and so you really are only limited by your imagination and the amount of clips you have.  Pleased with my initial attempt at town planning it was time to unleash the horde onto the streets to see how it looked and I have to tell you I was thrilled with the outcome!  The quality of the design and the actual product really are amazing.  The photographs that I have taken just show the 'raw' card stock straight from the box and before even considering edging with a felt pen or graphic marker. 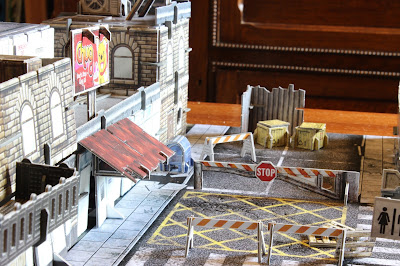 The terrain allows you to use both interior and exterior playing surfaces, but you will need to give this some thought before putting your town together.  You should simply just be able to lift a floor or roof off to gain access to the interior space below, and in theory you can, but some of my initial designs meant that when lifting the floor out I kept catching it on the clips supporting the other walls. This often resulted in showering the streets below with all manner of debris and accompanied by the occasional harsh word.  This is a minor moan and one I took pains to avoid in revised builds by simplifying those areas I wanted to remove.  So really, really pleased with this and I hope that it will get some use in the months to come, well done 'Battle Systems';  now on with the photographs! 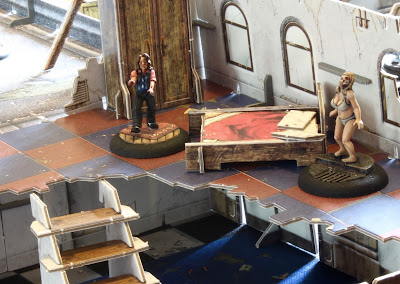 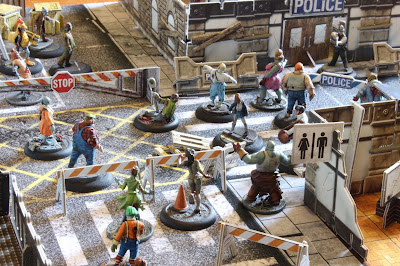 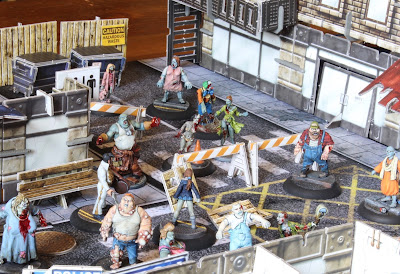 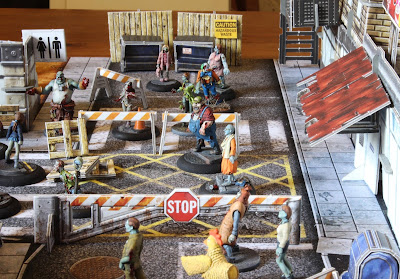 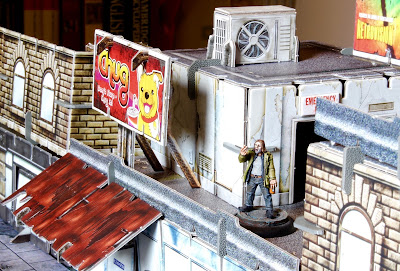 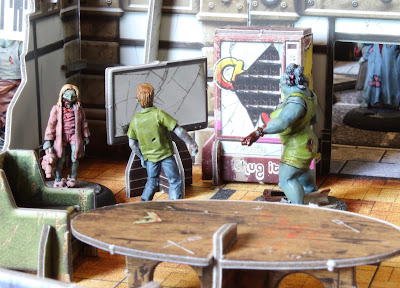 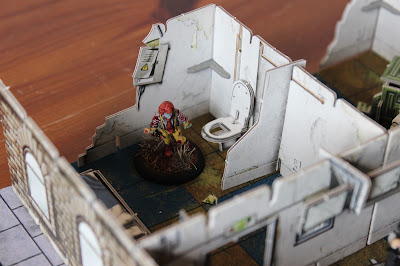 Email ThisBlogThis!Share to TwitterShare to FacebookShare to Pinterest
Labels: Terrain and Scenics, Zombies