Where have all the villains gone? 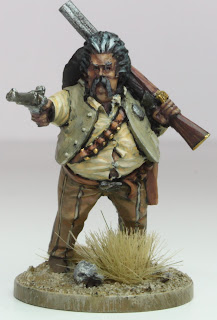 The '4th Analogue Hobbies Painting Challenge' is now well underway and the second of the themed bonus rounds called for a villain or villains to be painted in order to bag the additional points on offer.  Given that I have managed to embroil myself in a friendly side challenge with Phil and Greg to see who can amass the most points painting 'Victorian' miniatures, I clearly looked to this era first - perhaps a Moriarty, Fagin or even the nefarious Jack the Ripper himself. 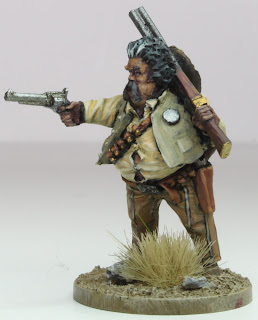 Now having pledged that one would try to curb the expenditure on miniatures this year, or at least try to bring it into line with output*, I was left scrabbling around the lead pile when it suddenly dawned on me that I had just the very thing - these Victorian splendid Mexican bandits and Deputy Sheriff! 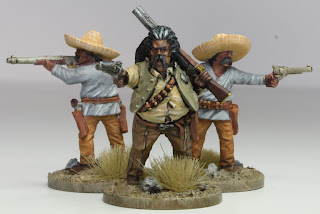 All from 'Black Scorpion', they seemed to fit the bill perfectly; the Mexicans miniatures were, in fact a give away prize from that most excellent of Bloggers, the 'Laughing Ferret' and were already prepped and primed in white.  I did rebase and pin them so that they fitted more closely with the rest of the characters from the 'secret project'.** 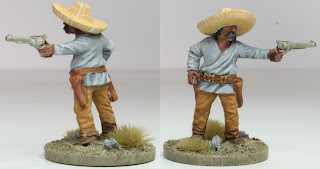 This was the first time that I have painted any miniatures with a white undercoat and on reflection, I still have mixed feelings about them; I enjoyed the way the colours seemed brighter and had more impact, but having become so reliant on a black undercoat to disguise any mistakes, I felt a little 'exposed' with these.  Sure enough I resorted to type with the sheriff, a resin miniature that was lovingly given my more favoured black undercoat! 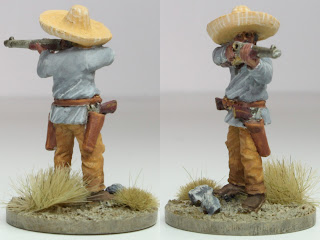 Having assembled the requisite miniatures, I now needed to be clear as to their villainous context, after all we wouldn't want anyone accusing us of any point grabbing shenanigans!  So it was that I stumbled upon my muse, the gentlemen and scholar that is, Raymond Rousell Esq.  Ray has, of late, been the butt of some remorseless ridicule due, in part, to his own efforts to achieve the best possible score he is capable of in previous painting competitions.  (I understand that the term  'Sandbagging' - to deliberately underperform in a race or competition to gain an unfair advantage, is now more in use in the English language that at any other time since its creation!) 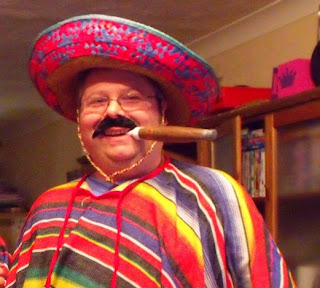 Ray, is of course, a fine upstanding pillar of the community, but like a good many of us, prone to making the odd misguided decision or two, take for example this illustration of sartorial elegance!  Yes dear reader it was this photograph that helped me create the legend that is - El Tejón!

Still curious as to the name?  Perhaps the hair colouring will give you a clue! 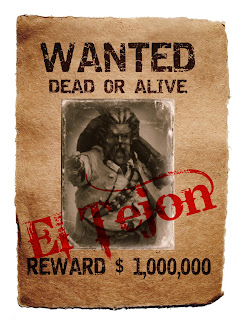 El Tejón, a self appointed maker of laws in the town of Moriarty, New Mexico*** was respected and feared in equal measure.  This villainous being has amassed a vast fortune by collecting protection money from the vulnerable townsfolk.  It is said that El Tejón would offer bags of sand in exchange for wealth, offering a scant physical defence from the marauding bandits; bandits that he in fact controlled! 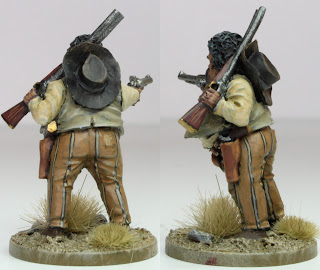 *Guilt is a terrible thing!
**Something else that I need to resurrect!
***I kid you not, look it up in an atlas; I knew there was a Victorian link!