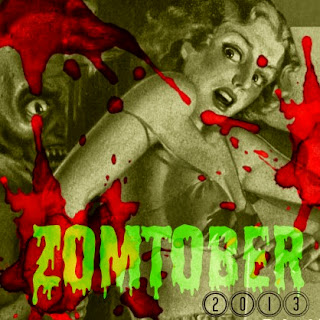 Although the Zed filled event that was 'Zomtober 2013' has officially come to an end, it seemed churlish not to squeeze in one more zombie related post to mark 'All Hallows' Eve', especially when you consider my choice of miniatures for the post. 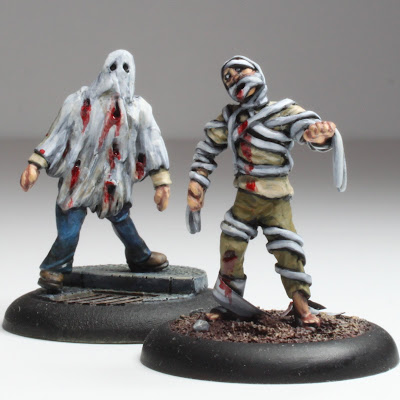 These two are from 'Grekwood Miniatures', which have a wonderfully entertaining range of Zombies that just love to dress up!  I had hoped to get all four of the costumed cadavers that I'd ordered done for the day, but sadly 'stuff' conspired to reduce my tally by half.

That said, I couldn't resist just a little conversion to the chap in the'Mummy' costume by adding a trailing bandage, fashioned from a strip of masking tape; in addition the 'Ghost' was pinned to a rather splendid 'Fenris Games' base to tie in with my other shufflers.

I have to say that they were a delight to work on, requiring only the minimal of cleaning up; this coupled with outstanding customer service means that I will no doubt be back to pick up some more before too long. 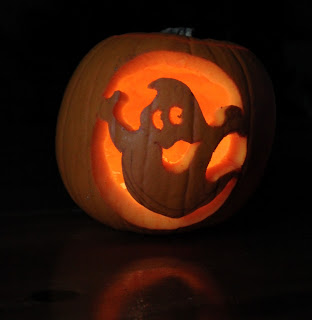 So once again Halloween sees yours truly wrist deep in pumpkin flesh as I try to fashion something 'spooky' on the front of the 'Saintly Mrs Awdry's' squash (see above for this year's effort) in readiness for tonight's ceaseless door knocking by the ferrel children of the village.   That said, my willingness to embrace this tradition, so highly regarded by our American brethren, is a small price to pay if it means I can smuggle chocolate 'contraband' into Awdry Towers -