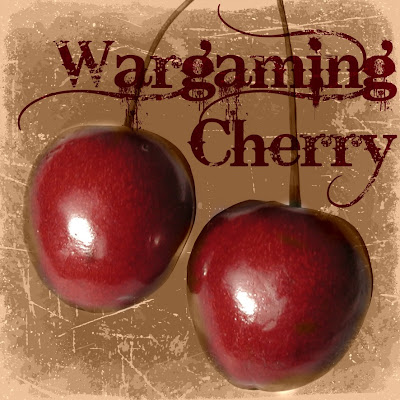 The skies darkened as the rain tore at the already saturated earth; there is never a good day to die in this godforsaken place thought Marcus, the weight of his scutum now starting to tell.  He glanced at the three remaining members of his patrol, how many more would he lose?  Gripping the pommel of his gladius with renewed determination, Marcus offered up a silent prayer to the Gods that today would not be their last - welcome to the world of the 'Dark Crucible'.  Fortunately for me, Mike 'The Dark Templar' Reynolds wasn't deterred by the weather as he battled with torrential rain to reach 'Awdry Towers' on Saturday morning, his mission - to get this reluctant wargamer a game or two under his belt.  I’m sure many of you will have read Mike’s post regarding his recently revealed ‘secret project’ – The Dark Crucible, a set of skirmish rules combining historical and fantasy elements, well today was going to be my first encounter. 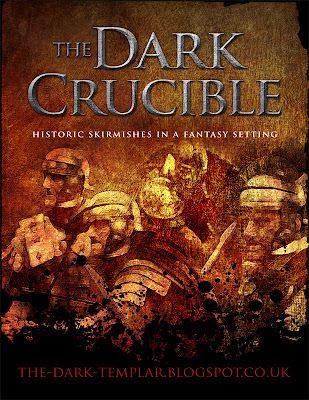 Now before I go much further I need to admit to the heinous crime of not recording the event photographically – so excited was I at actually playing a game that it completely slipped my mind; as a result I’ll endeavour to keep this report brief!  I was playing the Celts, which gained me two extra characters to compensate for the Romans superior armour.  I should also point out that we were playing the most basic version of the rules so as not to completely lose me, that said I found them quite intuitive and before long felt comfortable with the format.  The scenario was ‘Last Man Standing’ and after rolling for initiative each character is activated in turn and has two actions to perform.  As we were using my still to be completed coffee table board is wasn’t long before the two factions were locked in mortal combat as I was started to rue my decision for not going for the more heavily armoured troops!  The speed of the game and small amount of miniatures on the board meant totally immersion was inevitable, with gentle banter being the order of the day.  In the end it was the Celts’ speed that was to win the day, preventing the Legionnaires from forming an impenetrable shield wall – much to my relief!  Although we only scratched the service of the game, I have to confess that I was hooked and have already started tinkering around with unit lists and sourcing possible miniatures so as to have my own war band for any possible future encounters – yes, yet another distraction! 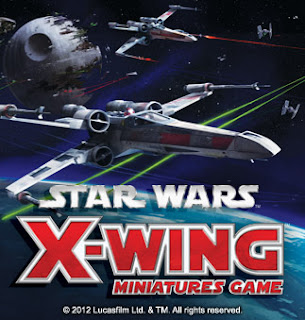 After a brief pause for a bacon butty or two and the obligatory debrief it was time to embark on the afternoon’s gaming – ‘Star Wars X-Wing’.  I am a huge fan of all things Star Wars and Mike had picked up on the fact that I was desperate to have a go at this game, so you can imagine my delight as he began to unpack the wonderfully detailed miniatures.  I’ve read so much about this game on other erstwhile weblogs and was curious to see if it could live up to my expectations, but I can honestly say that I was not disappointed.  We played a couple of quick and simplified games that saw Luke Skywalker blasted from the skies in the first and then the Rebel Alliance exact their revenge on Darth Vader in the second.   Oh yes this was definitely for me, I've ordered up a starter box of my very own this morning!   I can’t thank Mike enough for his patience and willingness to travel down and show me just how much fun gaming could be.  Finally, then, the gaming cherry has been popped, what happens next though is anybody's guess!