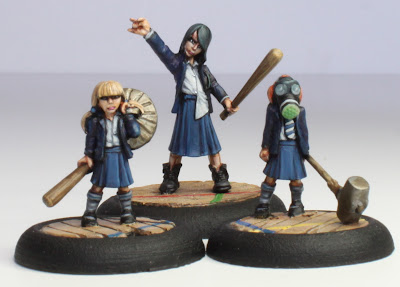 Introducing the all but feral members of my St. Trinians' 'Fourth Form'!  The cast list for my planned '7ombieTV' episode calls for the inclusion of at least one member of the lower school and these fabulous additions from 'Hasslefree Miniatures' seemed to fit the bill perfectly.

'Hasslefree's' Katie needed little conversion, other than pinning her to the chosen base, and seemed to fit the description of these unstoppable urchins perfectly armed, as she is, with a rounders bat and dustbin lid shield.  Rose, however was to pose another question.

This wonderfully bizarre, gas mask wearing miniature is so tiny, but lacks little with regards to the quality of the sculpting and detail - that Kev White is a very talented chap!  What she did lack, however was any form of armament and I was really worried about setting about her with my scalpel, what to do? In the end I went for a totally improbable sledgehammer, the ridiculousness of the weapon in comparison to the fragile frame seemed to fit with my interpretation of the rule set. 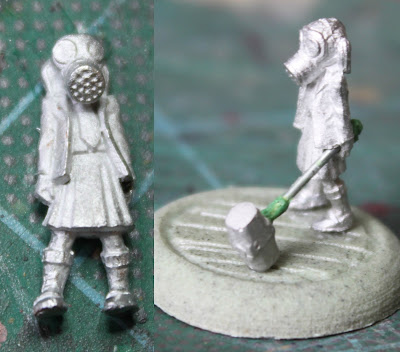 Using my smallest drill bit and a paperclip, Rose was 'tooled up' with an off cut from another miniature - more of which later.

The final miniature, another fine 'Hasslefree' sculpt, is the rock chick, Alyx, perhaps not as comfortable a fit for the 'Fourth Form' stereotype she does rather match the cast list details for 'Violent' Elizabeth.  To quote directly from my copy of 'Crooked Dice's' For Ghouls and Colleges supplement:

This precocious horror was destined for stardom before the outbreak cut short a promising career on stage and film. This loss has left the poor love in a terrible state, but she is able to focus her rage and formidable set of lungs to provide an excellent early warning system for the school. Elizabeth has developed an odd fondness for the feral Fourth Formers, and they seem to allow her to lead them.

Matching the blues of the uniforms and continuing with the gymnasium themed basing the girls are stating to form a formidable looking unit - even if I do say so myself, but what next?  Well there are some more 'Sixth Formers' in the queue, but more pressingly is the need for some terrain pieces including trees, barricades and even the school bus!  All of which I hope to complete of the next month and a half. 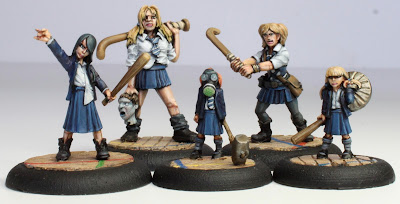 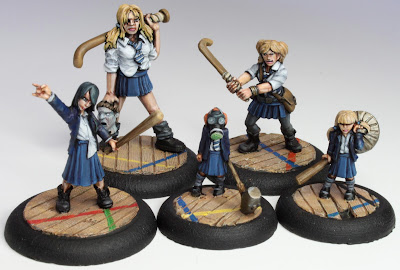 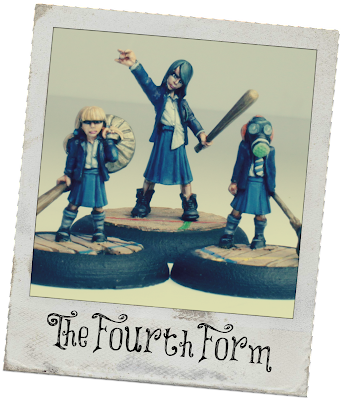