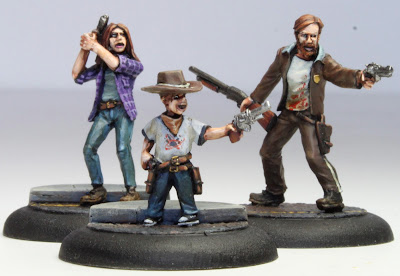 It is funny how the smallest thing can spark a series of thoughts that can lead to a subtle change of direction - sometimes there is nothing subtle about it at all!  Just the other day, I received an email from the good people at Amazon to notify me that 'The Walking Dead' series 3 was available for pre-order. 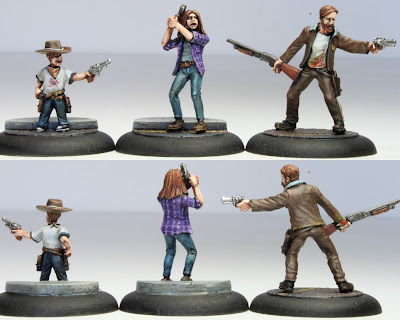 Now I was very late on this show and had only finished watching my box set of series 2 whilst series 3 was already underway here in old Blighty.  Having decided not to rush you can imagine my excitement at hearing news that more celluloid cadavers were heading my way - this called for a celebration!

And so it was the 'Rich and Family' (as 'Studio Miniatures' have surreptitiously named them) saw themselves promoted through the massed ranks of the painting queue.  I have managed to convince myself that these, and the set that will follow shortly, are only the smallest of distractions as they do at least pertain to the zombie apocalypse!

As with my previous experiences with 'Studio Miniatures' they were great fun to paint, although the 'not Carl Grimes' was a touch problematic given his stature and my fixation with trying to replicate the Atomic Paw logo on his T-shirt!

In fact it soon became a bit of a mission to base all three on America's number one, post zombie apocalypse family - I such a sucker for a television or movie tie-in!  Roll on September when I can finally get my hands on series 3 - now no spoilers please!