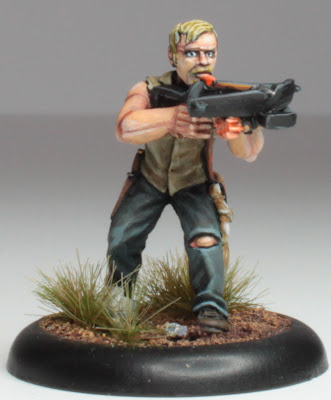 I have very little ‘must watch’ television scheduled into my daily life, but every once in a while a series will capture my imagination and The Walking Dead, an American horror television drama series  spawned from a comic book series of the same name, is certainly one of those.  The series has had many awards lavished upon it, but for me its strength is its character driven storyline and the relationships and group dynamics that are forged by the survivors as their fate unfolds. 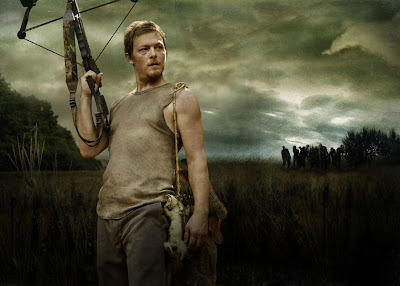 Not surprising then that some of the characters have become immortalised in lead and this wonderful two part character piece comes from 'Studio Miniatures'.  Daryl Dixon has to be one of my favourite characters from the immensely watchable ‘Walking Dead’ and this wonderfully detailed sculpt was a joy to paint up, albeit in a rather predictable palette; the fun being picking out items like the squirrel, Bowie knife and necklace of ears!

Although a relatively new devotee to this tale of life after the zombie apocalypse it strikes me as a tad ironic that Daryl is one of the few people who actually finds himself with more friends since the dead stared walking!  A loner by choice who can deny the importance of a crossbow wielding, 'good ol’ boy' on your side when trying to stay one shambling step in front of the walkers.