Something For The Pot... 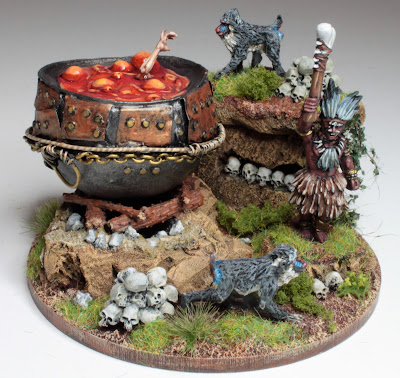 Still flushed with my success in scooping the 'Challengers' Choice' award in the '3rd Annual Analogue Hobbies Painting Challenge' it suddenly occurred to me that I haven't actually posted the work in progress shots that I took as the project developed.

The cannibals themselves had been an impulse purchase having recently finished reading Robert Edric's, 'The Book of the Heathen'.  Hugely entertaining to do they had received some favourable feedback including one seemingly throw away comment from Dave D of 'One man and his brushes' who wrote,

Rather fine - they are stunners Michael.  Now where is the big cooking pot? - you could use blinky lights as the fire, and then you would need water for the pot- come on you know you want too.. :-)

Well that was it, the seed was sown and when shortly after that a pair of blinky lights arrived in the post from Dave, I knew I was doomed.  Having squirrelled together some other bits and pieces including  Games Workshop skulls, some more North Star Miniatures Cannibals and baboons (I had recently read their on line article about converting them to Mandrills) I promptly hit a snag and the whole project got mothballed.  When the challenge came around it was Dave again that pointed out that there were other non military categories available and the whole project rose phoenix like from the yet to be lit ashes. 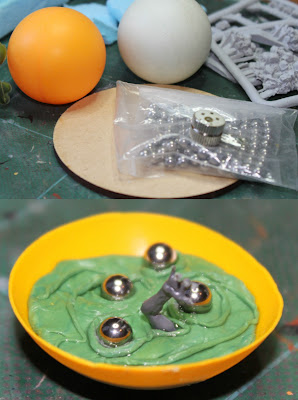 The problem that had stalled the project the first time around still needed to be resolved though - what to use for the pot?  I had considered all manner of items including doll's house furniture and various tops from plastic bottles, but nothing seemed to come close to what I imagined in my minds eye - pulp, yet robustly built.  In the end it was a humble table tennis ball that came to my rescue, the top third cut and inverted to give the impression of depth without having to resort to filling the whole thing with stew!  Greenstuff, ball bearings, beads and a plastic zombie's arm became the dish of the day and the project was well and truly back under steam. 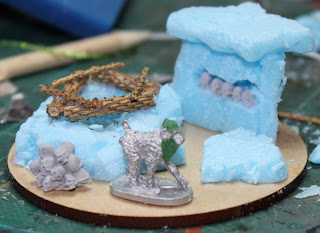 I knew I had to build a space to hide the blinky and from that came the idea of a separate platform, with a shelf of skulls, a macabre trophy cabinet.  I had envisaged the 'chef' overseeing proceedings from here, but was running the risk of the the whole project towering out of control and becoming too vertical in its build so instead opted for the Mandrill guardians to be patrolling the higher areas. 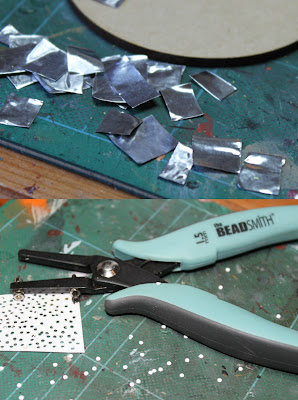 I imagined this pot to have been in use for some time, becoming an old favourite that couldn't be thrown away, patched and made good as the need arose.  With this in mind I cut up strips of foil and glued in a haphazard manner, but be careful with what glue you use or you could find your balls shrivelling in front of your eyes - something to be avoided at all costs!  As for rivets, I invested in a mini hole punch which was perfect for punching through sheets of plastic card, plenty more projects for this in the future. 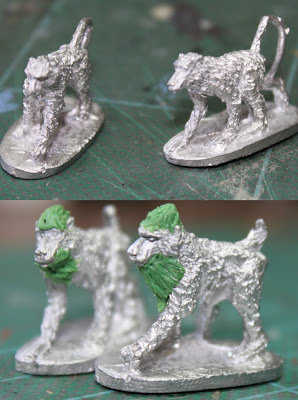 With a few snips and judicious placement of some greenstuff a couple of humble baboons become the mysterious and vicious guardians of the pot.  All that remained was a liberal spreading of pumice gel, a few small stones and some chain and the build was complete, just the painting then! 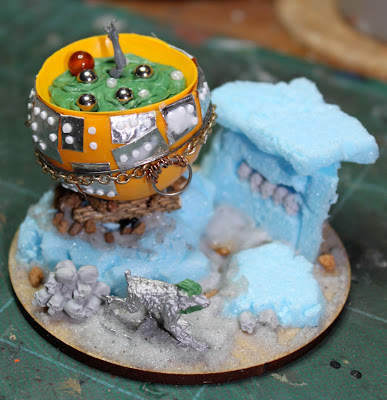 The painting was actually fairly straightforward with many of the lessons learnt from 'A Tale 3 Painters' and the use of metallics, matt medium and glazes all revisited to good effect.  The soup, once painted, was covered in Vallejo's 'Still Water' medium just to really sell the illusion; tufts, static grass and vines all helped to complete the project. 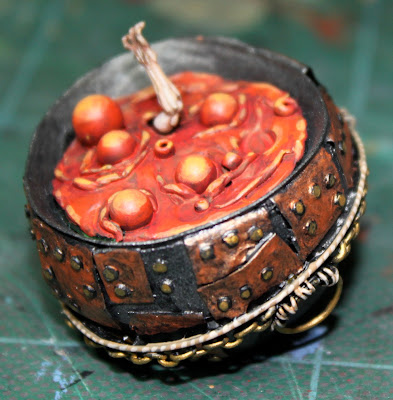 That, as they say, was that; a hugely entertaining modelling and painting project and one that had started off as little more that comment on a post.  It is these impulse projects that are often the most rewarding and this was no exception, but where next?

Finally I've managed to take some decent photographs showing off the blinky to its full effect. 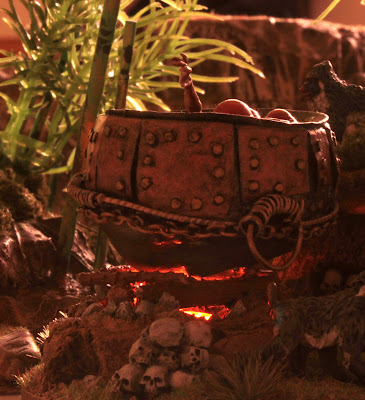 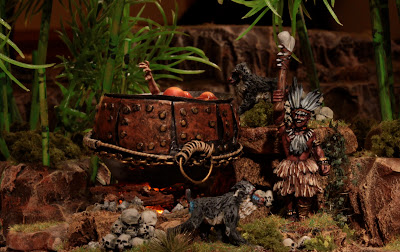