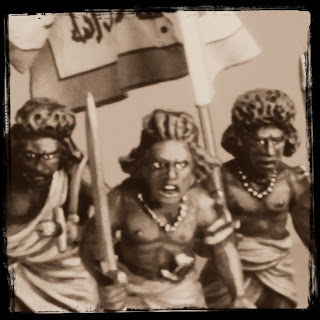 December is upon us and the Christmas decorations have been dusted off and once again hoisted up to the title banner of '28mm Victorian Warfare'; all very festive indeed.  With three Sudan based posts and some form of game to play before the end of the year, it certainly promises to be a busy month!   So without any thought to my sanity, I decided that it was time to tackle my first box of Perry plastics!  Armed with side cutters, scalpel and a stiff upper lip - and trying desperately to recall the advice imparted by Dave Docherty of 'One Man and his brushes' fame - I sallied forth. 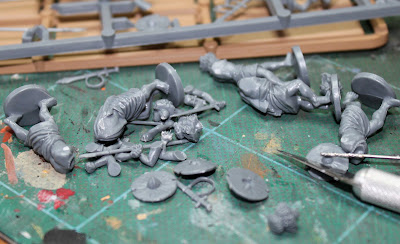 Within minutes the the work station was utter carnage!  There were dismembered bodies, blood and bad language in plentiful supply as body parts dived for cover in the seemingly impenetrable dining room carpet; spears snapped at the most awkward of places and don't get me started on shoulder slung scabbards and all the while I was thinking of Dave's advice, "a dab of glue to help 'melt' the pieces together."  Melt! Are you sure?  I was going to all this trouble to have them melt!  I was starting to think that my first batch of Beja tribesman were going to look more like the Toxic Avenger! 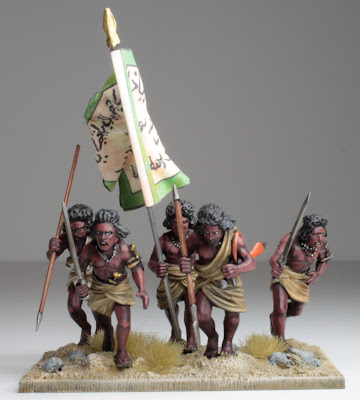 I need not have worried,  a few calming breaths and a slug of Earl Grey and things were looking decidedly brighter.  All the composite parts were washed and dried and suddenly it all came together rather well (in my humble opinion anyway) and once they were undercoated, I really was rather impressed at how characterful the sculpts actually were. 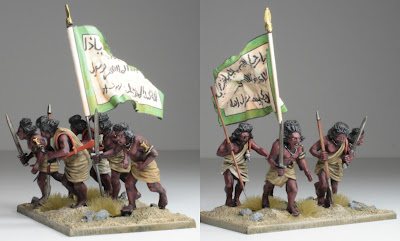 Painted to represent the Beja of Kipling fame, all that remained was basing and that final touch, again supplied by Dave, a 'Flag Dude' standard and they were complete!  I was going to squirrel the remaining sprues away in favour for more esoteric shininess, but given that I have gone and thrown my hat into the ring to take part in Curt's '3rd Annual Analogue Hobbies Painting Challenge' they may yet get a reprieve as I look to tidy up the edges of the decidedly unstable lead pile! 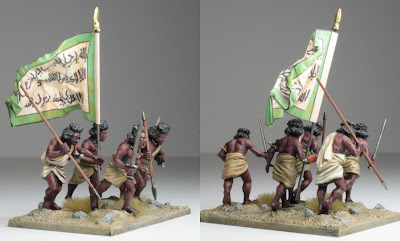 WE'VE FOUGHT with many men acrost the seas,
An' some of 'em was brave an' some was not:
The Paythan an' the Zulu an' Burmese;
But the Fuzzy was the finest o' the lot.
We never got a ha'porth's change of 'im:
'E squatted in the scrub an' 'ocked our 'orses,
'E cut our sentries up at Suakim,
An' 'e played the cat an' banjo with our forces.

So 'ere's to you, Fuzzy-Wuzzy, at your 'ome in the Soudan;
You're a pore benighted 'eathen but a first-class fightin' man;
We gives you your certificate, an' if you want it signed
We'll come an' 'ave a romp with you whenever you're inclined.

We took our chanst among the Khyber 'ills,
The Boers knocked us silly at a mile,
The Burman give us Irriwaddy chills,
An' a Zulu impi dished us up in style:
But all we ever got from such as they
Was pop to what the Fuzzy made us swaller;
We 'eld our bloomin' own, the papers say,
But man for man the Fuzzy knocked us 'oller.

Then 'ere's to you, Fuzzy-Wuzzy, an' the missis and the kid;
Our orders was to break you, an' of course we went an' did.
We sloshed you with Martinis, an' it wasn't 'ardly fair;
But for all the odds agin' you, Fuzzy-Wuz, you broke the square.

'E 'asn't got no papers of 'is own,
'E 'asn't got no medals nor rewards,
So we must certify the skill 'e's shown
In usin' of 'is long two-'anded swords:
When 'e's 'oppin' in an' out among the bush
With 'is coffin-'eaded shield an' shovel-spear,
An 'appy day with Fuzzy on the rush
Will last an 'ealthy Tommy for a year.

So 'ere's to you, Fuzzy-Wuzzy, an' your friends which are no more,
If we 'adn't lost some messmates we would 'elp you to deplore;
But give an' take's the gospel, an' we'll call the bargain fair,
For if you 'ave lost more than us, you crumpled up the square!