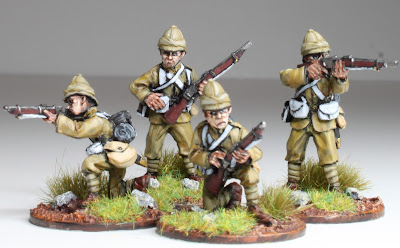 More from the Pontoonier range, distributed through 'Newline Designs'; plenty of detail to pick out, but similar issues with flash and cast lines.  Having worked out a suitable colour palette with the Command group the rest of this unit fell into line quite quickly. Thank you to all that ventured an opinion, regarding the 'strange' headgear in the previous post, Anglo-Burma War British Infantry Command, particularly Shayne (A.K.A. Carbine) who was the first to lead me to the Osprey Men at Arms 72 'North West Frontier', where it suggests that this hat was invented by a Henry Hart of Oxford Street, London and was made of straw with a cloth cover and had an internal headband which allowed all-round ventilation.  This was confirmed by Peter and the Mad Guru and again later when the 'Provost Marshal' kindly dropped round a copy so I could see the illustration for myself - all very strange, the hat not the 'Provost Marshal'!

This does of course present a small dilemma in so much as having convinced myself that this was a flaw in the casting process the gentlemen in question was dispatched to the dark side of the lead pile!  Even when located I shall be somewhat torn between painting him as the colour plate suggests or going with one of alternative suggestions such a partially-transformed victim of the jungle mushroom men or painting the helmet as a melon - decision, decisions!
Posted by Michael Awdry at 09:58