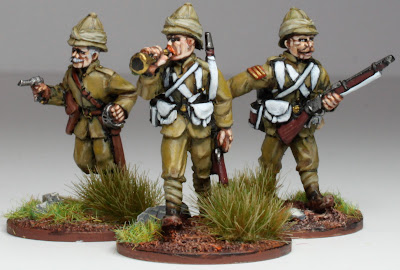 It wasn't until I received a virtual wake up call from Anne O'Leary, that I realised that I had once again fallen  into a painting malaise.  The rigours of the real world and getting back into some form of routine have all conspired to put pay to any form of progress.   So it was that with a sense of grim determination I dusted of the paintbrushes and set to work this weekend. 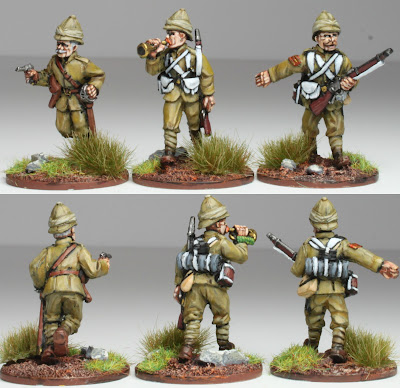 These dashing chaps were picked up at 'Salute' from the 'Newline Designs' stand.  They are part of the Pontoonier Miniatures range for the Anglo-Burma war of 1885, sculpted by the talented Mr. Paul Hicks.  They needed quite a bit of cleaning up and some of the finer detail was lost in the casting process and had become somewhat brittle - the officer's pistol actually snapped off and had to be replaced with a makeshift model!  All things considered they came up rather nicely and I have to confess that I'm delighted just to make some progress on the ever increasing paint queue.

Now whilst on the subject of miss-casts perhaps someone could shed some light on this peculiar headwear.  He was part of the same pack and try as I might, I can find no reference to any such helmet worn at the time.  So the question is, it for real or an aberration of the caster's art?