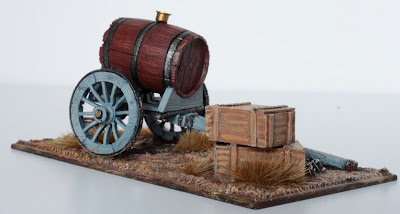 Buoyed with the enthusiasm of finally completing Otto Witt's carriage, this post sees another, long overdue, project completed.  I came across this idea on the Arcane and Model Scenery's blog where they created a water cart using composite parts from the 'Trent Miniatures', French Revolutionary Wars range.  The pieces in question were French Gribeauval Limber (£5.00) and the Large Wine or Sherry Casks (£6.50 for three)   and by following the really straightforward 'how to' they were promising a rather lovely water cart that I thought would be just perfect for dishing out a refreshing cup of 'Adam's Ale'  to sun parched members of her Britannic Majesty's Imperial Infantry. 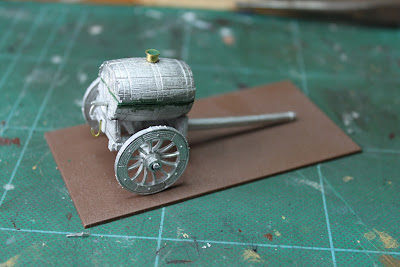 It really did go together rather well, a little bit of liquid greenstuff (a truly amazing modelling development!) made sure that any cracks were hidden.  The bucket hook was created exactly as described in the 'how to'  but the tap was actually made from the tiny off-cuts of flash after cleaning up individual miniatures - I really have started to horde everything!  The cork on the top actually came from an old retractable pencil's innards. 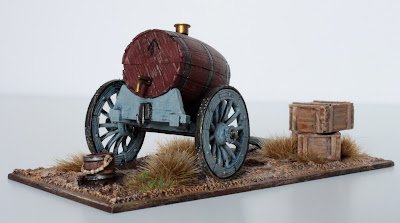 Painting was again relatively straightforward, having decided to go for a British Ordnance grey and a rather natural looking oak barrel.  That should have been it but decided to add a few little extras in the shape of some 'Ainsty Castings' crates and a couple of loose water canteens in a bid to make it a more prominent objective marker; I'm thinking,  'defend the water cart at all cost' type of scenario. 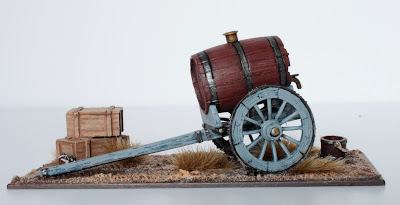 Just as an aside I notice that 'Warlord Games' have just released their water carrier from the 'Horns of the Buffalo' kit.   Sadly mine doesn't compare too favourably, as the sum of the parts came to £11.50, as opposed to the £8 charged by 'Warlord Games'.  That said I do have the added advantage of having an additional two large sherry casks with stands for a future project! 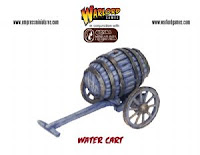