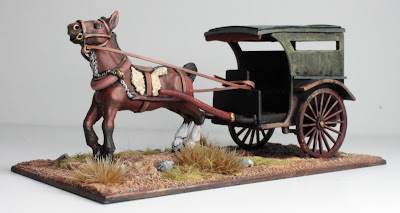 Finally another idea comes to fruition.  In all fairness this wasn't an original idea but inspired something similar on the sadly now seemingly inactive 'The Zulu War in Miniature'.  I have often seen other Lledo models transformed into great pieces and just fancied having ago myself.  The project started to gather a little momentum after the Rev. Witt conversion, but like most things simply fell by the wayside when something new and shiny appeared on the horizon! 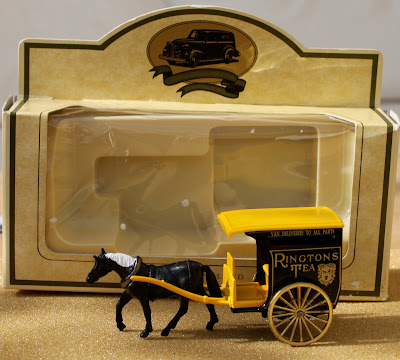 Having won my carriage on eBay for £1.99 was a great start, but the first observation was that the accompanying horse was a bit rubbish really!  I managed to track down a suitable replacement in a cart mule from 'Redoubt Enterprises' that you could buy singularly so it subsequently became the new nag. 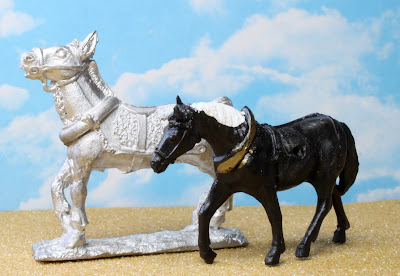 Initially I was just going to spray the carriage, perhaps a bit of dry brushing and that would be it, but in the end I decided to add a few personal touches the most obvious of these were the mud guards, created from  small off cuts of plasticard.

Other than the film itself I could find very little in the way of visual reference but I knew I wanted to try and imply that the carriage was in fact covered by a tarpaulin.  More strips of plasticard were employed along with some liquid greenstuff to give the impression of fabric.  A few button fastenings were achieved by using, of a things, the stem of a remembrance poppy. 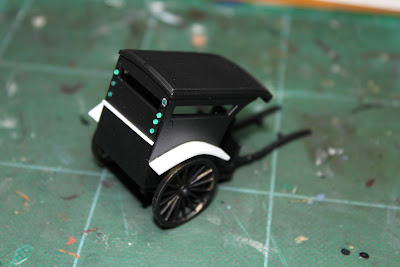 Painting was fairly straightforward and consisted mostly of dry brushing on the carriage and the usual palette for the pony.  One final detail was the use of a really thin strip of plastic tied in a knot to represent the reigns.
I have to admit that I'm absolutely thrilled with the results and of course delighted to have got another stalled project off the table.  Apart from been another piece of table top frippery I envisage it been used as a  possible side chapter in a game; for example, can the Witts escape before the Zulus arrive? 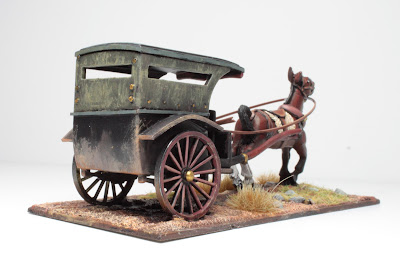