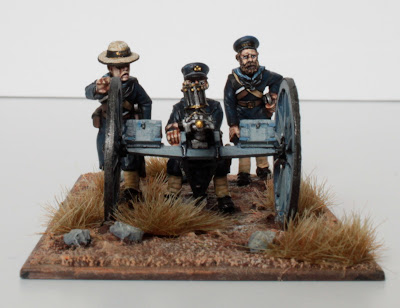 Another abandoned project finally sees the light of day and jolly glad I am too.  I seem to talk myself out of attempting anything new, worried that I may not like the results.  In this case it was the lack of any real knowledge of Naval Brigade uniforms that initially derailed the project, but thanks to a bit of web based research these splendid 'Empress Miniatures' finally reached completion. 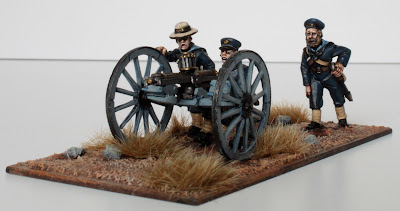 I have fond memories of the Gatling gun stealing many a scene in the old western movies of my youth, but it is not until relatively recently that I have given any real consideration to their destructive power on the battlefield, particularly when employed against an indigenous peoples armed with little more than spears.

The Gatling gun had multiple, rotating barrels turned by a hand crank, firing rounds without the need for links or a belt.   One of the key design features of the Gatling gun was its gravity feed reloading mechanism, which allowed a relatively unskilled operator to achieve the high rate of fire of two hundred rounds per minute.

Two hundred rounds per minute is all well and good but sustaining this rate of fire in the heat of battle must have taken some considerable nerve; particularly when the drum needed changing or the blasted thing jammed!  Take a look at the video clip below to see just how difficult it must have been to maintain a serviceable unit in the field, especially with a Zulu Impi about to overrun your position!
Posted by Michael Awdry at 11:33