It would seem remiss not to mark today with a post of some description and although many of the wonderful events planned to mark this anniversary have had to be cancelled, I for one will be taking some time to reflect on the sacrifices made by so many so that we may enjoy the freedoms that we do today. It is also important to remember that whilst the guns may have fallen silent in Europe on this day, the conflict continued until 15th August when it was announced that Japan had surrendered unconditionally to the Allies, effectively ending World War II.

In looking for some small way to show my appreciation, I stumbled across the following on the official VE Day 75 Celebration site, which may be of interest to others.  From Bruno Peek LVO OBE OPR, Pageantmaster VE Day 75:

My sincere thanks to the many thousands who registered their involvement and events and were looking forward to celebrating VE Day 75 is the ways planned. I know how disappointed you will be that these cannot go ahead as planned. However we are sill encouraging solo buglers/trumpeters/cornet players to play the Last Post at 2.55pm from the safety of their homes, along with the Pipers undertaking Battle’s O’er and VE 75 years at 3pm local time in the country they are in, as well as Town Criers, Crying out for Peace at 6.55pm in a similar way too on the 8th May 2020.

We are also encouraging all those taking part to undertake the ‘Nation’s Toast to the Heroes of WW2’ at 3pm on the 8th May, from the safety of their own home by standing up and raise a glass of refreshment of their choice and undertake the following ‘Toast’ –

“To those who gave so much, we thank you”

using this unique opportunity to pay tribute to the many millions at home and abroad that gave so much to ensure we all enjoy and share the freedom we have today.

In addition, The Royal British Legion is calling on people across the UK to join in a moment of reflection and Remembrance at 11am on Friday 8th May, the 75th Anniversary of VE Day, and pause for a Two Minute Silence.

I shall be dusting off the bunting and bedecking the front of 'Awdry Towers' this morning and, as all good posts should have a miniature of some description, leave you with this 'Warlord Games' Winston Churchill, armed with his Tommy Gun, painted to commemorate the day.  Who knows, perhaps he will be found hiding in one of the rooms of the castle? 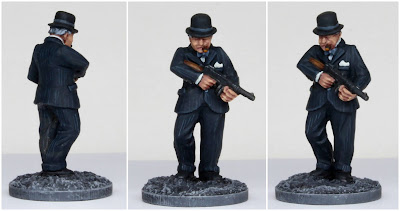 “To those who gave so much, we thank you”
Posted by Michael Awdry at 08:00