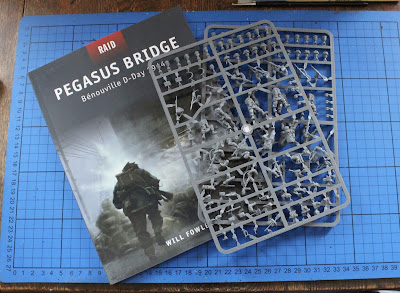 Regular visitors to '28mm Victorian Warfare' will be only too aware of my crippling inability to focus on any given topic for a considerable period of time.  So when the opportunity to contribute, albeit in a small way, to a project that looked to commemorate the exploits of those brave souls some seventy five years ago, it was inevitable that I would want to get involved.  The project conceived by my friend and colleague James, was to deliver a lunchtime lecture to pupils, staff and parents on the action in and around Bénouville, now often referred to as the raid on Pegasus Bridge.

The date for this lecture was to be 6th June 2019, well it seemed fitting, but a germ of an idea started to take root.  James had become interested in some of the MDF pieces that I had been putting together and started to wonder if he could build the bridge to illustrate his talk?  I was able to point him in the direction of the various companies that were producing such a model, but it is fair to say that this is a man who likes a challenge and so he set about designing and building his own.

Now from the outset, I need to share that James is an extraordinarily talented chap, he is far too modest to say so himself and will find all this excruciatingly embarrassing, but his engineering skills and his ability to create drawings in 2D Design and SolidWorks, is just mesmerising.  Within twenty four hours of leaving him with some pictures and drawings of the bridge, he had created working drawings that could be exported to the laser cutter. 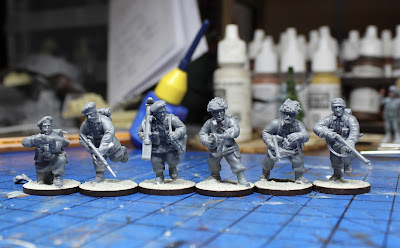 I think he rather relished the challenge of the design process and as his understanding of the practical construction problems improved so did the complexity of his designs.  Having created the bridge to scale with 28mm miniatures it wasn't long before talk of having some troops to accompany it was had.  James subsequently 'won' some on eBay, but when they arrived there were not quite what he had hoped for and seeing that he was a little deflated, I quietly went off and ordered up a couple of sprues from 'Warlord Games' of their finest British Paratroopers to represent the soldiers of the Oxfordshire and Buckinghamshire Light Infantry.  When they arrived I constructed the first sprue myself, painted them and made a gift of them to James along with the other sprue.  So began my small contribution with the project.

I have to say that I rather enjoyed putting these chaps together, such is the quality of detail and variety of poses available on each sprue.  Once assembled, I decided to base them on 20mm MDF bases from the ever reliable 'Warbases'.  This was a deliberate decision as I knew James wanted to reduce this aspect as much as possible; they were there to illustrate the raid, not as wargaming pieces.

James duly constructed his sprue, but seemed delighted with my offer to paint his up to match the original half a dozen that I had done.  I was well and truly hooked at this stage and was trying to find all manner of ways to help, well I hope I was helping? 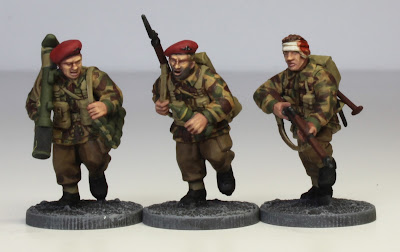 As the bridge started to take shape and with the troops completed we took stock of our achievements.  As a thank you for a job James had done for me* I had bought him the 'Sarissa Precision' Horsa Glider.  Such was his professional curiosity that no sooner than he had built it, James started to consider the possibilities of converting it to show the seating arrangements inside.  As it happens this has proved a step to far, but it did make it to the ever expanding model of the bridge and again, I was happy to oblige it with a simple paint job.
*An amazing terrain piece for my Star Wars universe, but more of that another time.

So as we near the actual anniversary, and of course the day of the lecture, I am hoping to share a series of posts that detail the work that has gone into illustrating what has to be considered one of the most daring and successful actions of the Second World War.