We are all Negan 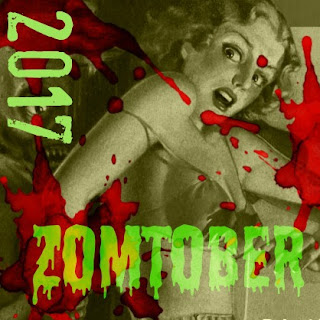 It seems strange to report that I have not painted anything for a couple of months. Looking back to the now long distant summer holidays the big push to complete all the miniatures and terrain required for my Congo game rather sapped my hobby mojo leaving little more than a husk of gamer, but one that was able to sit back and bask in the warming glow of a job well done.

The middle of August saw the demands of the day job kick in again and as a treat to mark the end of the holiday I bought into Fantasy Flight Games' 'Imperial Assault'*. Guided by the incredibly generous Steve of the 'Game Cupboard' fame, I have been enjoying tinkering with the skirmish game and running a series of solo games.  It would appear that the lure of the Dark Side was just too much with the Dark Templar and Bullcher Feb both falling under the game's spell providing us with a wonderful day of Star Wars fun in September.
*bought into in a big way!

With the return to work proper I have found little time to sit quietly and paint, which has aggrieved me greatly, particularly as this aspect of the hobby, perhaps more than any other, is the one that helps to keep my word in equilibrium.  At times like these sometimes all a chap needs is a gentle nudge to reignite his love of all things hobby and I can’t thank enough the timely intervention of ‘Zombtober 2017’.  With the month almost at a close, I am not going to be able to get as many miniatures done as in previous years, but I am hoping to ease myself back into the hobby by painting at least one survivor and a shambling sack of sorrow!

So without any further ado let me present to you my 'Studio Miniatures' not Negan.  Dean, to give hm his listed name, actually comes with the option of weapons, bat or pistol, but given the now iconic status of the barbed wire wrapped baseball bat, the choice was only ever going to be Lucille. 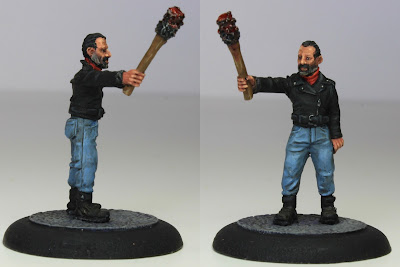 It was difficult to imagine how a character so larger than life in the comic books was ever going to transfer to the small screen, but Jeffrey Dean Morgan's portrayal of the psychotic, yet charismatic, leader of the Saviours has proved to be a revelation. As a result when it came to painting this rather nice piece, albeit not the most natural of poses, it was an easy decision to replicate the character's costume from the 'The Walking Dead'. 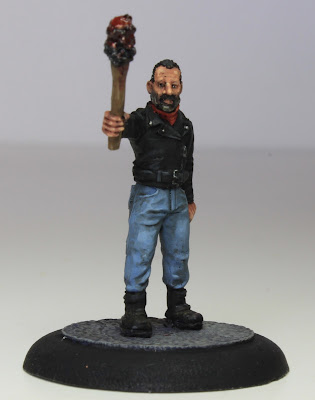 Just as an aside, a group of friends have taken to hosting the start and end of each 'Walking Dead' season, with Awdry Towers being the venue for the Season 7 finale.  A simple supper followed by the episode was planned, but I decided to try and make something a little different for pudding - Lucille herself!  This was a chocolate covered, Rice Krispie and marshmallow bat, wrapped with strawberry lace barbed wire and served with lashings of brainlike fruit compote.  Great fun, but nearly six months later and I am still trying to get the red food colouring out of my chopping board! 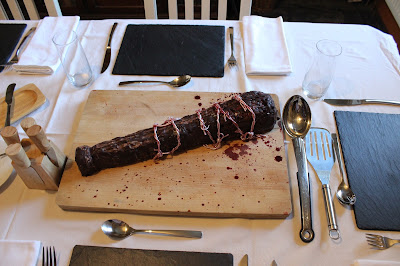 So with the 'Walking Dead' returning to Blighty's small screens on the 23rd October we have our invite to the opening episode and thoroughly looking forward to the new season, I just need to think of a new show stopper? 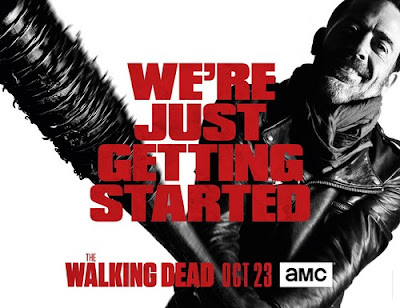 “Lucille is thirsty. She is a vampire bat!”