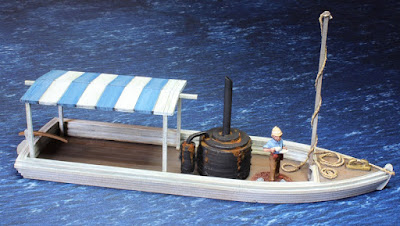 I think that it would be fair to say that my challenge did not go exactly as I planned insomuch that larger* units of historical miniatures were been overlooked in favour of smaller, more interesting items. I am squaring this away as a direct result of my inability to focus on one thing at any one time and although initially frustrating I decided to embrace it wholeheartedly and enjoy the ride - so to speak!
*larger for me anyway
To that end let me present to you one of my last offerings to the challenge in the shape of a 'Sarissa Precision' Colonial Steam River Launch.  Whilst I know that not everyone is a fan of the seemingly relentless march of MDF in our most wholesome of hobbies, I have to confess that I am a bit of a fan.  I really enjoy putting these kits together and in the case of the 'Sarissa Precision' models there is plenty of scope to add your own personal touches. 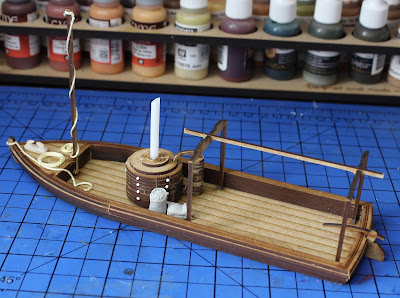 Having said that when it came to mine, I shamelessly cribbed much of the colour palette and additional extras that I had seen on the Sarissa display stand when I last visited 'Salute'.  The Coal Sacks were sourced from 'The Battle Forge' and I affixed some rivets to the boiler before swapping out the somewhat angular funnel for a more cylindrical piece of tube. 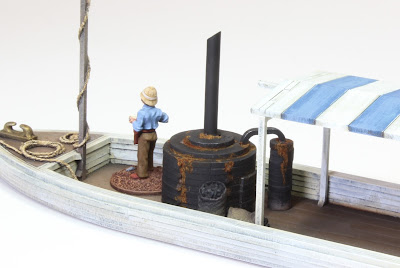 As with all MDF models, priming is essential as the nature of the material means it will absorb great quantities of paint if you do not.  That said a liberal spray with 'Games Workshop' black undercoat seemed to do the trick, followed by a couple of passes with the trusty airbrush before the details were picked out with a brush.

Once completed, I set about looking for a suitable skipper and felt that a 'Wargames Foundry' Stouthearted Brit, enjoying his cup of Earl Grey was perfect for the job, but wait, what was that breaking the surface of the great grey-green, greasy Limpopo River? 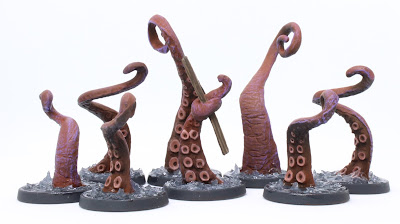 As I mentioned at the start of this post, I am often misdirected by the smallest of things and in this case it was the notion that there might be something lurking beneath the waves, ready to ensnare this humble craft. Perhaps lured by the rhythmic thumping of the steam pump, something long forgotten has been stirred from its slumber. In this case some plastic tentacles from my 'Rum & Bones' Kickstarter sufficed and they seemed perfectly responsive to paint. Not content with paint alone, I used a little Vallejo water effects to give the impression of them breaking the surface. 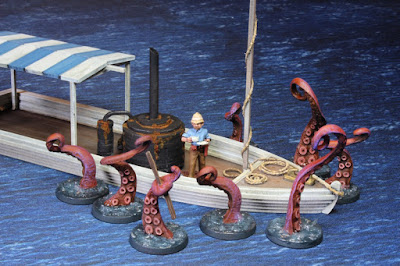 So this was another entry for the challenge completed, but perhaps more importantly another itch scratched.  Maybe the launch will resurface in a 'Congo' scenario, or be seen ferrying troops ashore along the Irrawaddy, but either way it has proved another hugely enjoyable distraction for yours truly. 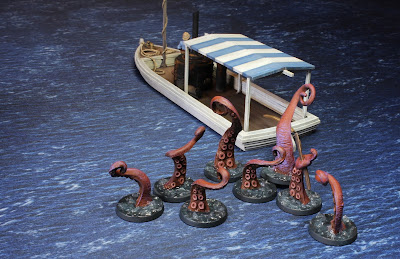