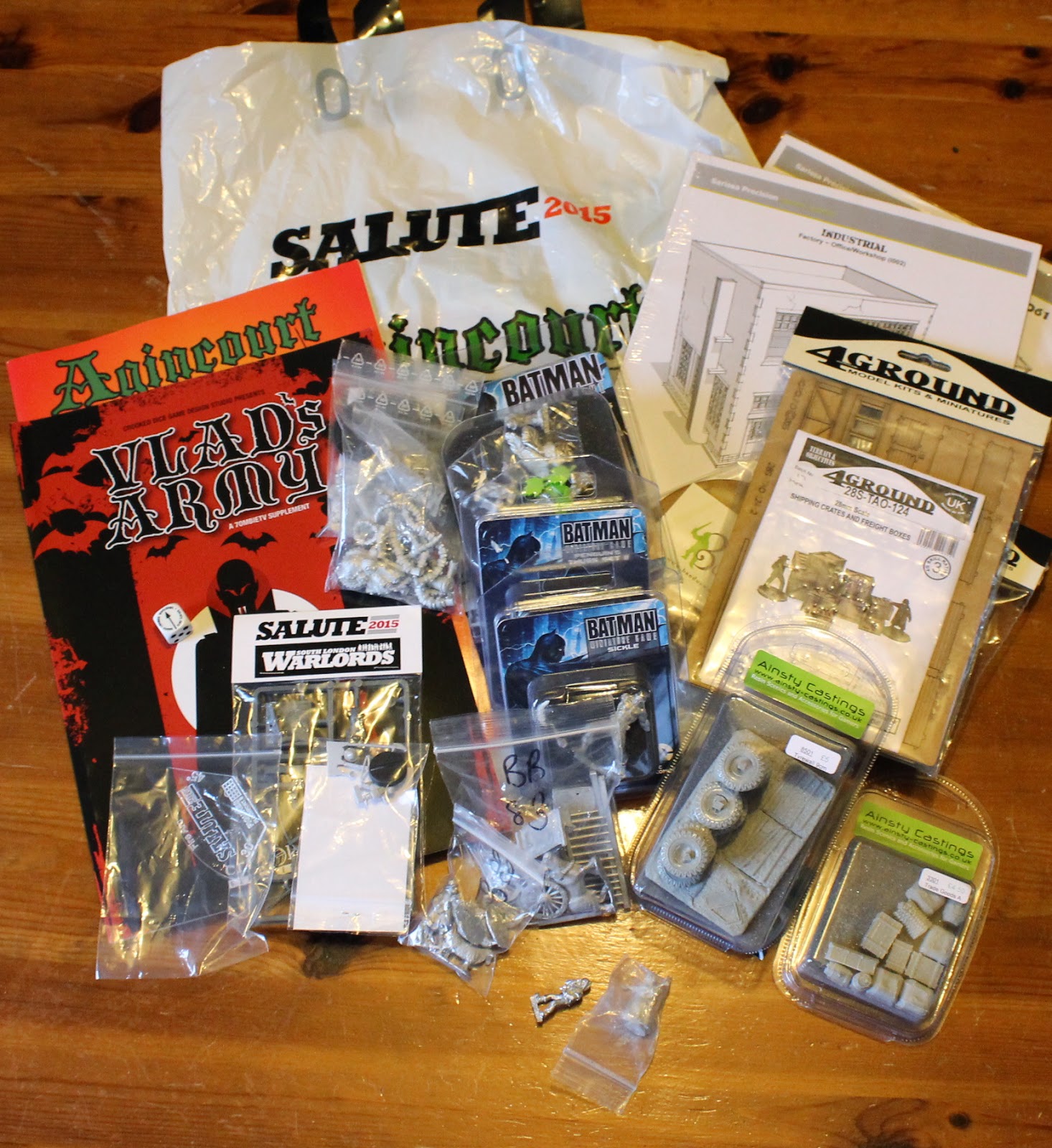 Phew!  What a day and as predicted I am somewhat behind the curve with this post due to the exhaustive debrief following a extremely tiring journey home.*

*We had to stand for two hours on the train, not quite what we had planned!

So 'Salute 2015' has come and gone, my fifth apparently and perhaps the most enjoyable yet.  I had no real plans for purchases and so just pootled from stand to stand, game to game and looking at the photographs of the day on other blogs clearly missed a great deal!  Still myself and the 'Provost Marshal' seemed to amass a fair about of swag between us. Although mine was restraint, by comparison to previous years, I did treat myself to some shiny new Batman toys.  These are proving a welcome distraction and I'm looking forward to painting them regardless of whether or not they actually get on the table.

It seemed to me that this year was all about laser cut MDF; the future of wargaming terrain?  I was genuinely impressed by the display models on the 'Sarissa Precision' stand and a couple of packs along with some from '4Ground' managed to find their way home with me.   Some always useful packs from 'Ainsty Castings', yet another set of skirmish rules from 'Crooked Dice' and a shepherd set from 'Redoubt Enterprises' completed the purchases .

I did manage to track down Kawe from 'Westfalia Miniatures' and bag my free promotional Halfling along with the final elements from the 'Steampunk Menagerie' kickstarter - every chap needs a Clocktopus!  I need to add at this point that Kawe was also incredibly generous and added a few other surprises to my pledge - thank you so very much!

Speaking of gifts thank you also to 'Clint' who passed on a zombie hunter from the new 'East Street Games' Brains & Bullets game - this will be promoted to the front of the queue and I need to have a closer look at their new rules when released; thank you also for the fudge, the 'Saintly Mrs. Awdry' was deeply impressed!  I was also passed a miniature from Andrew 'Loki' Saunders, which is apparently connected to the 'Analogue Hobbies Painting Challenge', but I need to clarify that a little more.

Of course the highlight for me was the Bloggers' meet at lunchtime and it was great to see so many now familiar faces and some new ones too - MikeC and Simon 'Blaxkleric' it was great to finally meet you both.

Finally then, the photographs, well the few that I took!  As usual I am armed with a camera, but failed to really do the event justice.  As my hands were busy squirrelling away my purchases the camera was consigned to the bottom of the bag.  Before that happened there were a couple of things that caught my eye.  The first, a hugely entertaining game from 'Bexley Reapers Wargaming Club' saw a troop of G.I.s running the gauntlet of marauding zombies to escape to the shore and the boats waiting for them there.  All the stops had been pulled out with regards to the terrain, including lights, sounds and even dry ice! 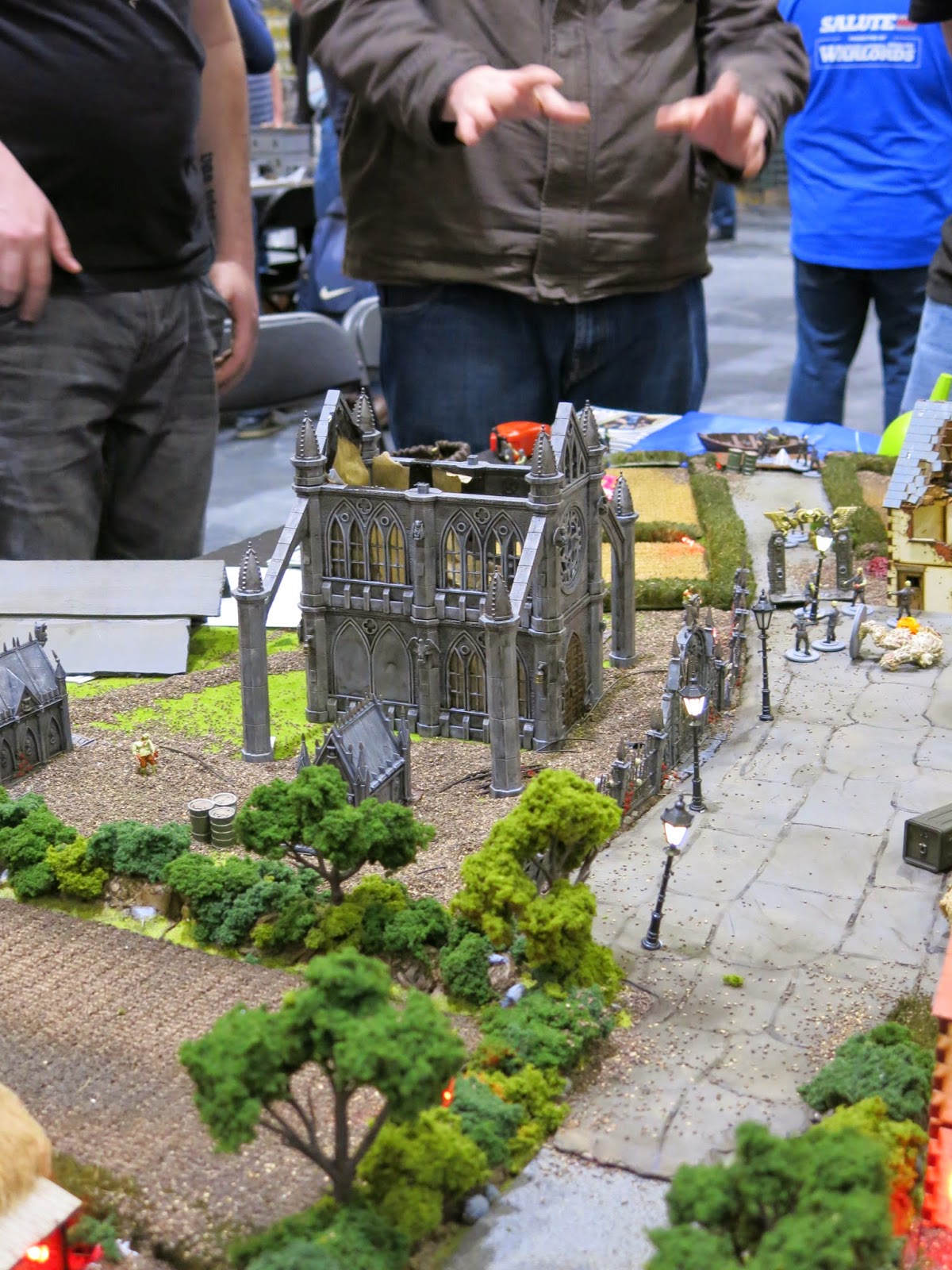 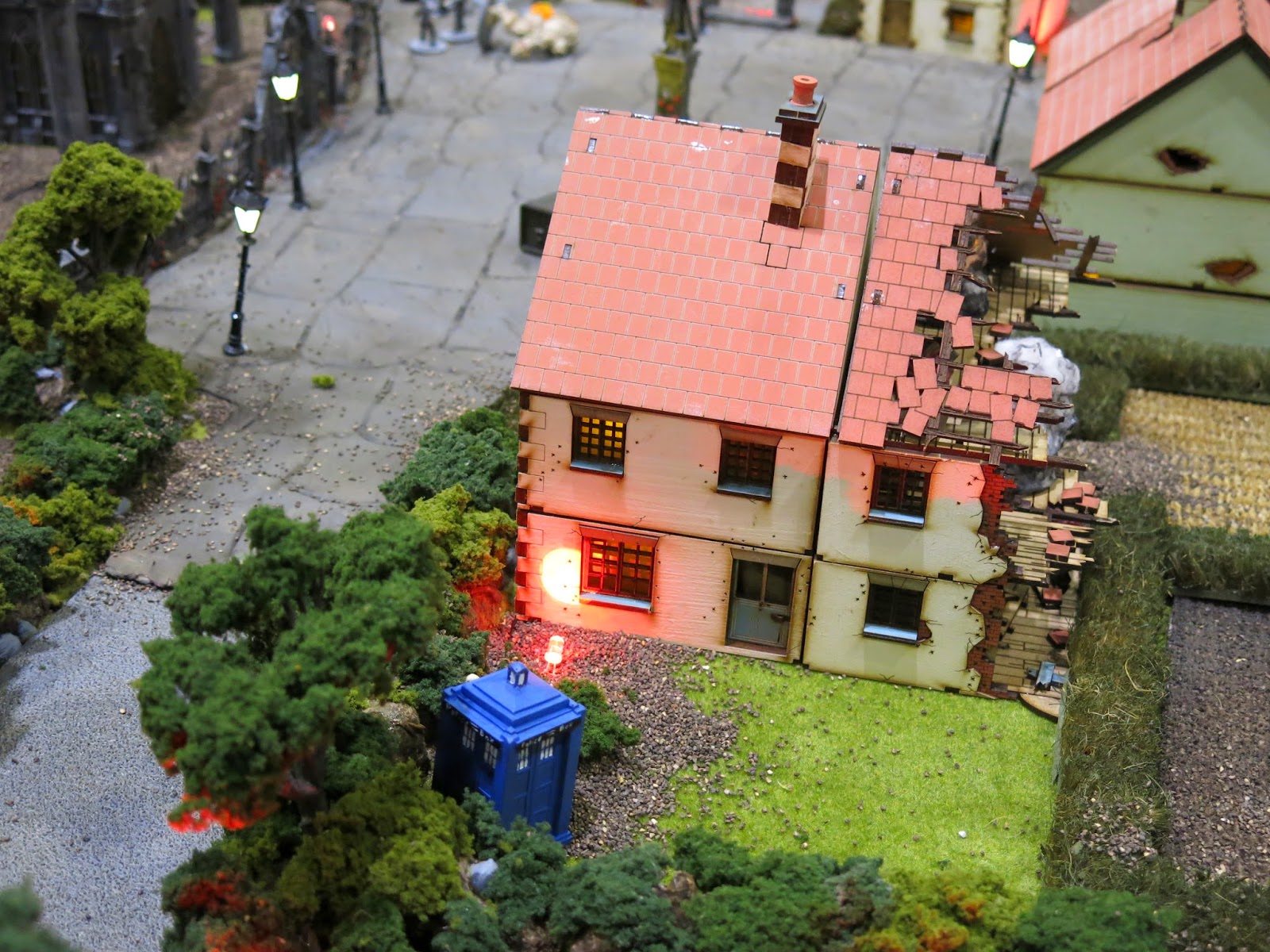 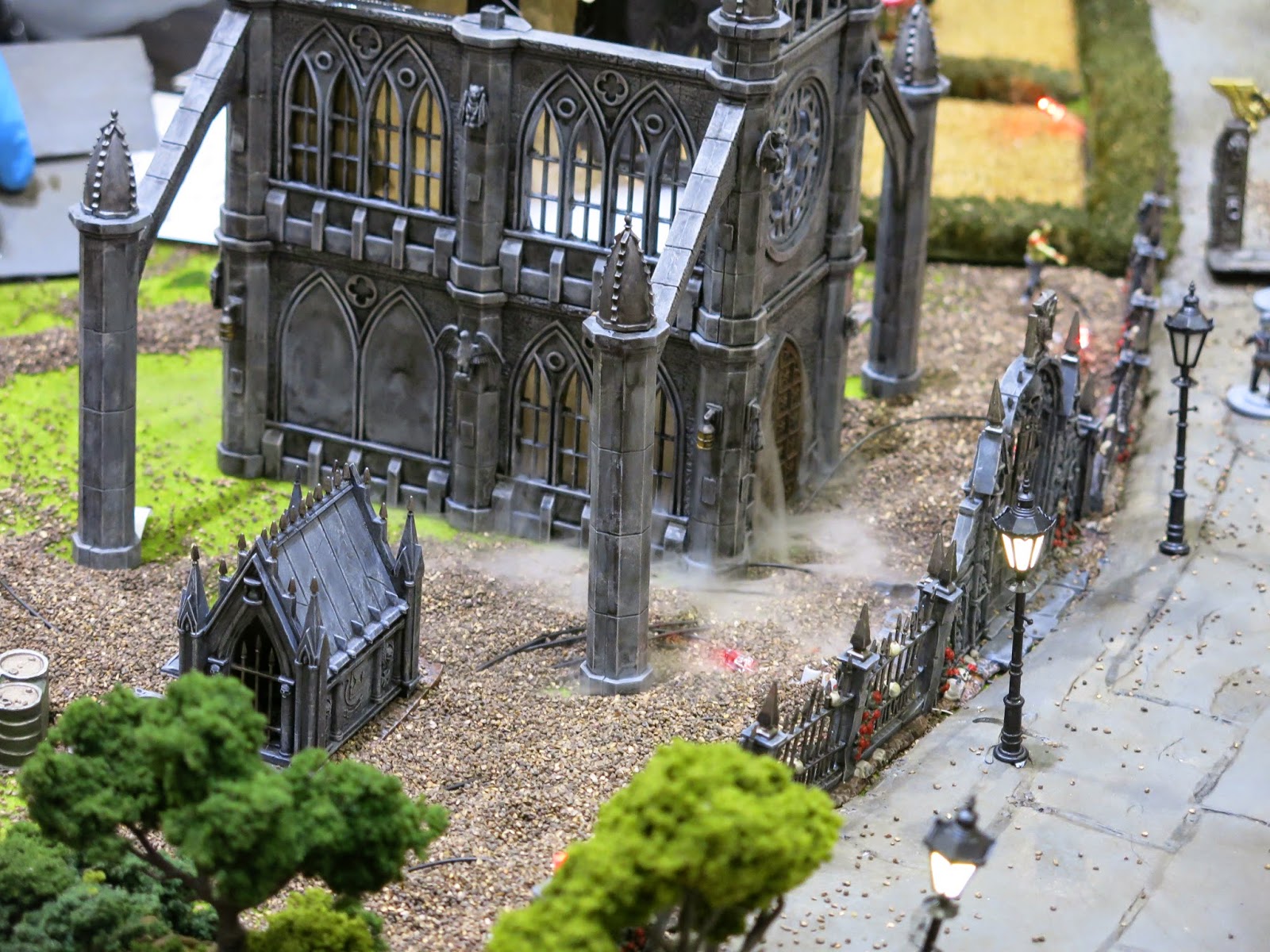 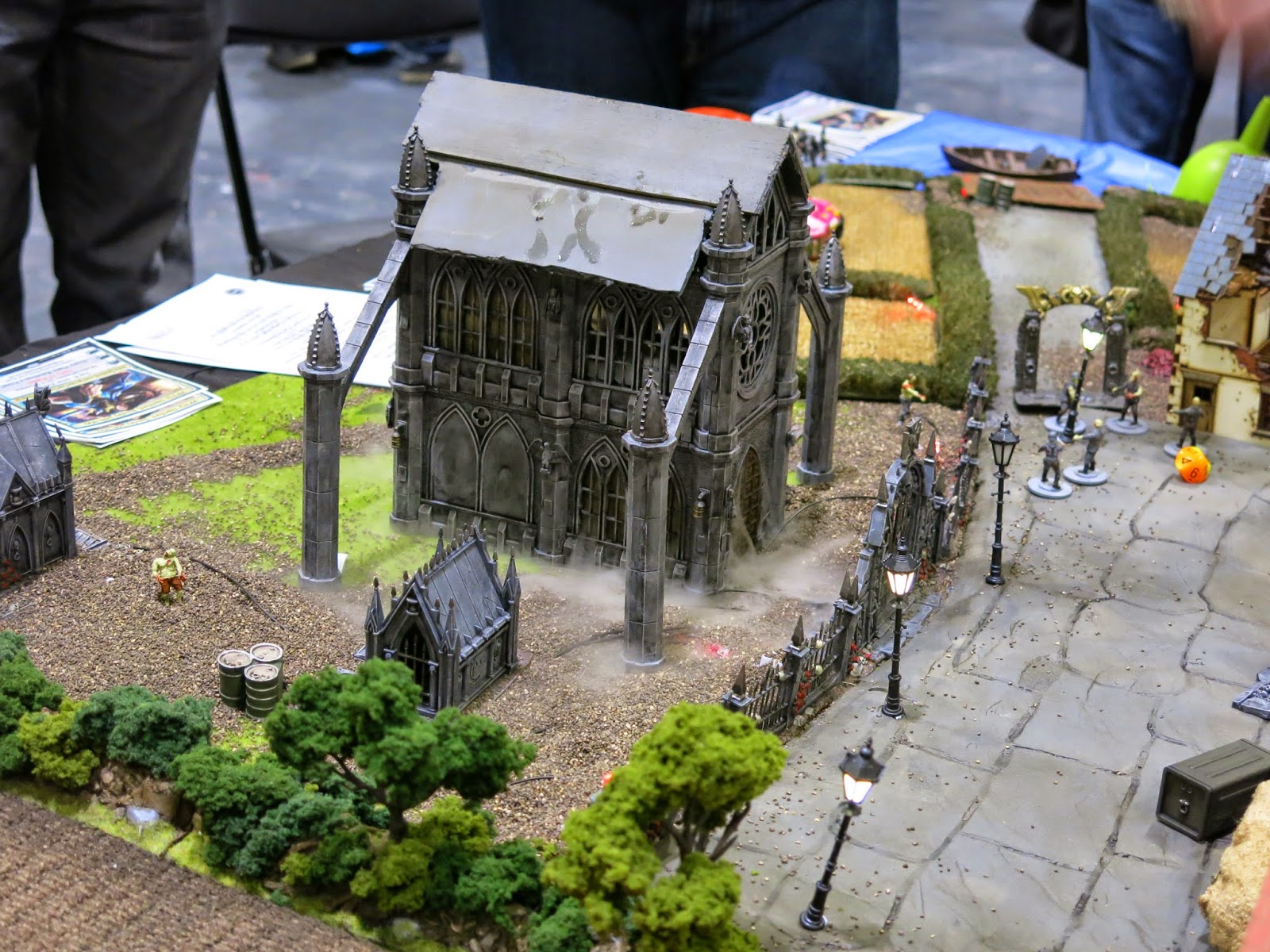 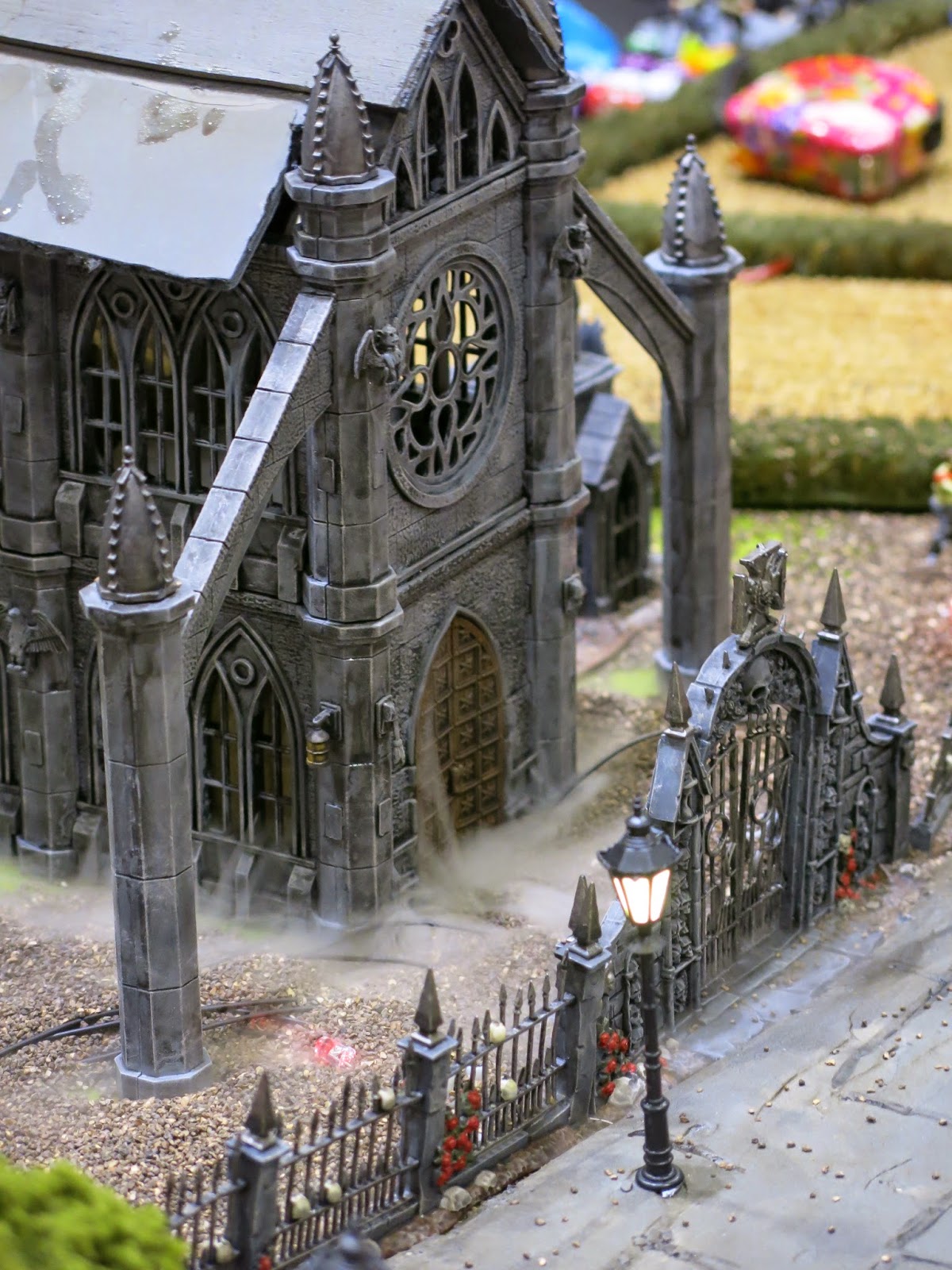 The latest pre-release model from 4Ground was an awesome looking Parish Church, not cheap, but my word it looked good! 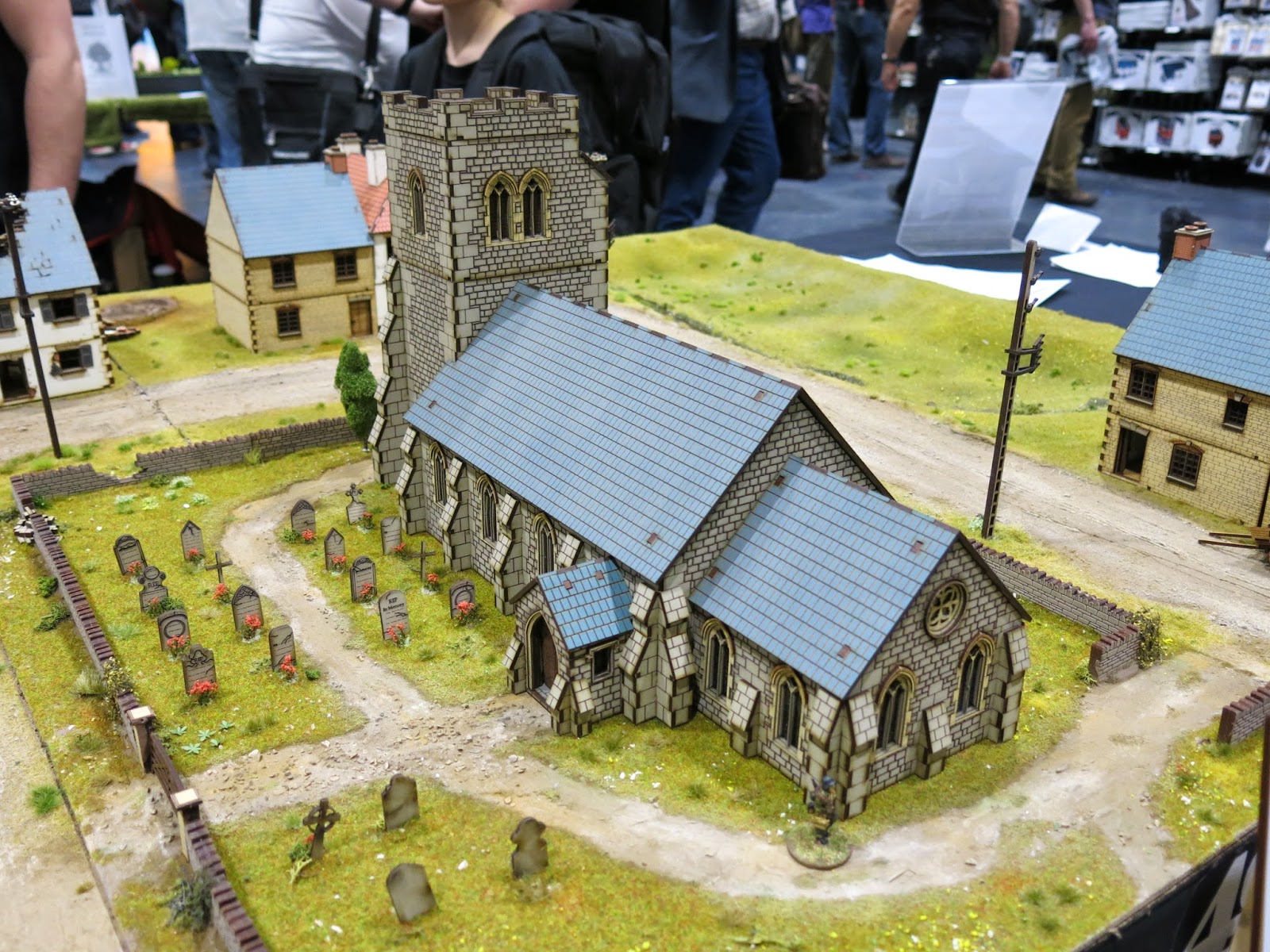 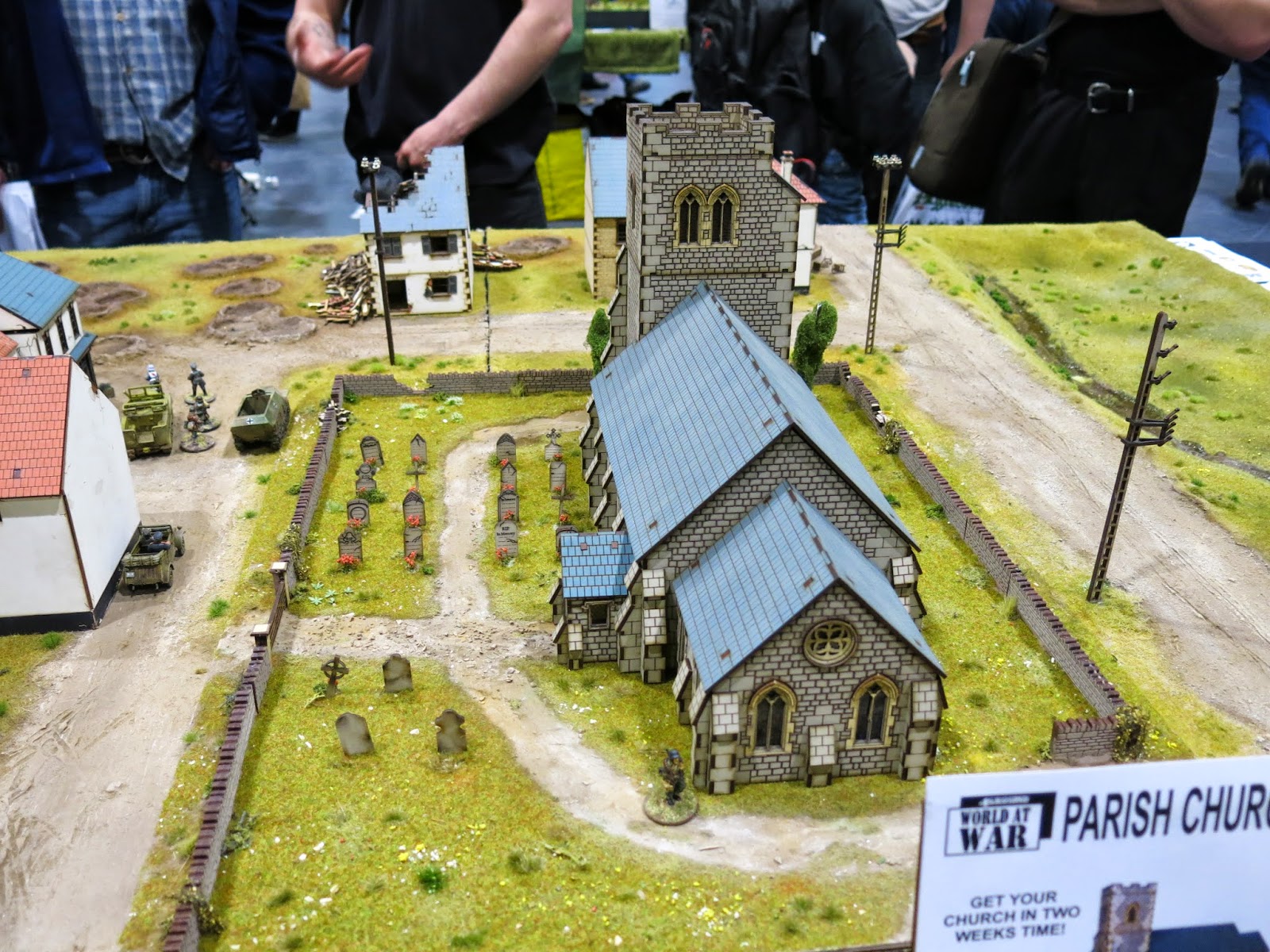 More MDF on show again with the Micro Art Studio's Wolsung game, this sort of thing just seems to capture my imagination. 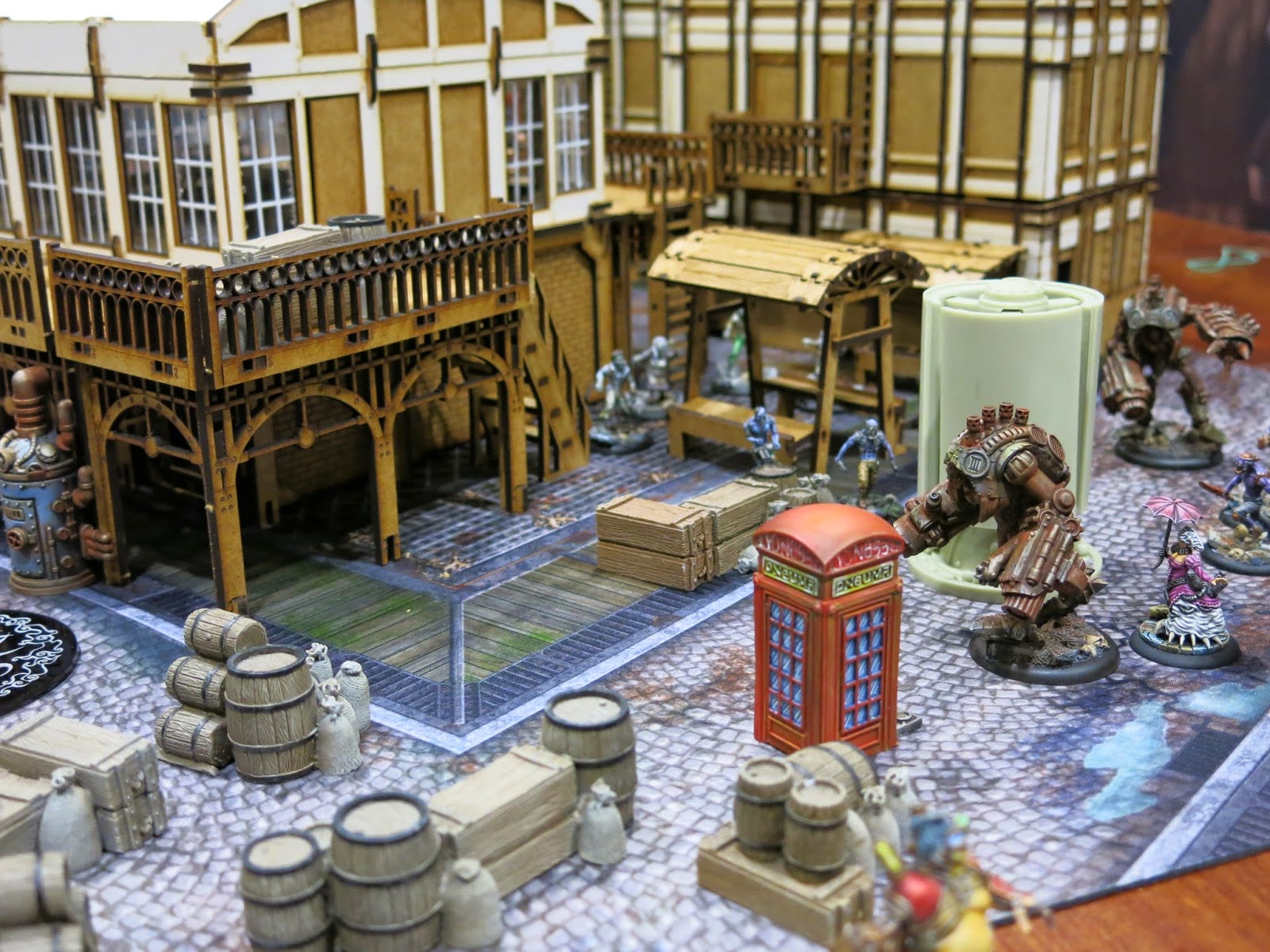 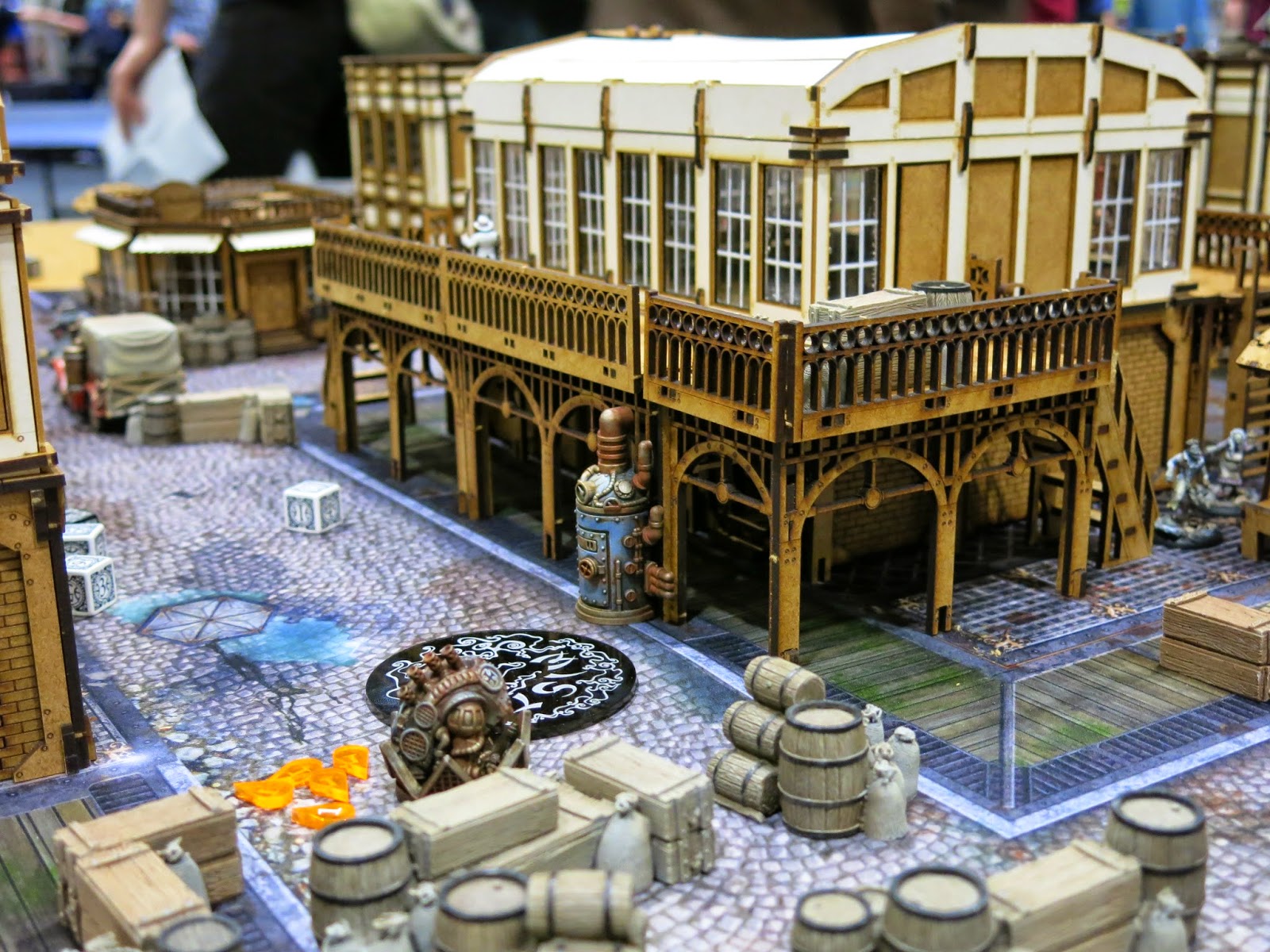 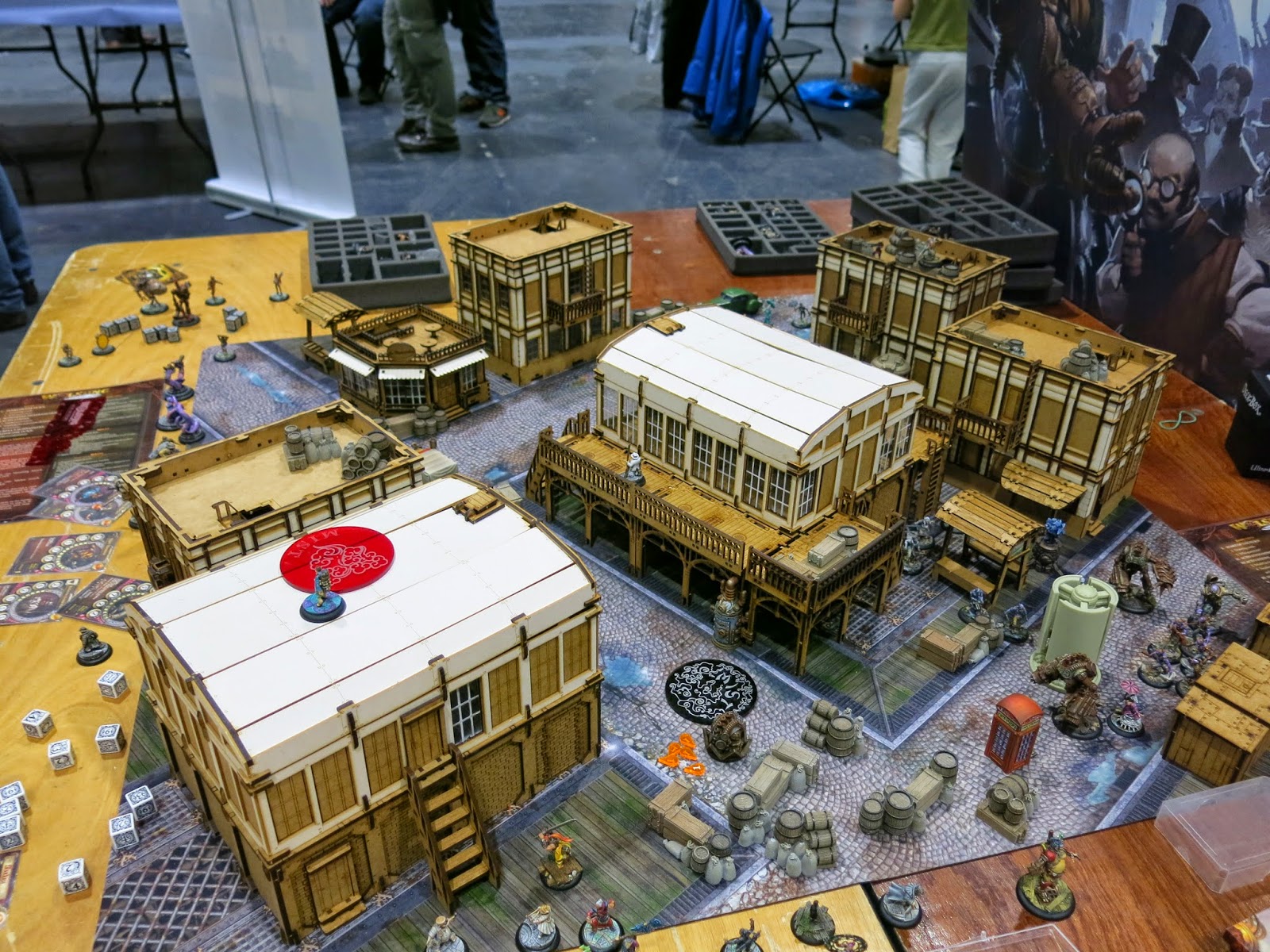 So that was that for another year, well done 'South London Warlords' a great show, obviously well attended by traders and clubs alike and yet comfortably so - looking forward to next year already!