Somebody give that man a hand! The penultimate bonus theme round of the 'Analogue Hobbies Painting Challenge' saw me scrabbling around the lead hillock for something vaguely 'Comedic'.  Bag after bag of shiny loveliness was rediscovered and just as quickly dismissed - why have I got a set of roller-skate wearing waitresses?  After a couple of abortive ideas my mind turned to those halcyon days of summer when, with the release of 'Osprey Publishing's' On the Seven Seas, it seemed that all the hobby community chatter was of a piratical nature. 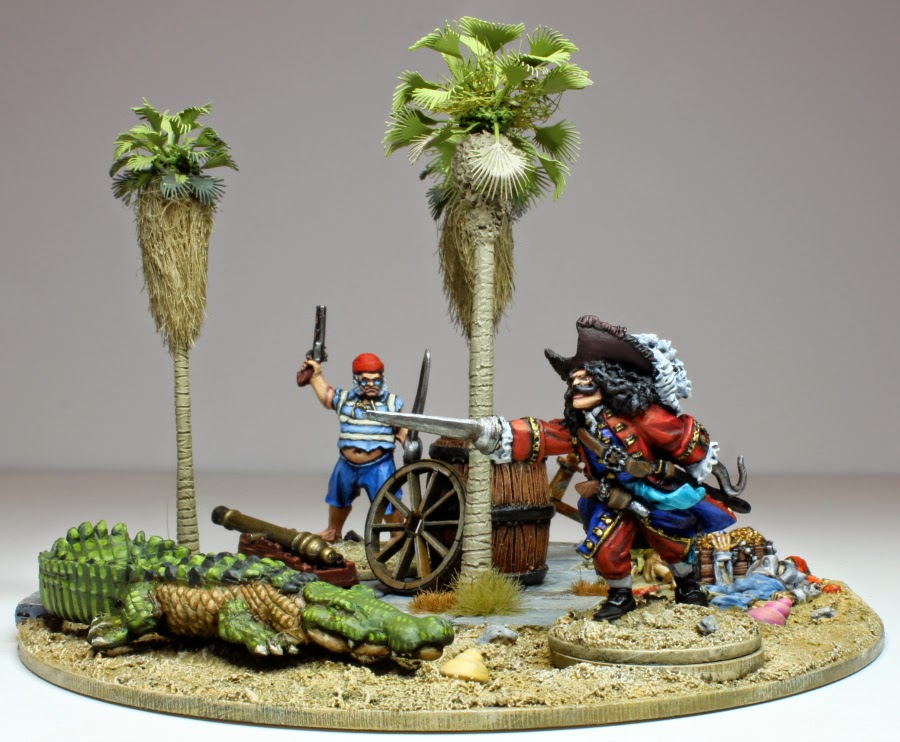 Not really looking to start yet another period, I did, briefly, dip my toe into the salty brine of the seven seas and plundered a box of Captain Hood's crew, for no other reason than they bore a striking resemblance to famous pirates of literature and stage.  The miniatures duly docked at 'Awdry Towers', but have since laid abandoned - until now!

What could be more comedic then a grown man, a pirate captain at that, being relentlessly pursued by a crocodile, whilst his first mate, a man so wonderful kind and yet completely incompetent looks idly on?  Yes, Disney's vision of Captain Hook was to create an archenemy for our ever youthful hero, Peter Pan that had the potential for menace, but ultimately, the inability to scare the children!  This, then, was to become my inspiration for the 'Comedic' round - an encounter between Captain Hook and he is nemesis, the crocodile.  Taking  a 'Warbases' 120mm MDF disc as a starting point, I set about trying to conjure up a possible scenario for my players to act out.  I have to confess that I really enjoy this process and in the back of my mind I am always considering that the area itself should go on to form a piece of terrain or become a 'set' for future painted miniatures* 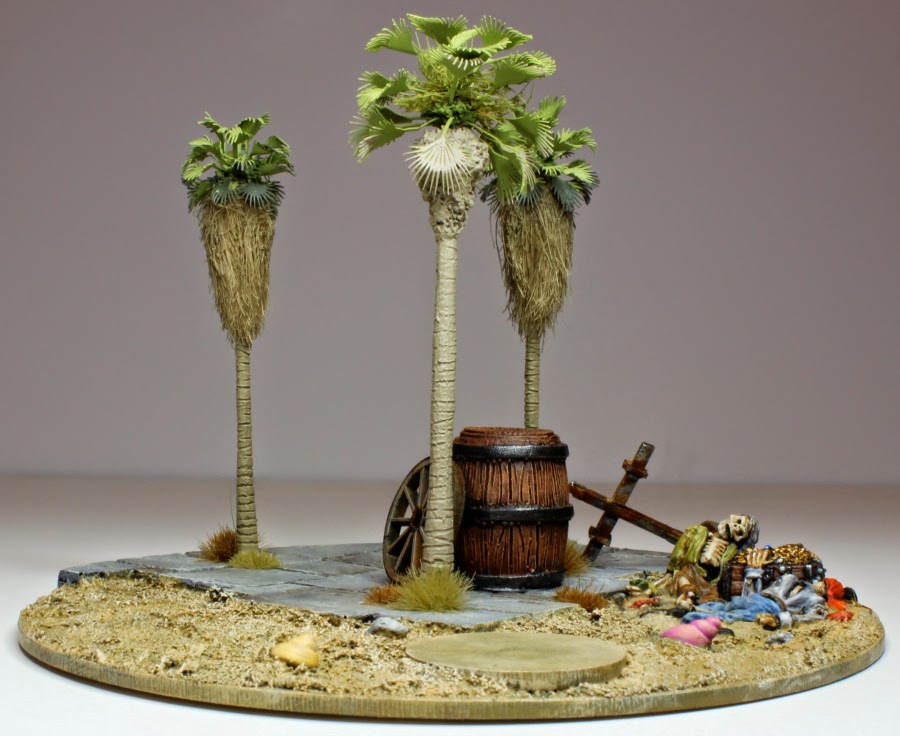 *Given that I backed the 'Rum & Bones' Kickstarter this is likely to become a real possibility!

So to the build, I was channeling shoreline meets hideaway and combined some stone slabs with my usual pumice gel and some miniature seashells to get me underway.  To this a rather splendid set piece, in the form of a 'Reaper Miniatures' Dead Man's Chest sculpted by Kevin Williams, was added along with other bits of flotsam and jetsam to create some depth. 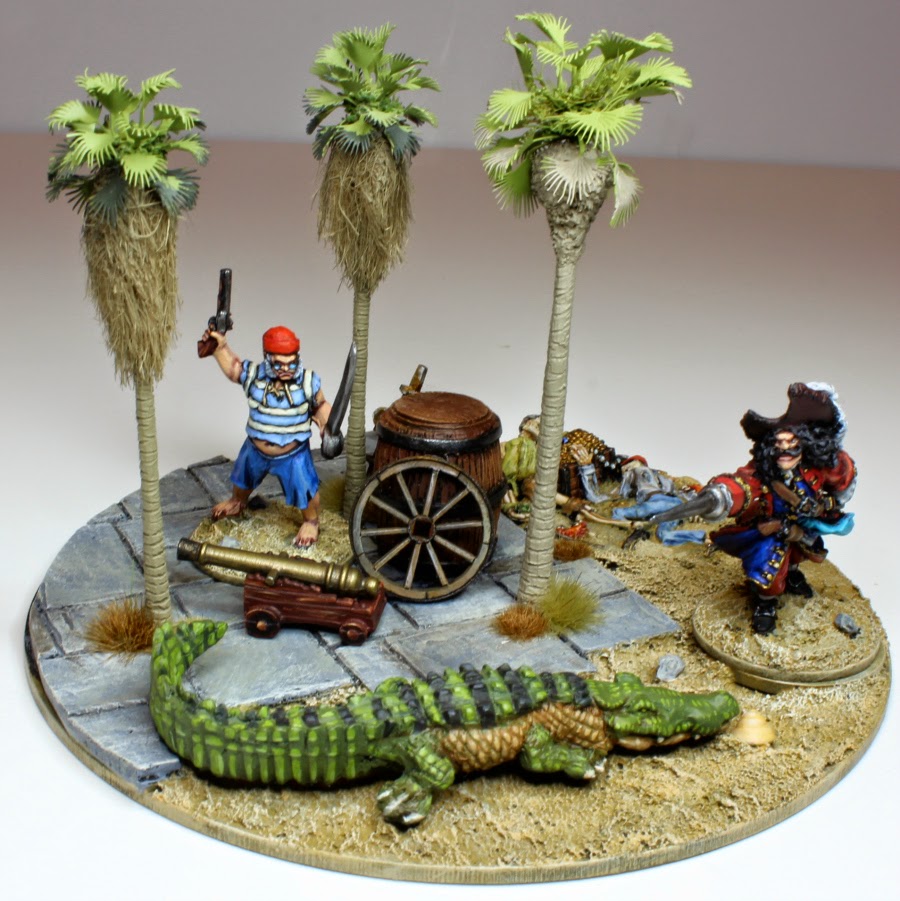 The rest of the miniatures were all from 'North Star Military Figures' with the 'not' Hook and Smee from the aforementioned 'Captain Hood's Crew' and a the crocodile from their African range.  Working on miniatures of this quality is a joy, the sculpts and casting just make the whole process thoroughly good fun and I hope that this sense of fun is apparent in the final creation. 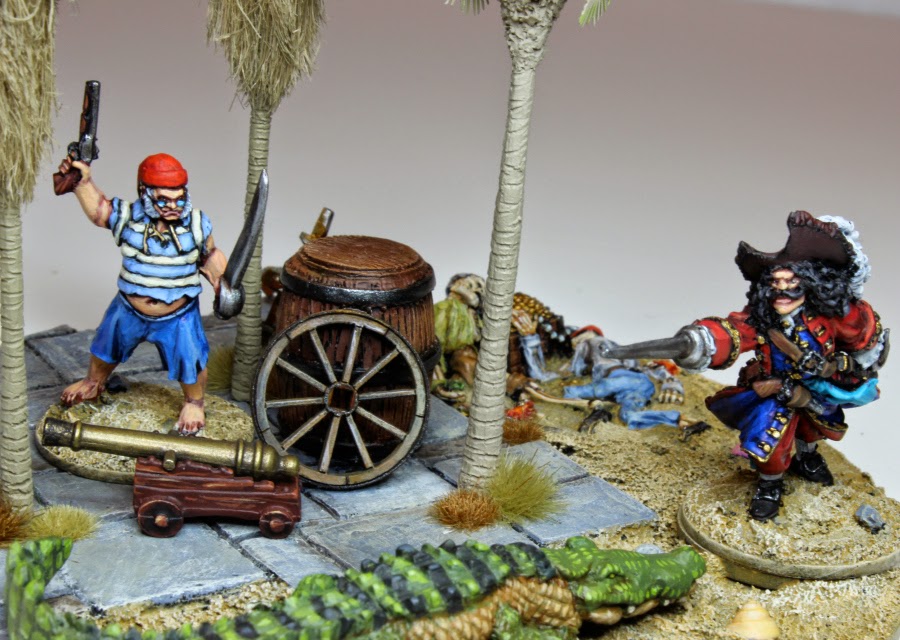 So in numbers the entry consists of four 28mm miniatures, two very much prone, a ship's cannon and a crocodile! 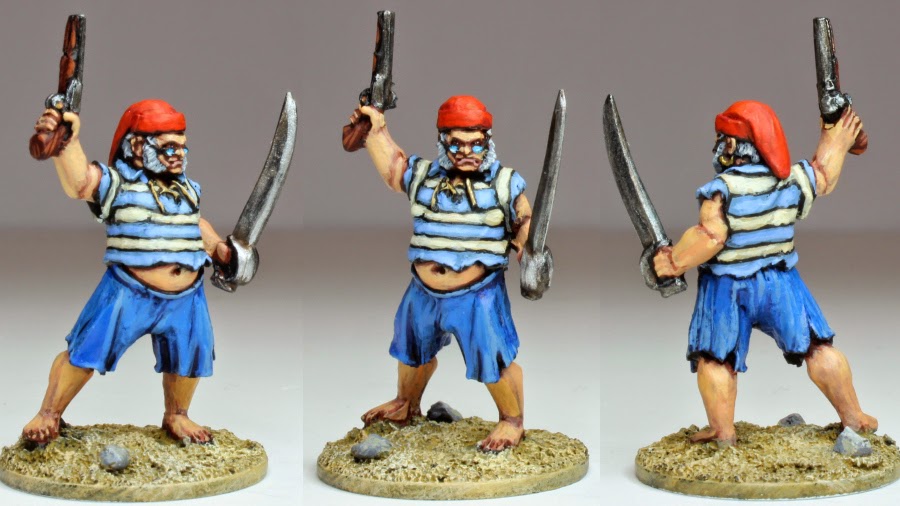 Just as an aside, was Captain Hook's lot always to be be the comedic interlude to Peter Pan's adventures in the Neverlands?  Apparently not, J. M. Barrie's creation didn't appear in the early drafts of the play, but was added as a front-cloth scene depicting the children's journey home.  This was later expanded with Gerald du Maurier, already playing George Darling, taking the role.  With the character now established, Barrie was able to flesh out his creation a little more stating that, "Hook was not his true name. To reveal who he really was would even at this date set the country in a blaze." 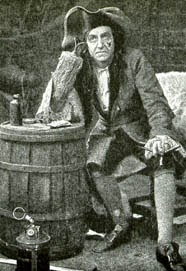 An Old Etonian, James Hook is described as "cadaverous" and "blackavised", with blue eyes and long dark curls resembling "black candles".  Known as the "boatswain to Blackbeard", his two principal fears were the sight of his own blood and the crocodile who relentlessly pursued him after eating the hand cut off by Peter.  A callous and bloodthirsty pirate, Barrie makes it clear that these qualities are "not wholly unheroic", but are a far cry from the cowardly and comedic traits that the Disney animated film of 1953 imposed on our luckless seafarer - "Bad Form". 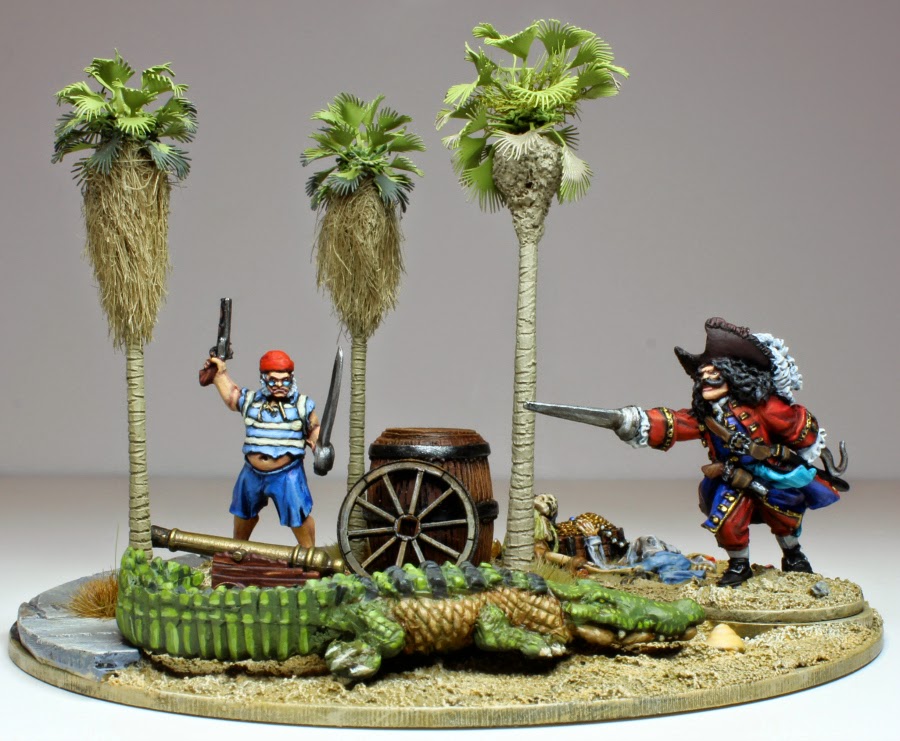 Do take the opportunity to see the latest submissions, perhaps even vote for your favourites entries, by visiting  the bonus theme round page here; once again there are some stunning entries, and certainly worth a look.