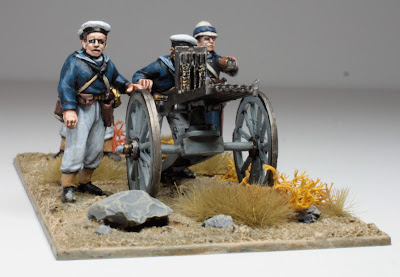 My most recent entry in the '3rd Annual Painting Challenge' saw more from the wonderful 'Perry Miniatures' Sudan range, this time the Gardner Gun crewed by the Naval Brigade.  Now overshadowed by the Gatling gun the Gardner was adopted by the British forces in a variety of forms including shipboard versions. 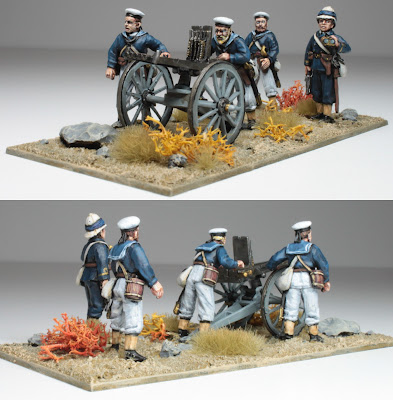 The Gardner was used by the Naval Brigade in the Sudan at various battles including El Teb and Tamai although in both actions the guns jammed.  Crucially this happened again at the battle of Abu Klea, where the gun jammed almost immediately resulting in all its crew, except Captain Beresford being killed.  It is this moment that is referred to in Newbolt's poem 'Vitaï Lampada', only he mistakingly mentions a Gatling!

The sand of the desert is sodden red —
Red with the wreck of a square that broke;
The Gatling's jammed and the Colonel dead,
And the Regiment blind with dust and smoke. 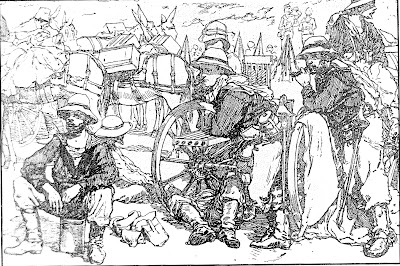 When looking for reference for the uniforms I stumbled across the above illustration by Melton Prior for the Illustrated London News, this combined with the wonderful example of the same piece by Mark Hargreaves over at his outstanding, 'Over Open Sights' blog really helped to get job done. 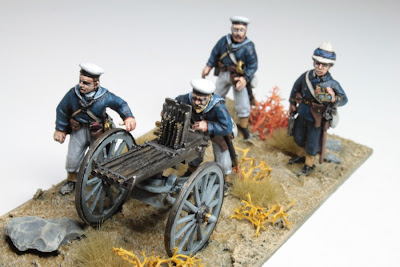