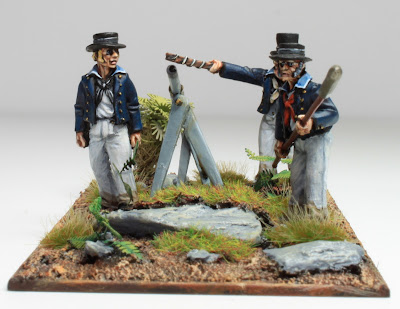 More from the wonderful ‘Empress Miniatures’, New Zealand Wars range; this time a Royal Navy rocket unit. Once again the supremely talented Mr. Paul Hicks does another excellent job on the crew, which were a delight to bring to life with a lick of paint. It was, however, the actual rocket launcher left me a little stumped.

From what I understand Congreve rockets, named after the man tasked with their development, were employed by Royal Navy crews during the wars. Unfortunately, such was the structural integrity of the Maori fortifications that were rendered practically useless, but still retained some worth as a psychological weapon – just imagine a firework display aimed straight at you! (Some might also remember the wonderful scene with the experimental Royal Horse Artillery Rocket Troop in ‘Sharpe’s Enemy’ that brought a much needed dose of humour to the episode.)

Anyway back to the rocket tube, it occurred to me that even at close range it probably ought to be elevated in some way so I decided to do a touch of ‘terra-forming’ and built up a slightly raised area using slate and some pumice gel. Having decided to work up the base a little more than normal, I reached for the etched brass bracken that I had used on my Maori warriors, it being deeply symbolic to the nation and the sharp eyed amongst you will have spotted a strange looking shrub at the back of the base. This was actually a palm tree that I had bought and a shining example of how one should carefully check the measurements of a proposed purchase before clicking the ‘add to basket’ button! 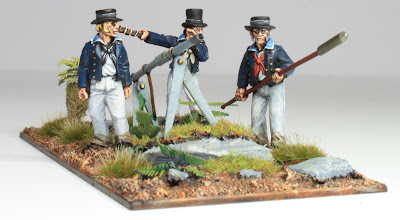 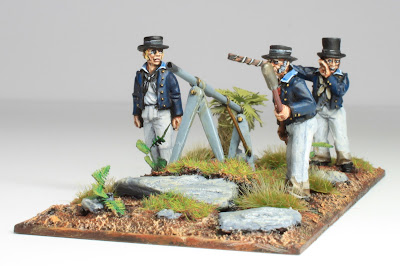 Those of you that have visited the sensational ‘Captain Richard’s Miniature Civil War’ will know that apart from been a hugely talented model maker he also has a propensity to ‘light things up’ with LEDs. I’d had some success at trying this with the ‘Wilderness Camp’ so thought I’d give it another go here. Not as successful or as obvious as I had hoped, so I may need to try again at another time. 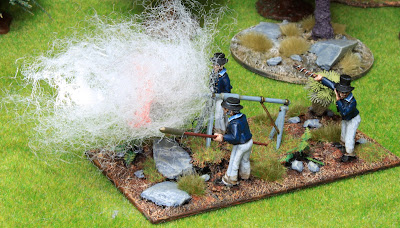 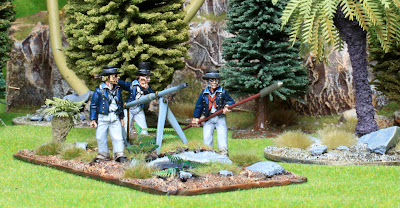 Finally my apologies for the rather picture heavy post, but having invested such a considerable amount of time on the stand I just wanted to showcase it fully – well what is the point of having your own blog if you can’t do what you want with it? Just for those who haven’t seen the episode of Sharpe that I was referring to earlier, here you go…

all together now, “over the hills and faraway”

If you really can't stomach another foppish British officer asking, "Aren't you the Johnny that Wellington raised from the ranks?" then the action starts about two and a half minutes in; enjoy!