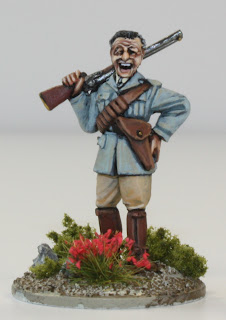 This splending creation is 'Mutton Chop Miniatures' thinly disguised alternate identity for the 'Carry On' stalwart, Sid James.  For those that may not be aware, 'Mutton Chop Miniatures' is the on line outlet of Mr. Paul Hicks of, amongst numerable others, ‘Empress Miniatures’ fame.  The site contains his modest, but oh so tasty collections designed with the ecenricities of a 'Very British Civil War' in mind.  In Paul's own words,

It is a collection inspired by the spirit of the 1930s and Heath Robinson styled contraptions. You wont find any large ranges of historical themed armies here!. You will find figures that are full of character and great for skirmishing or adding flavour to a themed army.

I have often viewed many superbly painted examples of his work over at the 'Gentlemen’s Wargames Parlour' and have often had to fight the temptation to get hold of them; well I'm fighting no more.  The will power finally gave way at 'Salute' and Sid represents the first of several packs that found their way into my swag bag. 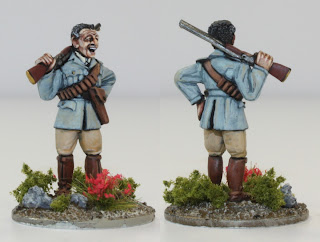 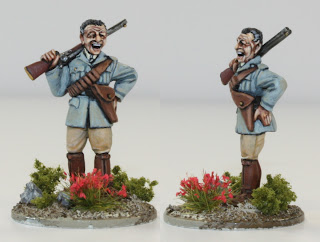 As with so much of Mr. Hick’s work this unmistakeable character really was a joy to work on.  Try as I might it was almost impossible not to hear Sid’s ‘Dirty Laugh’ reverberating around my head when painting him.  Having seen Pete Barfield's wonderful example of the same miniature on his excellent blog, 'PanzerKaput's Painted Review' it was clear that I had to use the same inspiration, that of Sid's Safari suit from 'Carry on up the Jungle'.  This at least opens up the possibility that he might be included in some form gaming action, perhaps,