As I was soaking in a hot bath at 'Awdry Towers' contemplating whether I could justify the purchase of  a Plesiosaur and perhaps some deep sea divers (obsessive, Moi?), my thoughts drifted back to the Amazonian rain forest and what would be the more dangerous creature there; the hunter or the hunted?  For some inexplicable reason my mind was transported back to the late 1980s and that piece of celluloid mastery that was 'Predator'. 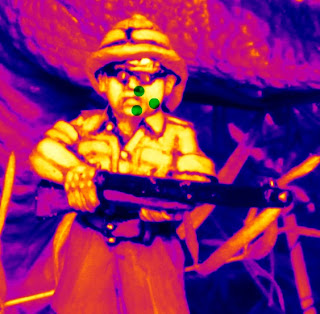 One of Mr. Schwarzenegger's better outings the movie was filled with such memorable quotes as:
"If it bleeds, we can kill it.",
"You lose it here; you're in a world of hurt."
and the immortal,

"Get to da Chopper!"
Of course the star of the show was the Predator itself with its cloaking device and penchant for collecting human trophies and my thoughts momentarily drifted from dinosaurs to aliens.  'What if there was a Predator lurking in the same jungle as my prehistoric beasties? 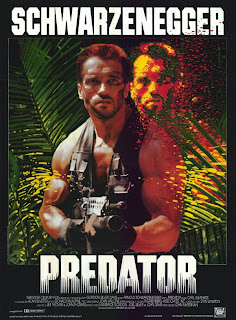 A quick towel and talcum and it was straight onto the infoweb to see if there was anything out there that could pass as the 'Predator'.  Imagine my delight when I discovered that the current company of choice, 'Copplestone Castings' actually had 'Hunter Aliens' lurking in their 'Future Wars' section! 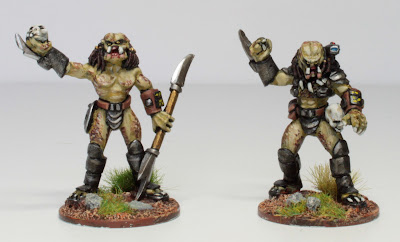 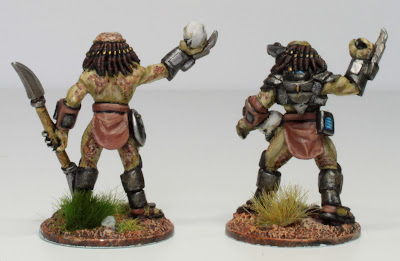 Before I knew what was happening there was a dull thud of a parcel hitting the mat!  I was now officially  distracted from my distraction!  That said they truly wonderful sculpts, as I've come to expect from Mr. Copplestone and a delight to paint.  I've only done the two without helmets for the time being and been heavily influenced by the original movie with regard to colour palette.   So pleased with the results that I couldn't resist having a little fun with them at the expense of one of my Allosauruses! 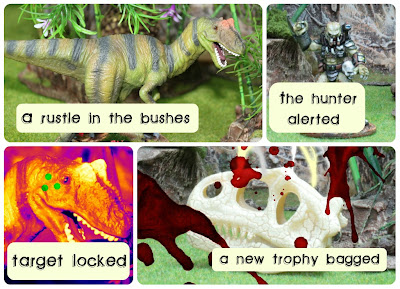 Now back to the small matter of a Plesiosaur and deep sea divers!
Posted by Michael Awdry at 09:05