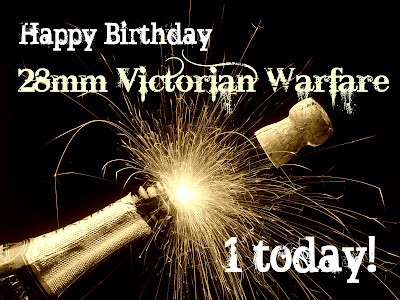 Today marks the first anniversary of '28mm Victorian Warfare' and I felt that it was appropriate to just take a moment or two to thank you, the reader.

There is surely very little that is more self indulgent that having your own 'blog', particularly one devoted to the collecting, painting and gaming of miniature warriors just shy of  three centimetres tall, but what an unexpected delight it has been developing and maintaining it over the year.

Conceived as a way or recording my tentative progress and observations through this most wholesome of hobbies, the 'blog' also became an important distraction from the day job; something that would allow me to unwind and just be myself.  I like to think of it, the 'blog' that is, along the lines of a gentleman's club around the turn of the 20th century.  Obviously a forward thinking club as ladies are of course more than welcome; the term gentleman referring to the level of cordial civility and courteous behaviour that I would like to extend to all guests.

As important as all these considerations are it has been the sense of community that has evolved over the year that I most cherish.  I can't thank enough, those of you who have opted to follow this most humble of journals, or those who have taken the time to leave comments; it really does help to drive one on to produce the best quality a chap can.

As I became aware that the anniversary was looming I also noticed that a couple of other milestones were in the offing, noticeably one hundred followers and thirty thousand page views!  It seems appropriate to make mention of them here, but in a short space of time both tallies have gone up again!  So without any further ado here is to over 100 followers,

1 year spending far too long lurking around the 'blogospere'!
A huge thank you again to one and all!
Posted by Michael Awdry at 09:11