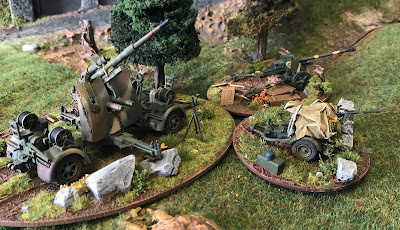 I have finally completed the last of the artillery pieces for the game, the 2cm Flak 30 cannon, reportedly seen been emplaced in the tree line barely 800 yards, northwest of the castle, alongside the '88.  This has proved to be the most troublesome piece to finish, simply because of my lack of knowledge in the period and my inability to get past an initial idea.  You see, my limited research only seemed to throw up the quad variant, which I duly picked up from 'Rubicon Models', but in my head all I could see was the single barrelled version that was used to terrifying effect in the film, 'Saving Private Ryan'; my issue was that no one seemed to be producing such a weapon, or at least one mounted on its wheels.
Being a stubborn sort of chap, I eventually stumbled upon one such gun, but for the life of me, I can't remember where?  I thought it might have been 'Great Escape Games', but having just looked on their website, it no longer seems to be listed.  Provenance aside, the piece was going to be problematic insomuch as it came in vast number of pieces and all made from very soft metal, that saw the barrels and other elements twisted horribly out of shape. 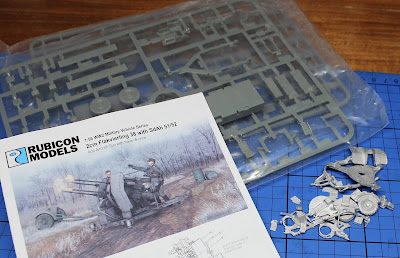 My plan now was to combine the plastic and metal kits together utilising the various pieces to build one serviceable gun, the additional chassis would be used to build an ammunition trailer, but it soon became apparent that the scale discrepancy between to the two kits was going to make such a build difficult and so the project stalled, until I stumbled across the image below. 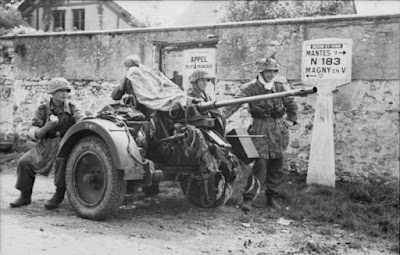 With the inclusion of a tarpaulin and a camouflage net, I could potentially hide all the difficult castings and so set about the piece with renewed enthusiasm.  The problem was that the metal kit didn't have any assembly instructions and so I was using the 'Rubicon Models' kit as a guide and know that I made a couple of bodged decisions along the way.  That said it started to come together and having decided on what size of 'Warbases' MDF disc to use, I rooted around the bits box to put together a small scenic base. 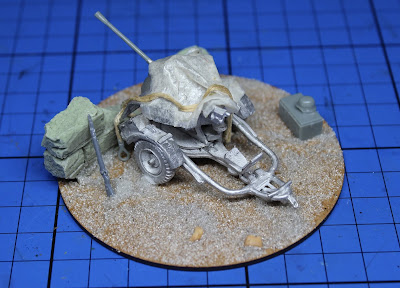 Having allowed the PVA soaked tissue paper, used for the tarpaulin, to dry, I was starting to feel pretty pleased with myself and duly primed the gun, working on the base to tie in with the other artillery pieces.  Unfortunately my clumsiness struck again when I managed to dislodge the replacement plastic barrel I had used.  On reflection, I was pushing my luck with this, applying the glue to only the smallest point of contact.  Not deterred, I drilled out the remnants of the existing metal barrel, allowing for a much more sung fit for the second plastic barrel, thinking all the time that it was a good job that I had four to work with! 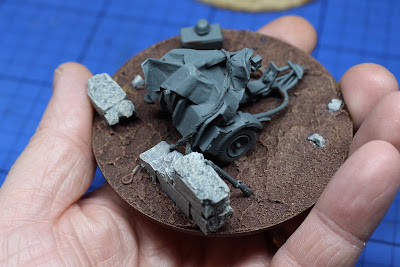 With the painting complete, it was time to create a camouflage net and decided on some gauze bandage liberally soaked with a combination of sepia and green inks.  This needed some dry brushing once it had dried and then it was just a case of threading in some lichen pieces, before gluing to the lower part of the carriage. 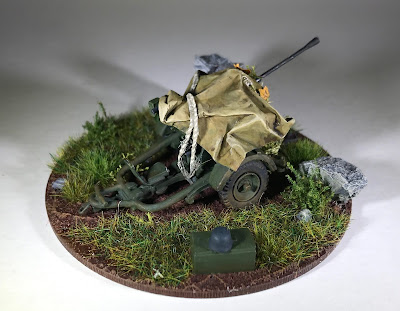 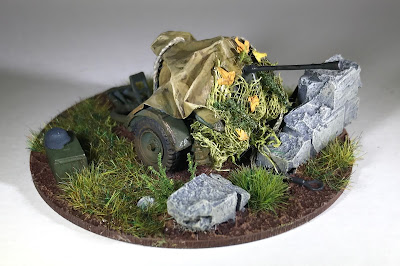 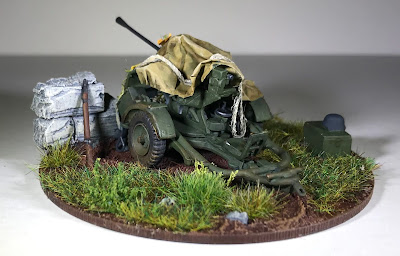 For all its difficulty in assembly, I have to say that I am delighted with the finally outcome, as it started to match the source photograph that inspired it; I just need to remember to be careful with that barrel when handling it!