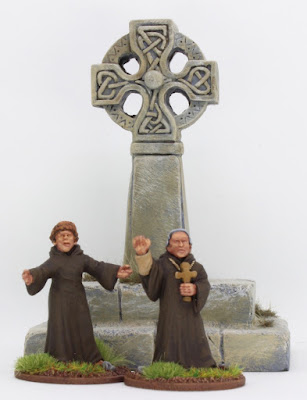 Once again a single word, ‘West’ meant that the interpretation was very open ended and resulted in a considerable amount of head scratching.  Ironically, as still unsure as to which direction I was headed, I initially started preparing a Batman miniature as portrayed by Adam West in the 1960s television series, but as with a great many of the ‘Knight Models’ it required a fair bit of pinning and assembling and I soon abandoned it and went in search of a new idea.

Now I had hoped to showcase the rather splendid Hasslefree Miniatures 'not' representations of Ragnor Lothbrok and his beautiful wife Largertha the Shield Maiden from the thoroughly entertaining ‘Vikings’ aired by the History Channel and available through ‘Amazon Prime.  Sadly this entry, a little like Ragnor and his men, has been blown off course.  The idea was that the North Men had set sail for the west, landing at Lindisfarne and raiding the priory there, thereby securing great wealth and fame in the process.  Unfortunately my submission is but a couple of ‘Conquest Miniatures’ Monks to set the scene, I cannot even claim any points for the Celtic Cross from ‘Ainsty Castings’ as this was already completed before the Challenge had begun.

Whilst I may have struggled in realising my intentions there have been a good many wonderful entries by my fellow Challengers and would encourage you to go and have a look and cast a vote for your favourites here.