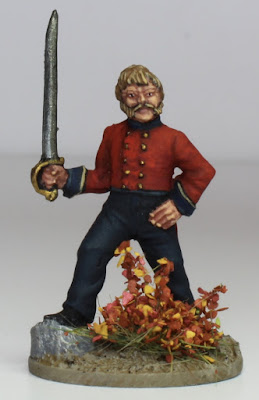 Fabulous gaming day yesterday, although Southern Rail conspired to make the journey there and back harder than it needed to be!  We managed a solitary game of Black Plague, by way of an introduction to new players, but it ended up taking over four hours to complete; a lot of fun and a lot of laughs were had by all.  Although no report from me, I thought that I would continue with another Victorian themed post and share my efforts on a rather splendid miniature from 'Wargames Illustrated'. 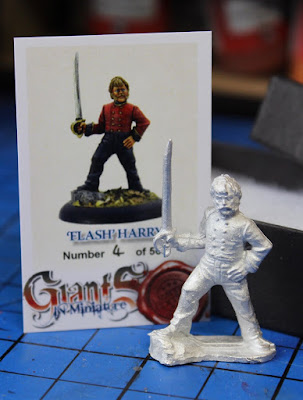 This is one of their Giants in Miniature, a limited edition miniature loosely entitled, 'Flash' Harry.  Quoting directly from the company's website: "‘Flash’ Harry is depicted here in the uniform of an officer from the East India Company on service during the First Anglo-Afghan War but he could equally be found at the Charge of the Light Brigade, out in the American West or amongst European nobility. Considered a hero across the British Empire, he is happy to cultivate this image whilst retaining the ability to flee from battle as often as not. He is known as a fine proponent of the sword and rides very well, in more ways than one. When cornered, he will fight to preserve his life but much prefers the art of fast talking and faster running. As a man, he is a rake and a cad. As a symbol, he is the man others wish to be." 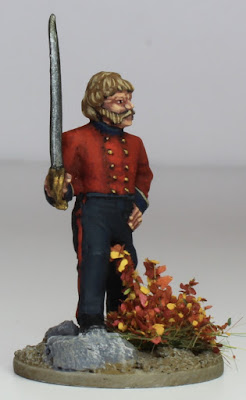 Another one of those 'must have' purchases, 'Flash' Harry seemed another fitting post in a week dominated by the release of Daniel Mersey's Colonial skirmish rules, 'The Men Who Would Be Kings'. 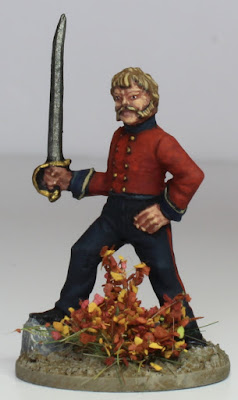 SaveSave
Posted by Michael Awdry at 13:40