“Beware the Jabberwock, my son! 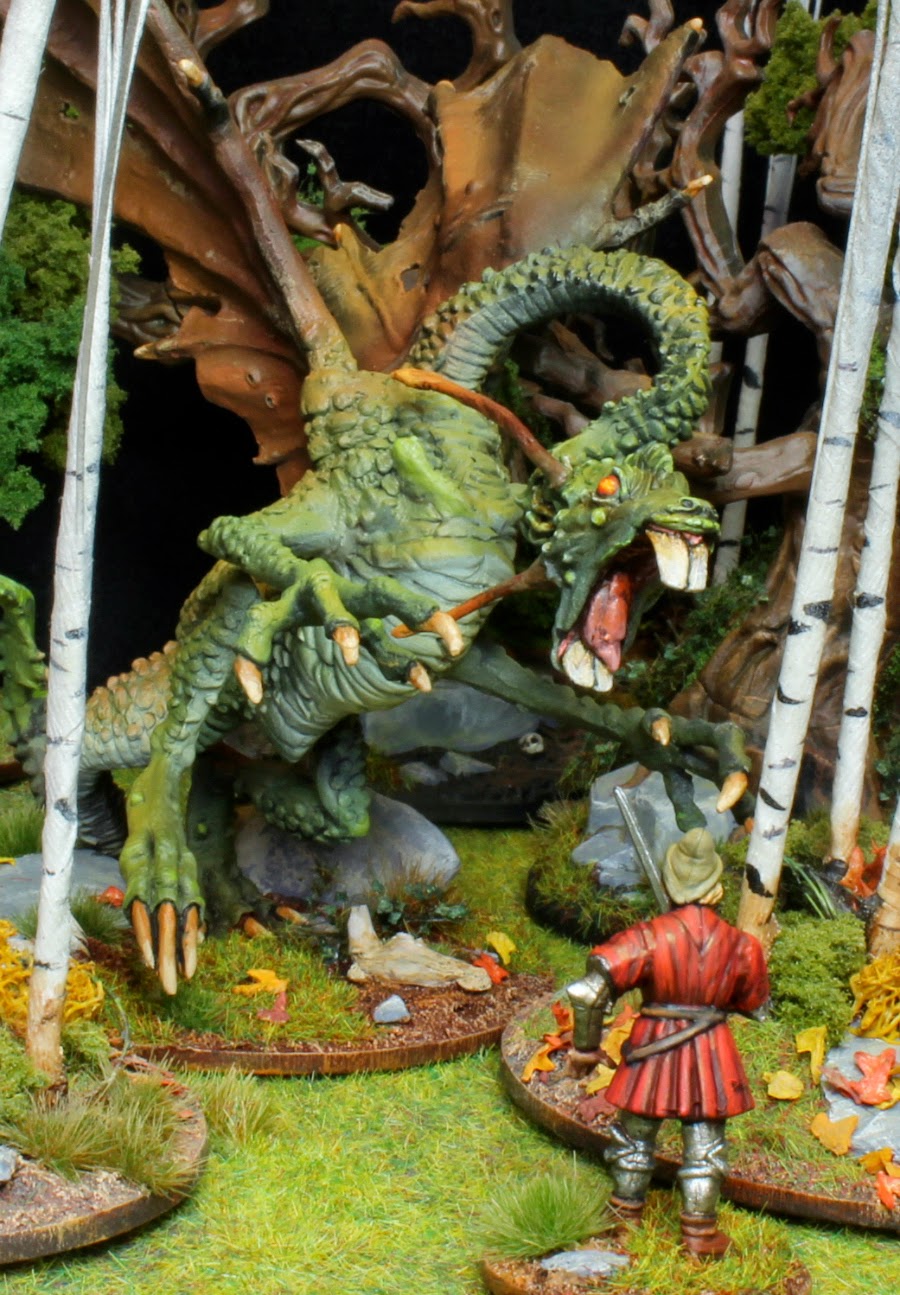 I have to confess that I will not be sorry to see the back of January, difficulty at work and the incessant rain have conspired to produce a gloom that has lingered for far too long over ‘Awdry Towers’ and whilst I have managed to submit miniatures for each of the themed bonus rounds thus far, I am still awaiting to score my first points in the challenge proper.  That said it could be worse, far worse and so without further ado and lashings of self congratulatory nonsense allow me to present the Jabberwocky! 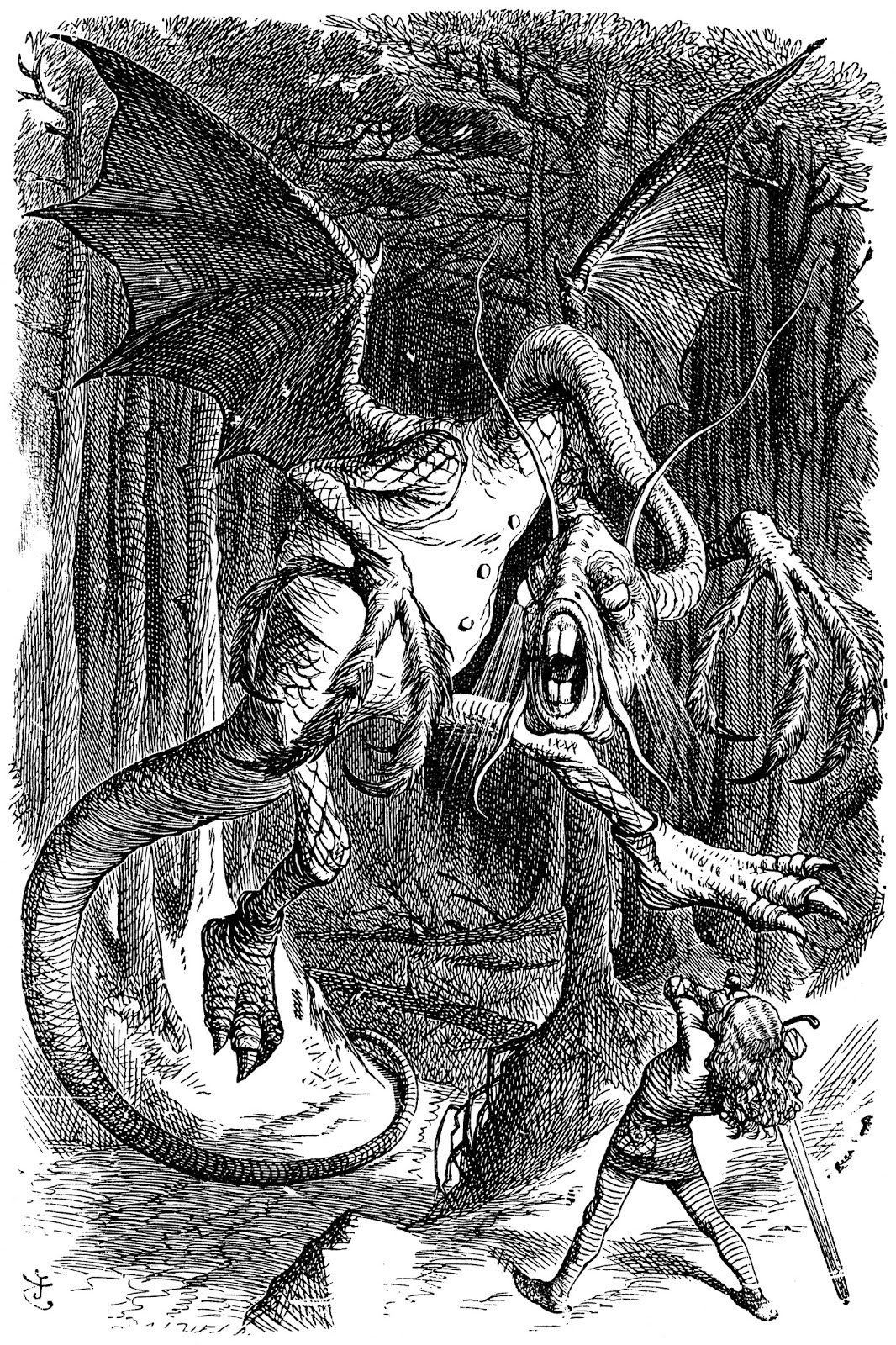 First seen in Lewis Carroll’s, ‘Through the Looking-Glass and What Alice Found There’, published in 1872, the Jabberwocky is, in essence, a nonsense poem, but one with a rhythm and suggestiveness that owes much to ancient Anglo-Saxon poetry.  What starts as a father’s warning to his son of a mythical beast that prowls over the land ultimately becomes a fierce battle before the boy returns, triumphant, to his father and all is returned to normality. 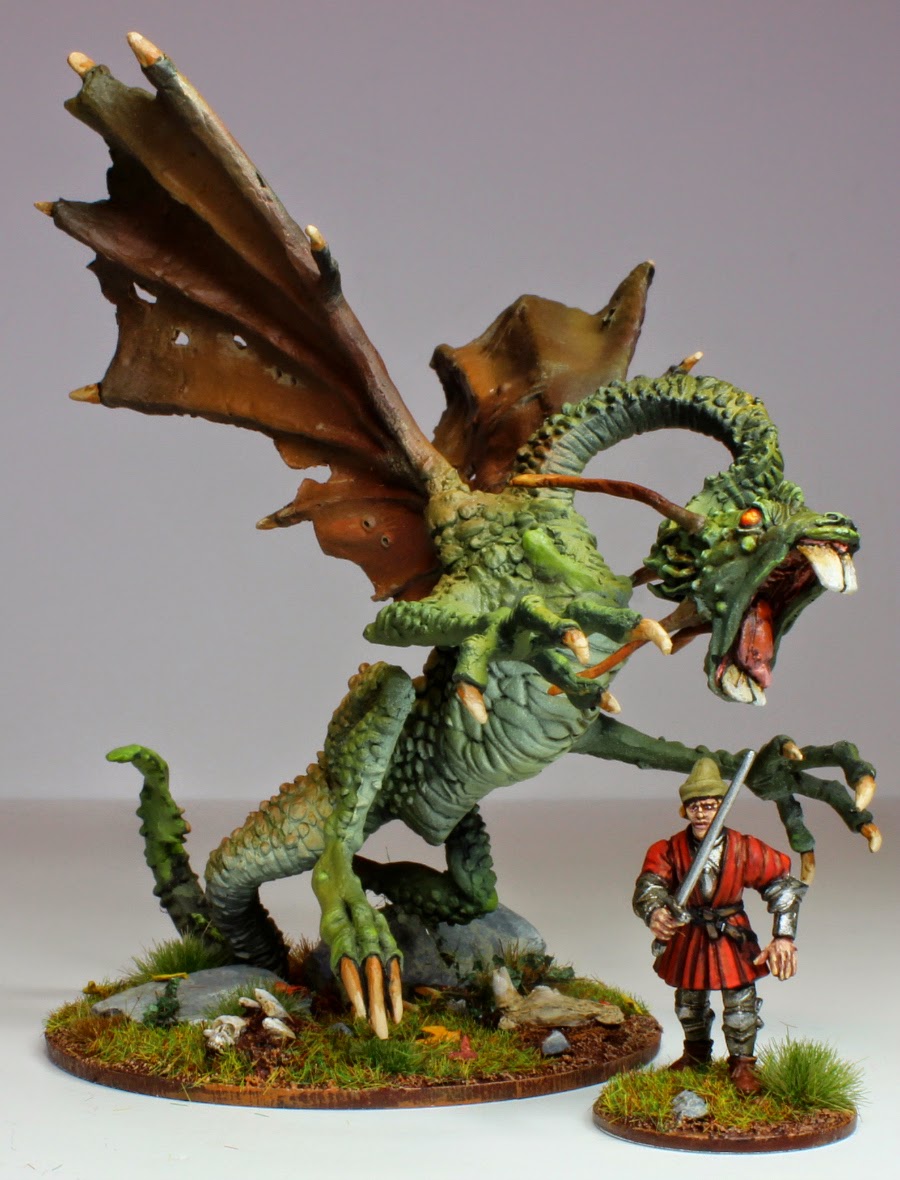 For me the works of the illustrator Sir John Tenniel are synonymous with Lewis Carroll’s writing and it is his depiction of the Jabberwocky, lumbering out of a dark forest to attack its latest victim, that have stayed with me into adult life.  Imagine, then, how thrilled I was then to find this 'Reaper Pathfinder Miniature', sculpted by Jason Weibe; a clear homage to those splendid Victorian Gentlemen.

Now it is worth mentioning at this point that this sculpt was a beast in itself to put together!  By no means a small model there was quite a lot of cleaning up to do; I guess the moulds are not in the first flush of youth?  Once prepared there was substantial pinning and filling required and the decision not to use the metal ‘slotta’ base provided in favour of a ‘Warbases’ 70mm MDF disc, brought with it some concerns regarding structurally integrity and balance.  These were duly overcome with the carefully positioning of small pebbles, a modicum of luck and the occasional harsh word!

Once primed it was time to fire up the shiny new airbrush and set about the base layers, affording me an opportunity to experiment with the blending of colours in a bid to achieve a leathery, almost prehistoric look to the creature’s wings.  The rest of the painting involved steadily building up the layers and picking out the relevant details. 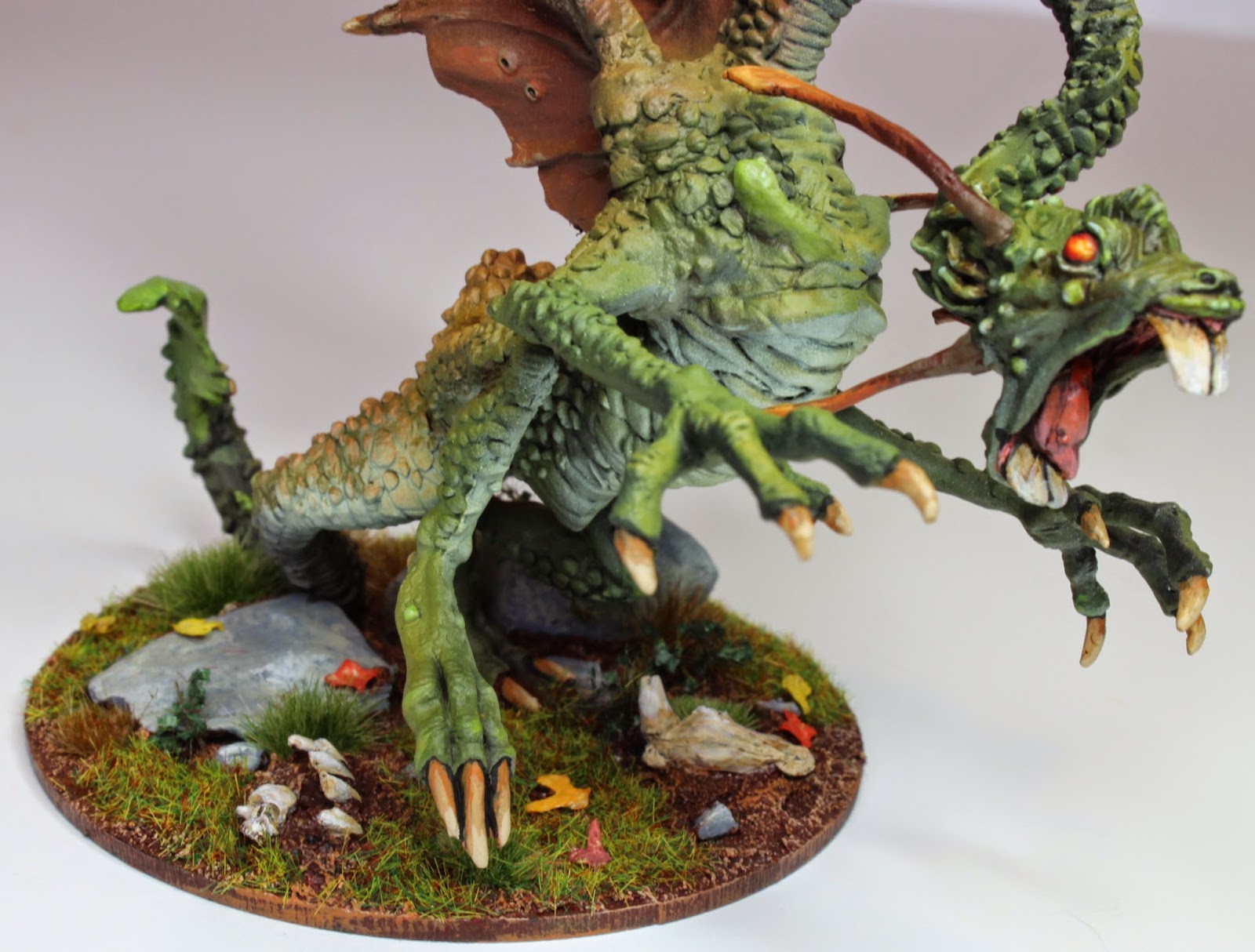 When it came to the basing, I was planning to have a fairly standard woodland base, but a chance comment from the ‘Provost Marshal’ saw me adding evidence of previous victims in the shape of various skulls and bones – a chilling reminder of the ferociousness of the Jabberwocky! 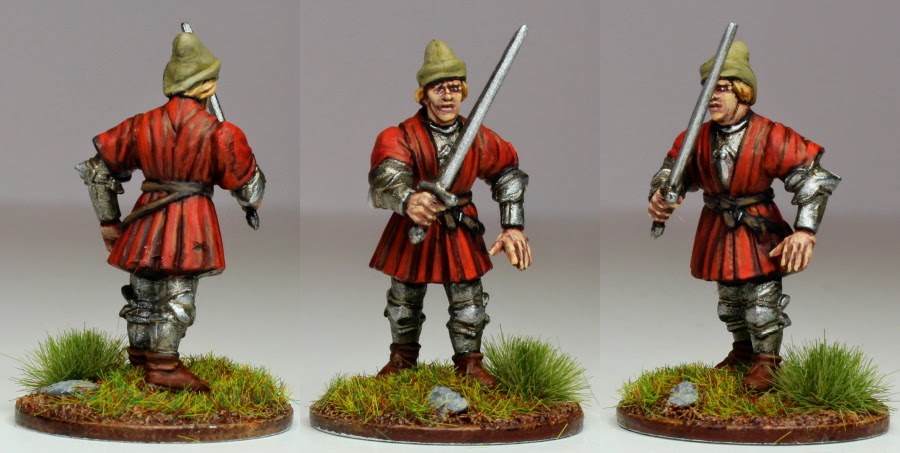 Finally then, to complete the scene, I put together a suitably naïve and youthful looking squire from the ‘Perry Miniatures’ War of the Roses Command Sprue to represent the hero of the piece.  My ‘Challenge’ may have been derailed somewhat by the pressures of ‘real life’, but through the bonus rounds and I am finding plenty of new challenges in both modeling and painting that give me that perfect escape.  That and the continued sense of community, good will and mutual support that pervade in this cosy corner of the blog-o-sphere are truly cherished – I thank you all. 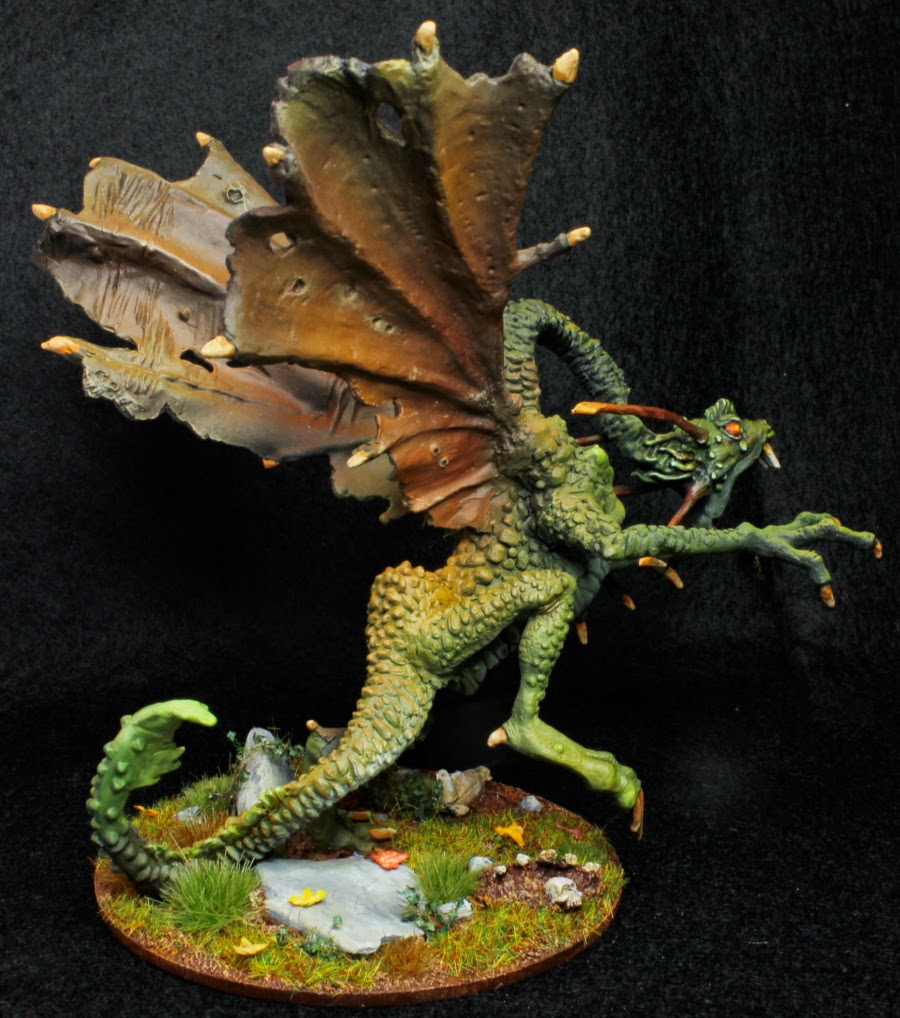 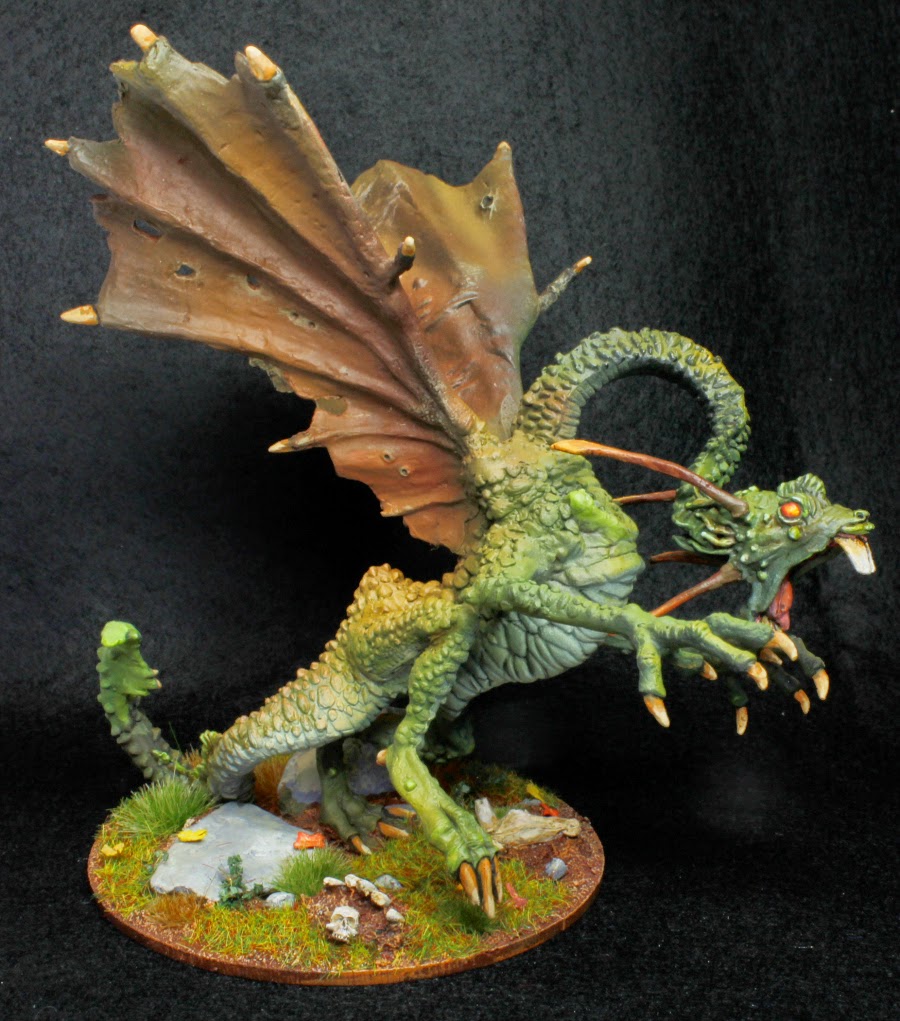 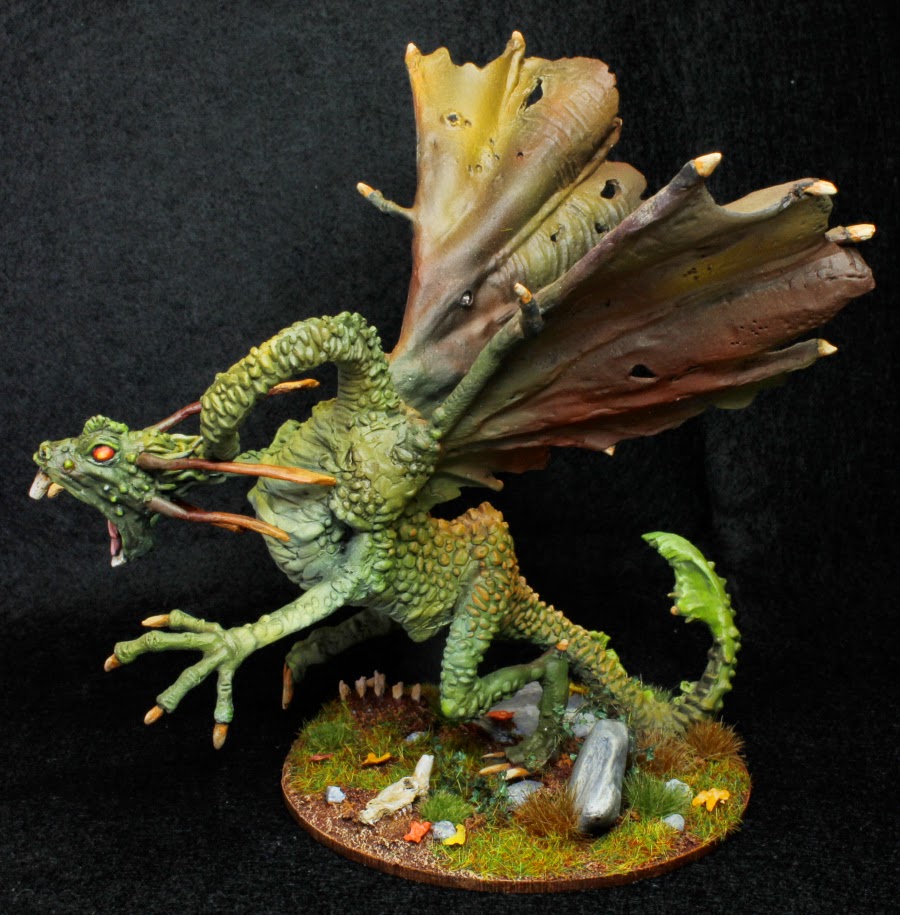 If you can spare a moment or two then do go and look at all the other fabulous entries for this bonus round, perhaps even cast a vote or two for your favourites?  Just click on the link here.

(from Through the Looking-Glass and What Alice Found There, 1872)

He took his vorpal sword in hand;
Long time the manxome foe he sought—
So rested he by the Tumtum tree
And stood awhile in thought.

And, as in uffish thought he stood,
The Jabberwock, with eyes of flame,
Came whiffling through the tulgey wood,
And burbled as it came!

One, two! One, two! And through and through
The vorpal blade went snicker-snack!
He left it dead, and with its head
He went galumphing back.

“And hast thou slain the Jabberwock?
Come to my arms, my beamish boy!
O frabjous day! Callooh! Callay!”
He chortled in his joy.