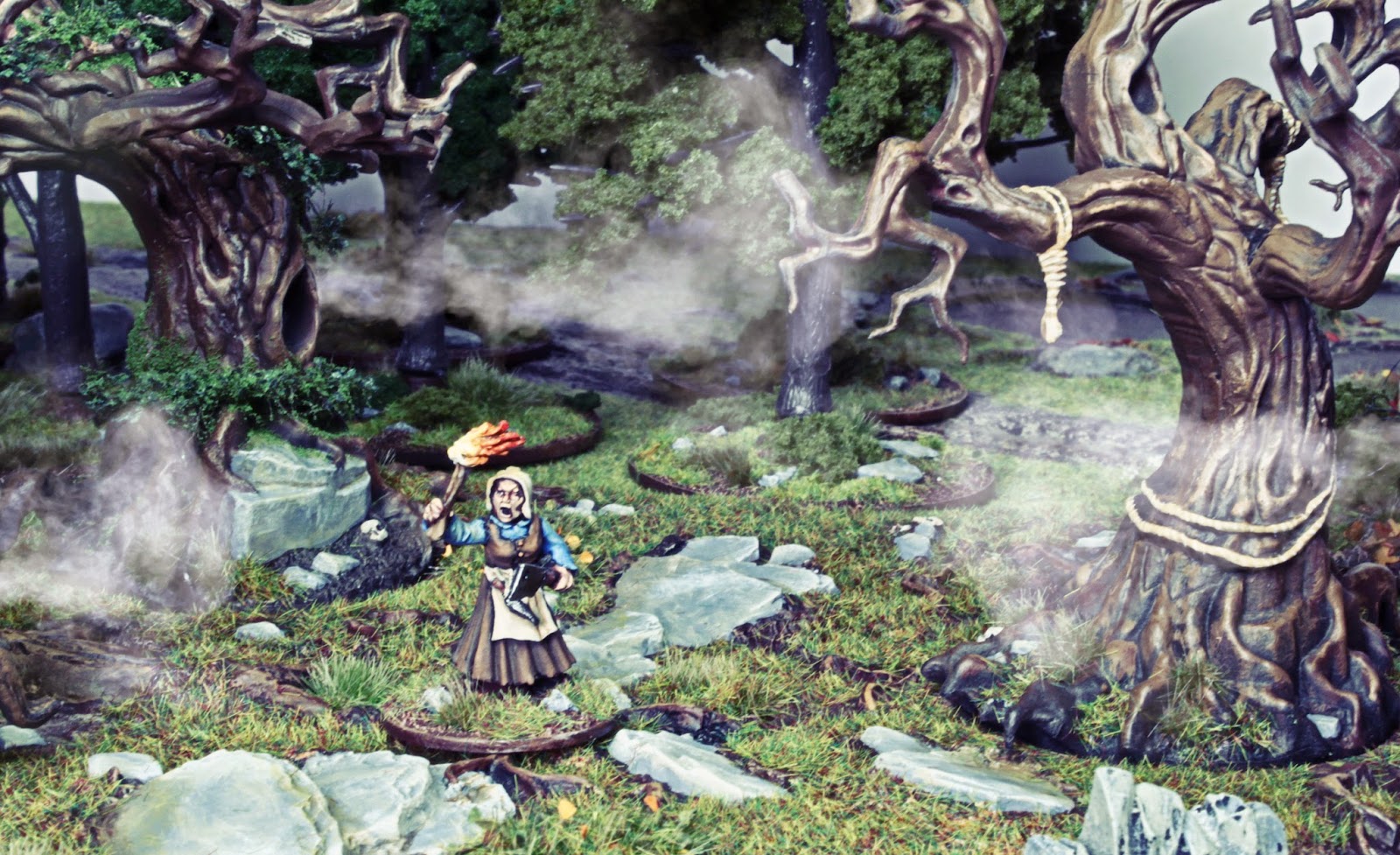 It's funny even without playing a single game, 'Witchfinder General' has captured my imagination.  The combination of Folklore, Hammer Horror style scenarios and a smattering of historical fact has proved too difficult for yours truly to resist and I seem to have got sidetracked with how the game will look rather than concentrating on its actual dynamics.  One such element that I have stubbled to dislodge is a forbidden forest.  From the offset I imagined a place where only a few dared to tread, a place steeped in folklore, a place where death stalks at night; this place exists, deep in the woods beyond the village.

Dead or evil looking trees seemed like a simple idea to make, but I just couldn't get myself organised enough to bring together branches, florists' wire and Milliput all in the same place for long enough and then, by happenchance, I stumbled across these at my local 'Games Workshop' shop, a forest in a box - just what I was looking for.  As soon as I got them home, I stated to realise that my quick fix wasn't going to be a quick as I had hoped and spot of assembling was required.    Not a problem, thinks I, after all I enjoyed slathering glue to plastic aeroplane models as a boy, surely I could cope with a couple of gnarly trees? 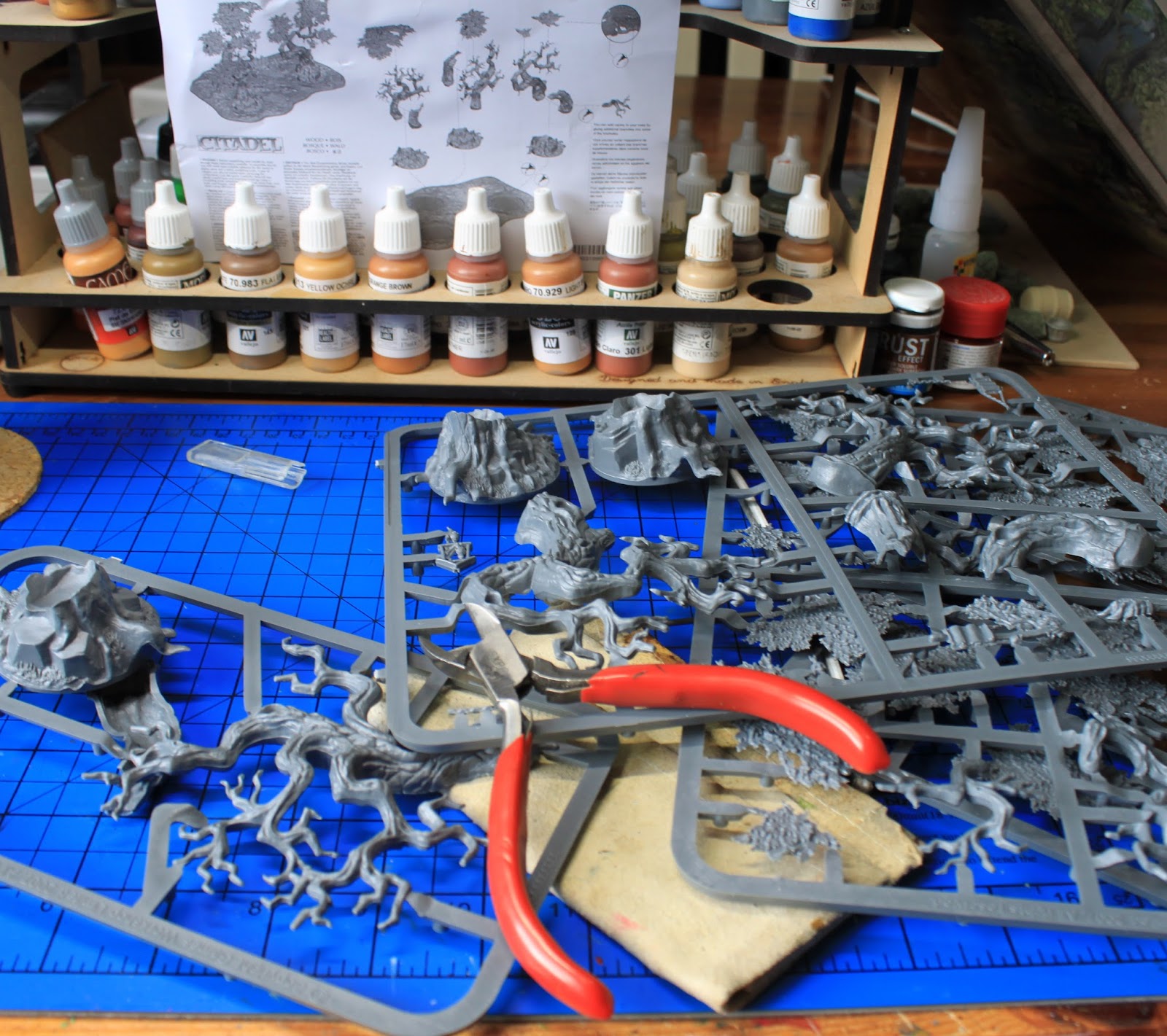 Well they went together alright, but a combination of my eagerness and their moulding revealed some rather unsightly cracks.  Still before long these were filled with liquid green stuff and Vallejo plastic putty and I was revelling in the wonderfully details that are a feature of this terrain piece. 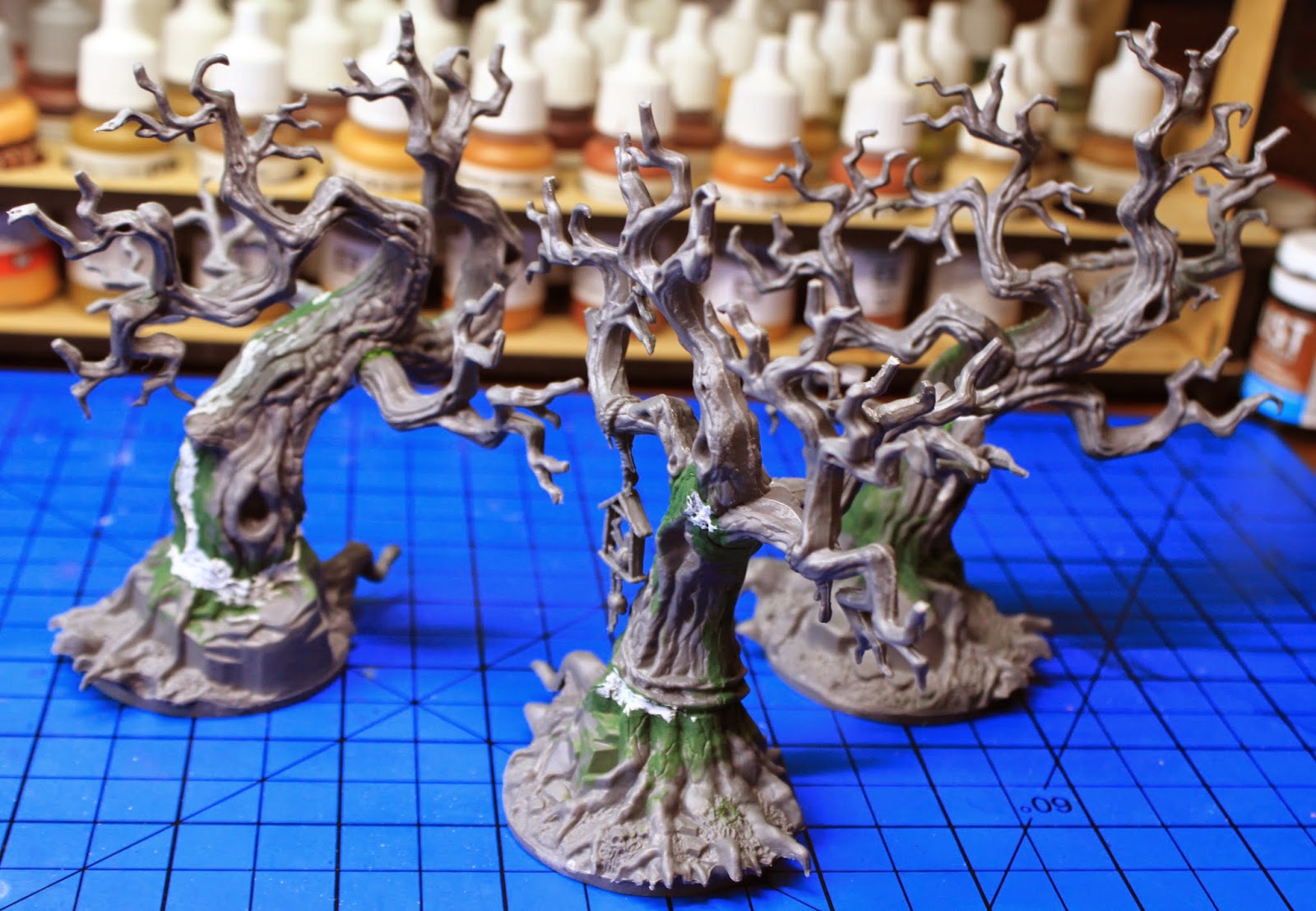 Although given a black undercoat to begin with, I remembered that I had some brown spray paint hidden around the place and this was then applied to the trees as a sort of base coat, it certainly had the effect of speeding things up too.  The base, itself, was painted using the same colours and style that I had been doing with the individually based miniatures, the only difference being that I used cheaper tubes of acrylic paint, bought from 'The Works'* to mix the colours rather than deplete my stock of priceless Vallejo Model Colour.

*The Works, is a discount hobby and craft shop in the UK that sells all manner of goodies! 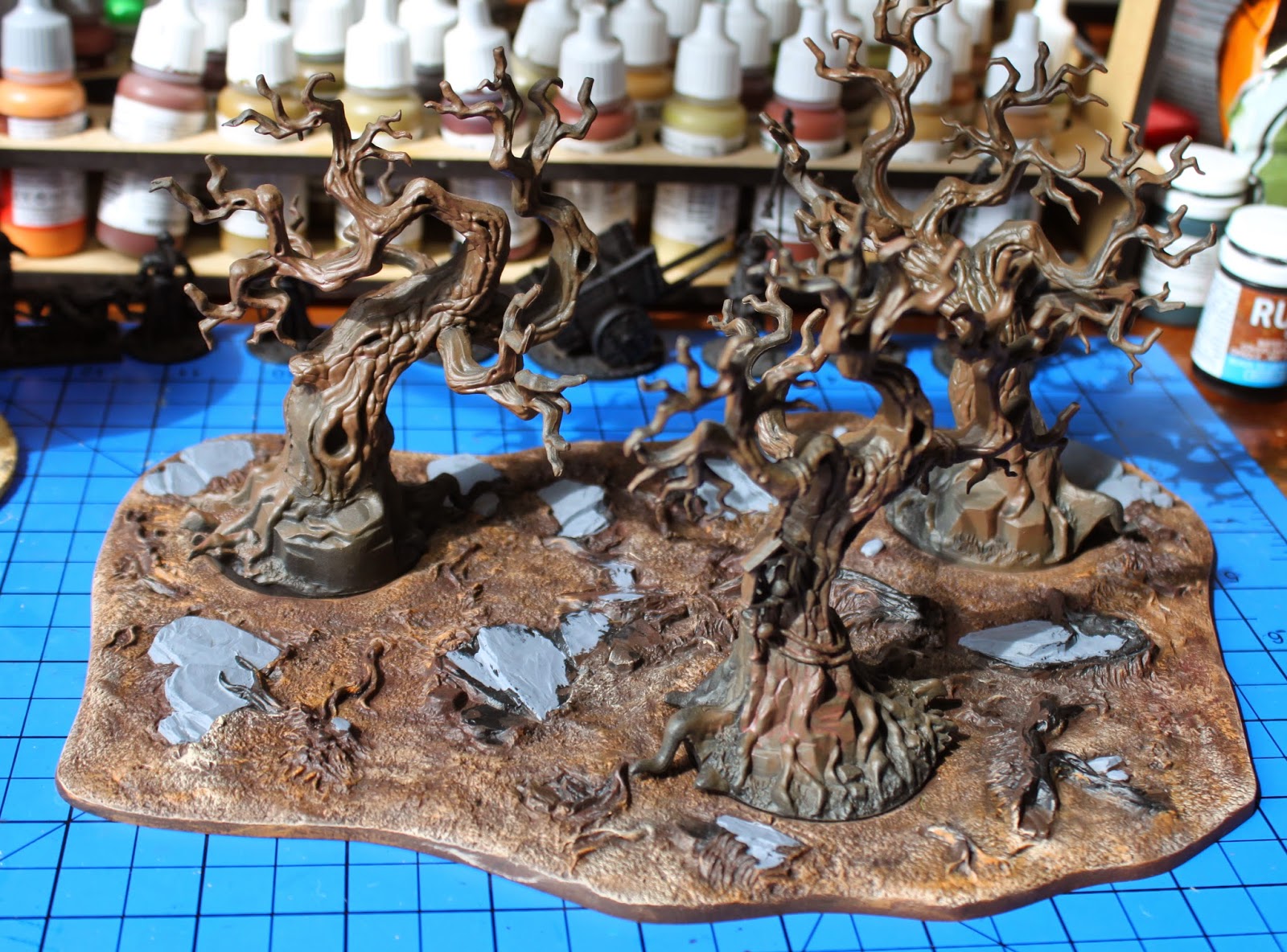 The detailed base is great fun, although possibly not to everyone's tastes, with the addition of tree roots and human skulls liberally deposited.  As far as I was concerned these fitted perfectly with the idea that this was a scary part of the land, so they were definitely to be kept!   As a final touch to the base, I did add a little green dry brushing to some of the slate slabs before a delicate mud wash, which just seemed to locate them more convincingly in the soil.

Following the same 'recipe' for the rocks and stones, the tree sections were then painted up, but I was still faced with the problem of the unsightly gaps.  Although filled they were still annoying me, until I remembered that I had some 'Army Painter' poison ivy - perfect! 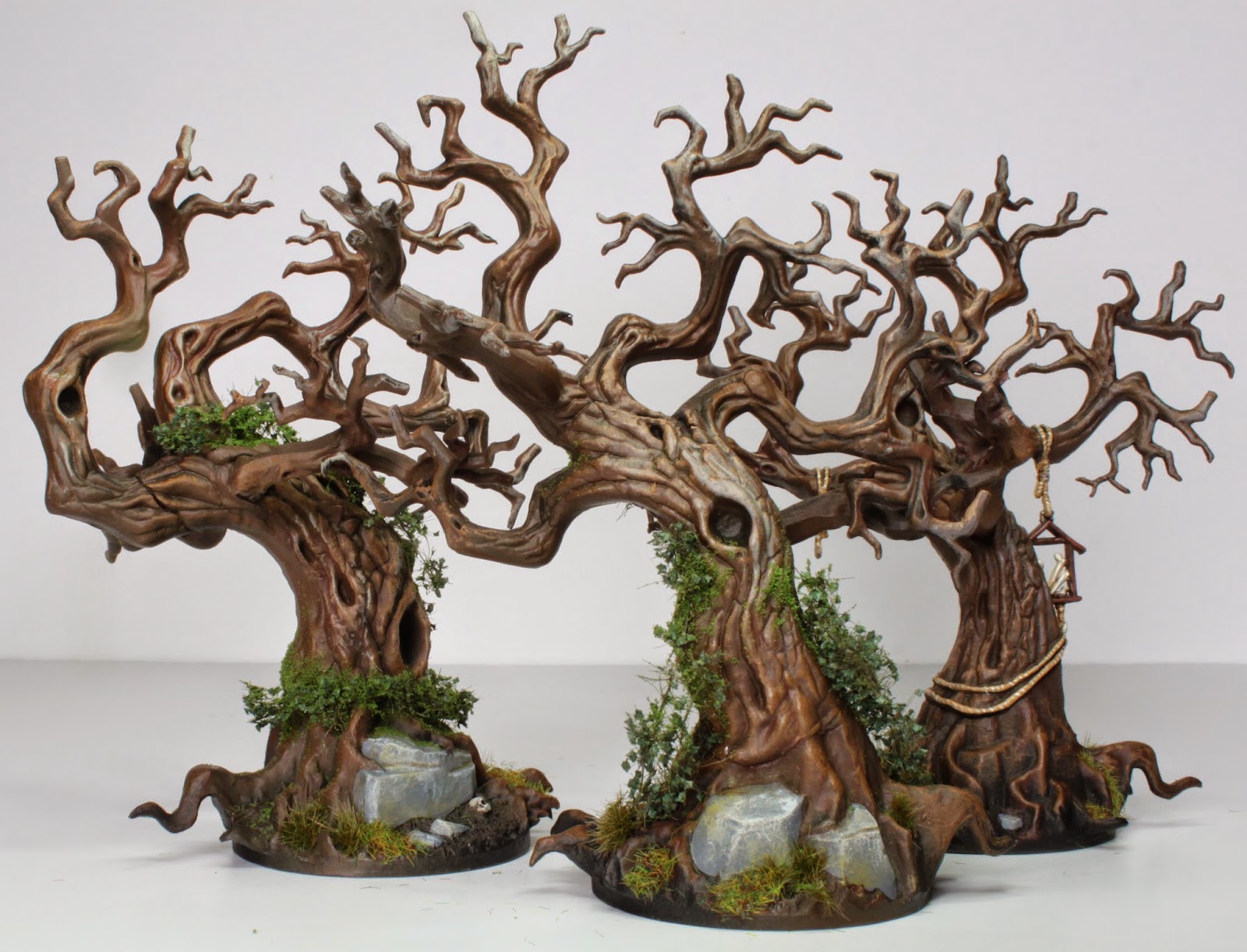 Finishing touches were a few random tufts and some static grass - what could be simpler? 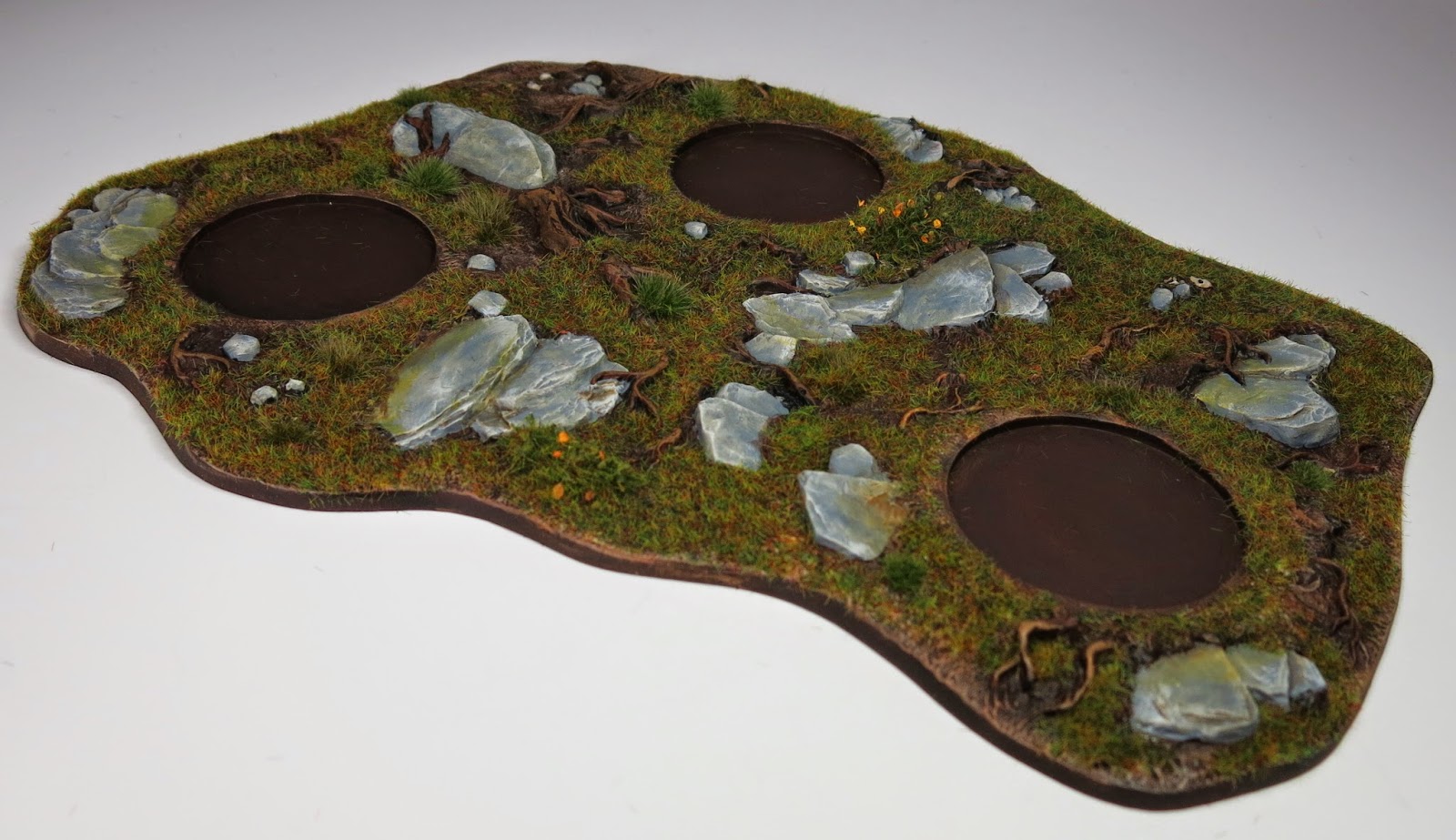 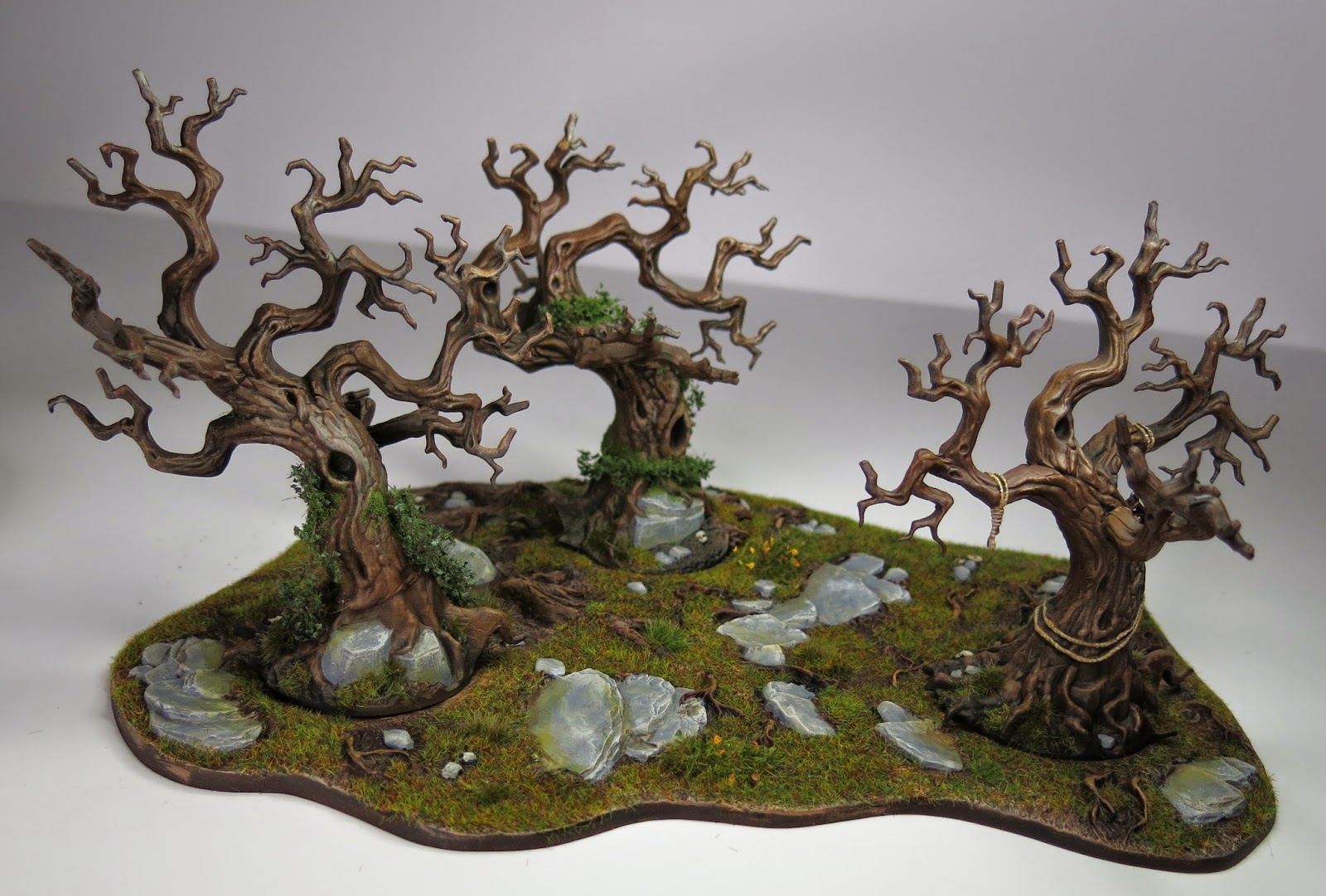 I have to confess that I am delighted with the way that they turned out, they are just what I wanted; if there is a drawback then it is cost.  In my addled brain I imagine a ring of these around a witch's hovel or ruined monastery, but to do that I would need another three packs and that then seems like an awful lot of money to fork out for plastic trees.  I would cleanly be interested to hear of any homegrown solutions for spooky trees, but for the time being, I leave you with these. 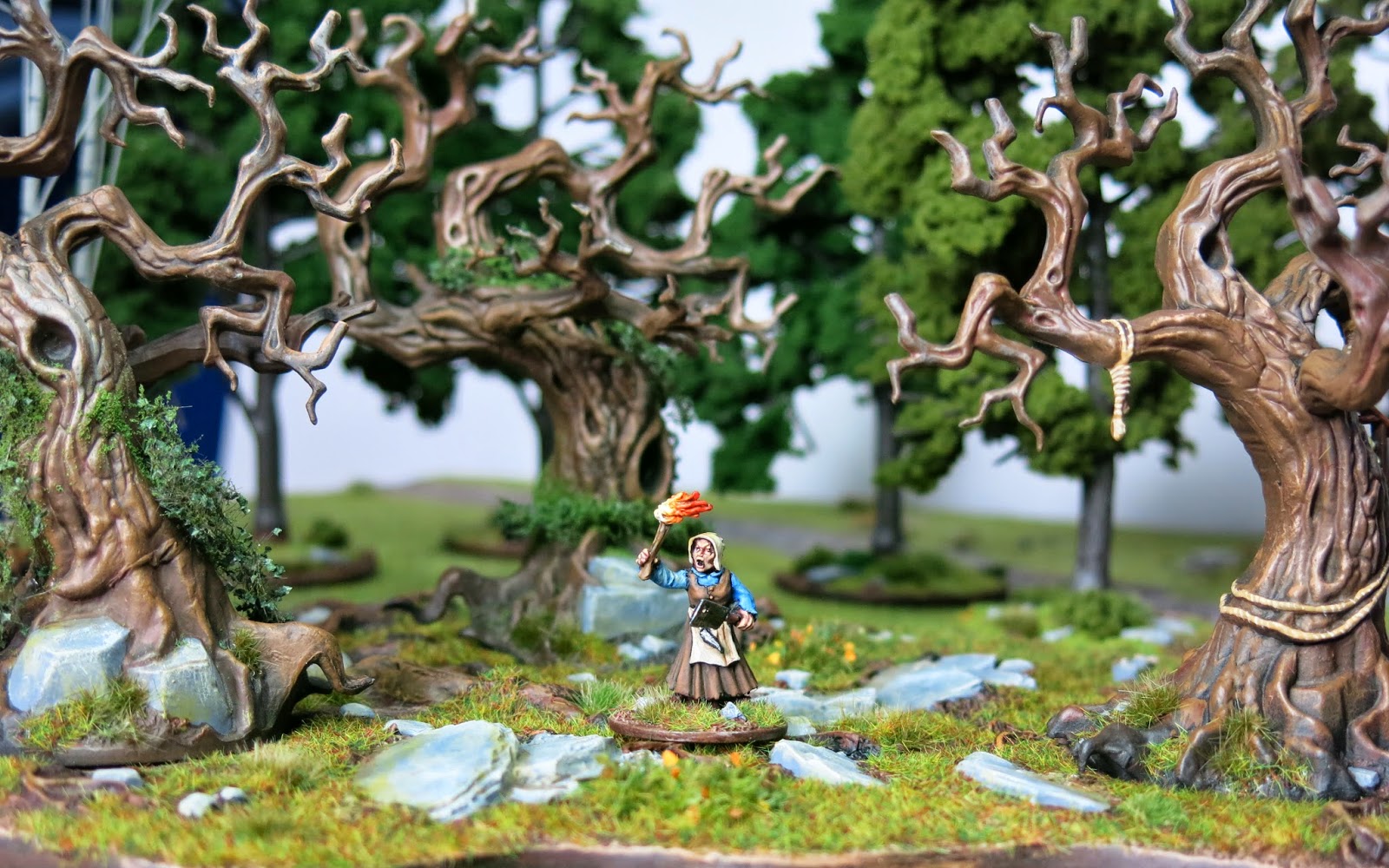