This is technically not really a new post, but just a bit of house keeping in tidying up an earlier post.  Did I mention an elephant? Ah yes the Mutineer Command Elephant or ‘Nellie’ as we like to call her here. I don’t know why I was surprised that this was part resin when you can clearly see on the website that the pack is made of two composites, but surprised I was and a little apprehensive as I have not worked on one of these before. Cautiously cleaned her up and fixed to a ‘Fenris Games’ chariot base.

Little bit of green stuff applied around the trunk but nothing too taxing. Sprayed black thoroughly and then gave a second spray with grey car primer at distance to give a light dusting this was all washed with Games Workshop’s ‘Devlan Mud’ wash. I used a couple of ink washes on the coverings in a bid to achieve a rich depth. Then set about completing the canopy on the howdah. Just a word of warning here – do not glue down the canopy if you are planning on placing your command figures in latter! (I can almost hear you chuckling from here.) The two supporting struts for the Mahout’s canopy were causing me a concern, as they seemed a little unresolved in their casting. In the end I chanced upon some ‘Marks and Spencers’ cocktail sticks. These little fellows had the appearance of been turned in a similar fashion to the other supports and been made of wood I was able to mitre the ends to fashion an exact fit. The Mahout himself is issued with a rather unwieldy club, which I didn’t think matched the splendour of the model, so a little pinch with some heavy-duty pliers and bent piece of metal soon gave me what I was looking for. 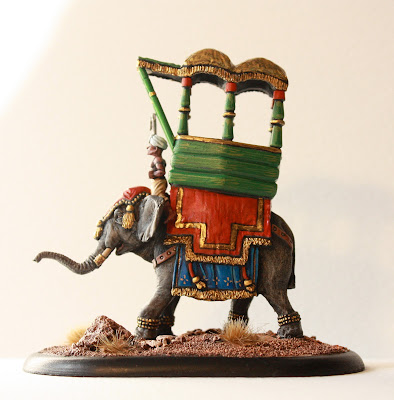 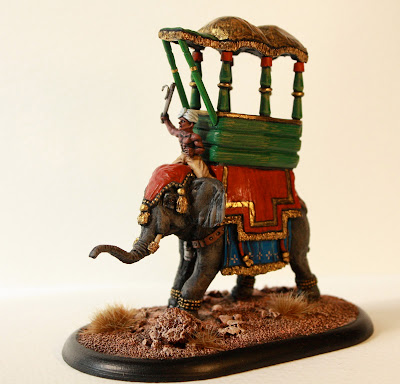 Finishing touches included Mininatur’s Calcareous tufts, late fall (scale 1:45+) again supplied by MM and there we have it.
Posted by Michael Awdry at 10:52