... the Gurkhas are here!
With 'Salute 2012' just around the corner and the need to clear some space before new acquisitions can be smuggled into 'Awdry Towers', I am hopeful that April will see the return of more historical miniatures to the painting table; I say hopeful, but I already know that there are a couple of dinosaur related posts in the offing! 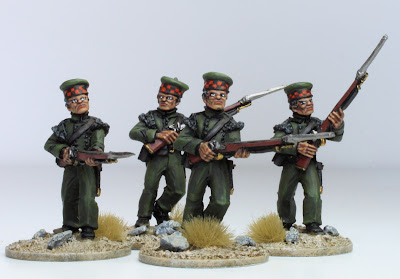 These fearsome warriors are by the wonderful 'Mutineer Miniatures' and I've painted them to represent the Sirmoor Battalion of Gurkhas.  I have long been aware of the reputation of the Gurkha as a formidable and ferocious soldier on the battlefield, but must confess that I knew little of the part they played in suppressing the rebellion of 1857.

The Sirmoor Battalion of Gurkhas, along with the 1st/60th Rifles and the Guides Infantry, fought off twenty six separate attacks on their position at Hindu Rao's House on the Delhi ridge.  They were constantly under fire for a period of three months and eight days, losing a total 327 of 490 men!  This action saw an inseparable bond formed between the men of the 1/60 Rifles and the Gurkhas, ultimately leading the Sirmoor Battalion becoming a rifle regiment after the mutiny.

Returning to the miniatures themselves, the sculpts were of the usual high standard that I've come to expect from 'Mutineer Miniatures'; in fact the only complaint was that there was no pose with an unsheathed Kukri been brandished at the enemy!  I'm hoping that there will be more of these to come, but I've temporarily misplaced the command pack; probably lurking under a plastic dinosaur or the like!
Posted by Michael Awdry at 11:10